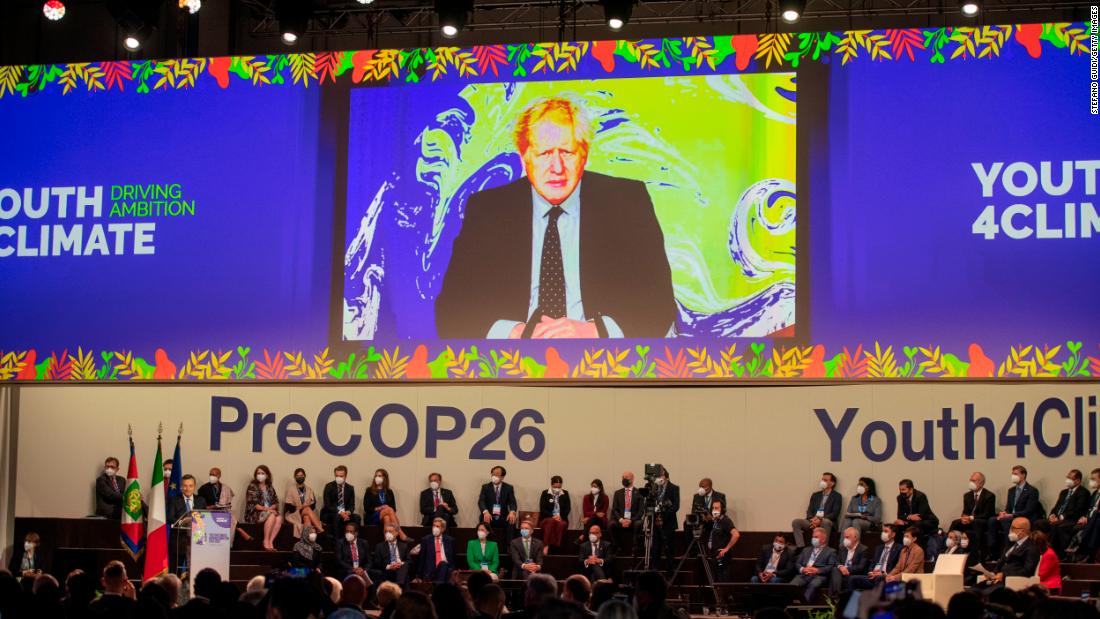 Analysis: In an age of self-interest, Boris Johnson's secret COP26 weapon may have to be shame

It's now less than two weeks until Boris Johnson welcomes the world to Glasgow, Scotland, where he will host the COP26 international climate talks at a crucial moment in our planet's history.

Over the course of a fortnight, the British Prime Minister hopes he can shepherd some of the most powerful leaders on Earth to accelerate reductions in greenhouse gas emissions over this decade.

It's impossible to overstate how important this summit is for Johnson's image internationally. He has claimed, ever since the UK voted to leave the European Union, that Brexit was an opportunity for his country to become a more active member of the global community, leading the way in reforming global trade, the international rules-based order and tackling the climate crisis.

For COP26 to be considered a success, Johnson and Alok Sharma, his COP26 President, will need to see delegates commit to limiting global warming to 1.5C above pre-industrialization temperatures, as opposed to the 2C upper limit stated in the 2015 Paris Agreement. He'll also want dozens more pledges for net zero -- where countries emit no more greenhouse gases than they remove from the atmosphere -- which realistically requires halving emissions globally by 2030. Of particular importance will be commitments from countries who are growing their economies off the back of fossil fuels, such as Saudi Arabia, and China, which is using coal to power its pandemic comeback.

On top of that, he is hoping rich countries will also honor their commitment to transfer $100 billion annually to the Global South to help countries there deal with the crisis they had little hand in creating. Putting an end date on burning coal, boosting plans on electric vehicles and finalizing the Paris Agreement rulebook -- which is still not finished six years after the landmark deal was struck -- would also mean success.

Given the severity of the climate crisis, one might assume that agreement on these issues would be simple. Unfortunately, politics and science have a complicated relationship with one another and, in 2021, multilateralism relies as much on political self-interest as it does on indisputable facts.

"When it comes to climate policy, politics and physics are having an argument that physics will win," says Tom Burke, chair of E3G, an independent climate think tank. 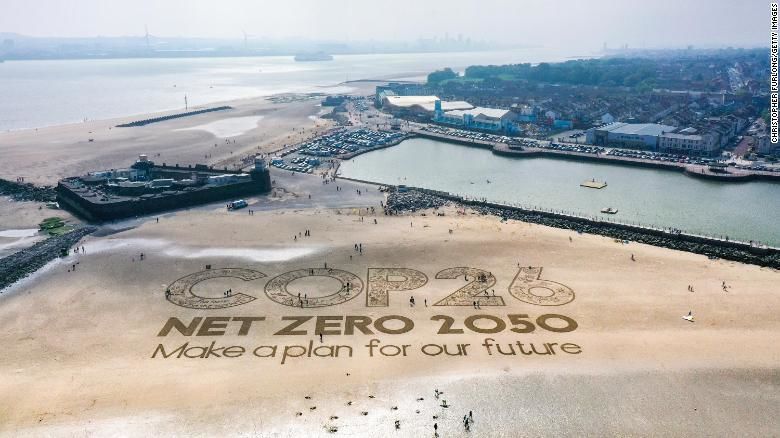 A giant sand artwork adorns New Brighton Beach on May 31, 2021 in Wirral, England, to highlight global warming and the COP26 climate conference.

"Politics will always favor short-term arguments about short-term cost of living and energy security, whereas physics will obey its laws, paying no attention to cost or time. Until the politics conversation is more realistic about what needs to be done to transform our economies -- which will actually provide more economic opportunity -- this losing argument will continue."

Burke believes that the only way a successful climate policy can be achieved is by countries pooling their sovereignty -- as happened with the Marshall Plan to rebuild Europe after World War II, for instance -- so that every country is as invested as the next.

However, he says that as the memory of that war fades, "people are forgetting that the global Western order was formed to avoid repeating the mistakes of the past."

"There are few willing to make a case to their electorate" for pooling sovereignty, Burke said, in the face of domestic political issues that matter to voters more than issues in the wider world. A good example of this is the current energy shortages hiking consumer prices.

Beyond concerns about individuals heating their homes, some analysts also believe that powerful nations have become more insular over the past decade or so.

"After the Cold War, the argument for internationalism was easy to make, as people could see the benefits of cheaper goods and greater work opportunities," Alexander Stubb, former prime minister and foreign minister of Finland, told CNN. "After the financial crash, many believed that it was the same globalism that had cost them their jobs, homes and prosperity."

This fear and anger at the wider world breeds the sort of grievance politics that can lead to isolationism.

While Brexit was about more than Britain raising the drawbridge, it is undeniable that a large chunk of the vote came from people who felt left behind and failed by a modern, open world in which they saw no place for themselves.

Donald Trump's victory in America the same year was again more complicated than any single issue, but his isolationist America First politics fed a resentment towards globalization and US troops dying in foreign lands. So successful was Trump in feeding this beast, his successor adopted many
Trumpian foreign policy stances in places like Afghanistan and China.

In this age of self-interest, is there hope that multilateralism could return to save the planet? Stubb says that appealing to the self-interest of the populous is a good starting point.

"You need to make people feel they are living better lives, be it they are richer or more comfortable because of globalization," he says. "That can be because of greater choice in things they buy or because of jobs and subsequent wealth brought to their areas through regeneration projects." 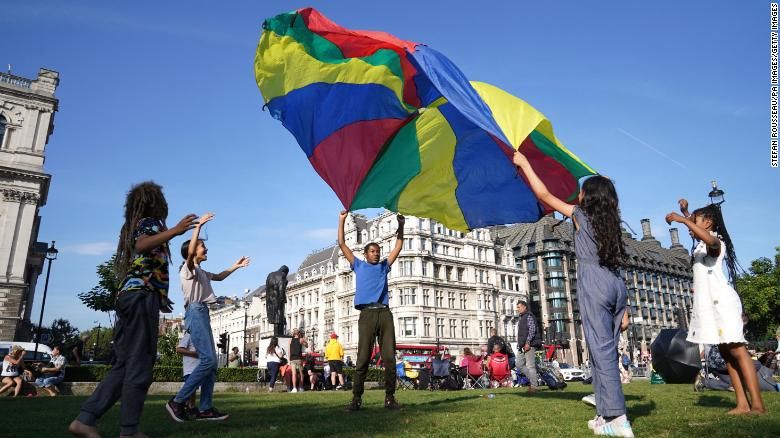 Children to gather at Parliament Square in London to read their Letters to the Earth, ahead of the Cop26 summit in Glasgow, on Sept. 8, 2021.

Mark Leonard, director of the European Council on Foreign Relations and author of the book "The Age of Unpeace: How Connectivity Causes Conflict," explains that going green can be spun not just to citizens, but governments, as serving their own national interest.

"The trick is to make these things beneficial for the country's national affairs. They can either be in control of their energy revolution or watch other countries steal the march on them. They could also find their economies less competitive in coming years."

He acknowledges that this is hard, particularly in the current political climate that surrounds COP.

"Science has been undermined by so many national leaders over the past year," he says, adding that collective responsibility on issues has been replaced by "powerful countries doing what they want while smaller countries suffer," something that can clearly be seen in the distribution of Covid-19 vaccines, for example.

Leonard does see a silver lining on selling climate change to even the most cynical of leaders, however.

"Quitting carbon can put some in a strong position as it decreases their dependence on others. They could make money out of it by being the first to a new technology. It is possible that good things can come out of naked self-interest."

In an absence of altruism, Johnson could appeal to his fellow leaders' sense of shame. Shame is a powerful tool, which played a central role in the success of the Paris Agreement six years ago.

Mary Robinson, a former UN High Representative on human rights and campaigner for climate justice, says that the success in Paris could not have been achieved without one person.

In 2015, ahead of the Paris summit, Tony deBrum, then foreign minister of the Marshall Islands, asked his counterparts why his country should disappear simply because they refused to cut their carbon emissions by 1.5C.

"Among all the boring speeches and statements, he stood out by simply asking why the others believed his country should be consumed by the ocean. It was so powerful that we elevated his voice in Paris. We marched in the streets under the mantra '1.5 to stay alive' and forced a conversation about the difference between 1.5C and 2C," she says. "I don't believe we would have got there without him."

COP26 is a huge moment for the world, but also Johnson personally. Even in his own country, there is criticism of his climate plans, which are arguably the most ambitious of any major economy. Prominent members of his own Conservative party are demanding to know exactly how he plans to pay for them and are viewing the financial cost as more important than the environmental.

Convincing less-wealthy countries that are growing their economies to not burn fossil fuels in the same way the UK and its Western allies have over the past century really is a tall order.

There is a narrow path out this mess: If the world's richest agree to fund the rest going green and can argue the case for doing so to their domestic audience, there is hope. However, it will require a combination of arm-twisting, shaming, and making uncomfortable compromises with countries like China and Saudi Arabia that are commonplace in modern diplomacy.

Ahead of COP26, we are presented with a bizarre prospect.

It is entirely possible to fix the climate crisis. All it should require is for the people who live in the world to want to save it. Yet in 2021, consensus on climate will only come if Johnson can convince those in power that they'll be better off than their rivals.