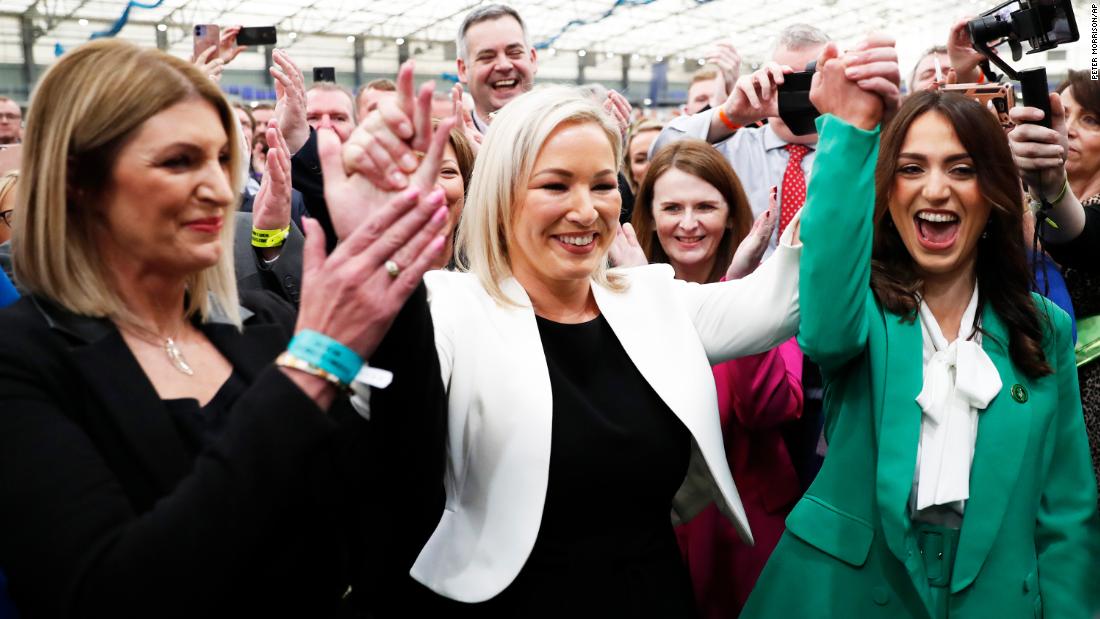 Analysis: Boris Johnson's unsolvable Brexit problem is coming back to bite him

As the British parliament returns on Tuesday to the backdrop of inconclusive local election results and the ongoing "Partygate" scandal now impacting both Boris Johnson and the leader of the opposition Keir Starmer, there's one major headache facing the United Kingdom that might not get the look in it deserves: making Brexit work.

Specifically, making Brexit work in the part of the UK that has been arguably most affected by leaving the European Union, Northern Ireland.

Brexit always meant that Northern Ireland would leave the European Union, along with the rest of the UK. Unlike other parts of the country, however, it shares a land border with the EU on the island of Ireland.

The EU has some of the world's strictest food regulations and, with the UK now allowed to set its own standards, Brussels was concerned that sub-standard goods could enter the union's single market via the Irish land border.

Efforts were made to prevent the need for a customs border that would prevent the flow of goods, particularly foods, between the two countries for two key reasons. 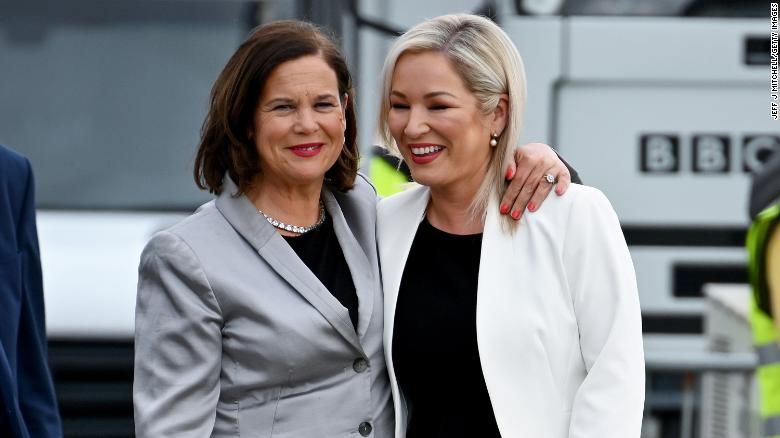 First, trade between the Republic of Ireland and Northern Ireland is crucially important to the way of life in both countries.

Second, the idea of any physical border infrastructure between the two, even if it was just for customs checks, could run the risk of a return to sectarian violence on the island of Ireland, something everyone wanted to avoid.

With this in mind, the Northern Ireland Protocol was agreed by Johnson and the EU in 2019, which would get around the issue by keeping Northern Ireland within the EU's regulatory sphere, thereby allowing that border to remain open.

That's all well and good for trade on the island of Ireland, but what about products traveling into Northern Ireland that could then carry on into the EU?

Johnson agreed that in order to keep the Irish border open, goods traveling from Great Britain would be checked before entering Northern Ireland, thereby creating a sea border between Northern Ireland and the rest of the UK.

Unionists in Northern Ireland, especially the Democratic Unionist Party (DUP) who had supported Johnson throughout the process, felt they'd been thrown under a bus and that the Prime Minister was effectively handing Irish Republicans the excuse they needed to push for a border poll, unifying Ireland.

Johnson's government has mitigated these concerns by delaying the full implementation of the protocol numerous times, something the EU has described as illegal, describing it as a breach of the Brexit withdrawal agreement. 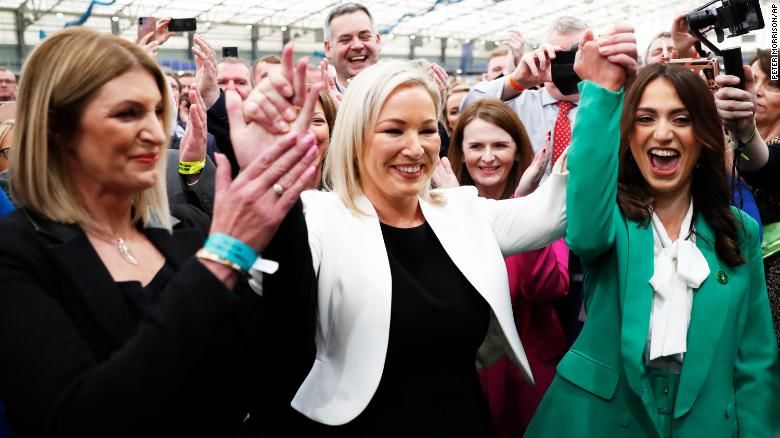 O'Neill (center) celebrates with party colleagues after being elected at the Meadowbank election count center in Magherafelt, Northern Ireland, on May 6.

All of this brings us to last week, when Northern Ireland voted in legislative elections and for the first time ever, made Irish nationalist party Sinn Fein the largest group in Stormont, Northern Ireland's devolved parliament, holding 27 seats compared to the DUP's 25 (there are 90 seats in total).

Steve Aiken, a member of the Northern Ireland Assembly for the Ulster Unionist Party, believes the domination of two parties at the extreme ends of the Unionist-Republican divide means the protocol can now be weaponized by either side.

Michelle O'Neill, who leads Sinn Fein in Northern Ireland and is Vice President of the party, has previously said that there is "no credible alternative to the protocol" and has called on the UK government to find a way to make it work.

The rhetoric that Aiken referred to ranges from the EU taking legal action against the UK; the UK threatening to unilaterally trigger Article 16, which would suspend parts of the protocol; Sinn Fein's position, which is the protocol implemented in full; and that of the DUP, which is currently refusing to join Sinn Fein in government unless the protocol is dropped.

These hardline positions, particularly those of the UK government, have become a particular area of concern for groups who want negotiated agreement. 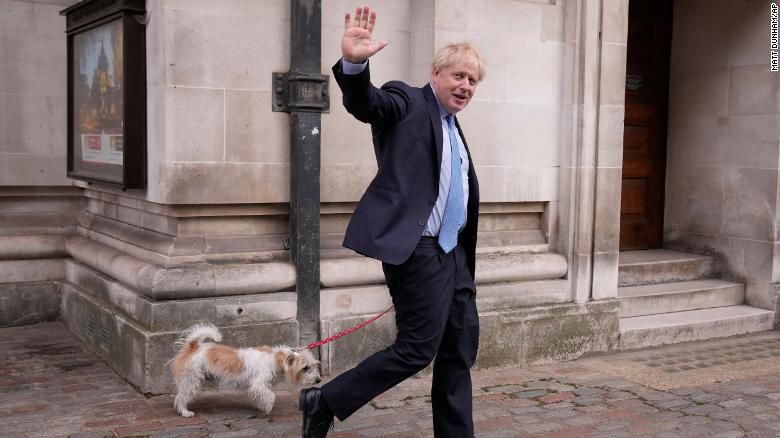 UK Prime Minister Boris Johnson waves at the media as he leaves with his dog Dilyn after voting at London polling station on May 5.

"For the UK, the protocol has become so politically symbolic that it seems unprepared to negotiate anything that could be interpreted as a concession to Brussels," said Katy Hayward, professor of political sociology at Queen's University, Belfast.

This has baffled many in Brussels, as the protocol itself was initially hailed as a huge political success for Johnson. And as Hayward notes, the EU has "presented fact sheets" on customs and other regulatory measures, indicating "there is still some flexibility on the EU side" that Johnson could present as a win.

Instead, talk of Article 16 and scrapping the protocol persists, even after Northern Ireland's election results -- highlighting the extent of division. A senior UK government official told CNN that they believe Article 16 will be triggered sooner rather than later, it's just a matter of how it's done.

Johnson's spokesperson confirmed on Monday that the Prime Minister would leave the unenviable task of talking to the various parties in Stormont about forming a government to someone else. 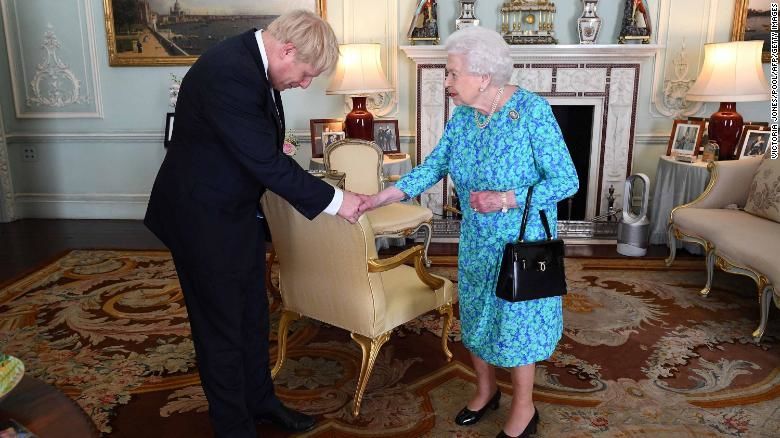 Britain's Queen Elizabeth II welcomes Johnson, the then newly elected leader of the Conservative party, during an audience in Buckingham Palace, London in July 2019.

One of the challenges facing anyone seeking to smooth over divisions in Northern Ireland right now is that on a very surface level, the Republican argument favors the EU full implementation solution, while the Unionist solution sits with fixing the protocol, superficially the position of the UK government.

The problem is that, triggering Article 16 doesn't achieve a great deal. It would initially mean 30 days of negotiations at the end of which it's unlikely the protocol will have changed substantially -- which is not helpful to the DUP, currently refusing to form a power-sharing executive.

Meanwhile, the EU is reasonably saying the UK is trying to rewrite a treaty it negotiated.

The reality is that Northern Ireland is a complicated place with a complicated history and in order for people to live in relative peace, endless patience is required.

"As with the Belfast Agreement, continual flexibility is required on both sides," says Hayward about the accord also known as the Good Friday Agreement. "Ever since the Brexit vote, however, the UK has tried to keep the EU as its perpetual bogeyman."

And unfortunately for people living in Northern Ireland, that constant state of tension has consequences for people outside of the political classes of London and Brussels.