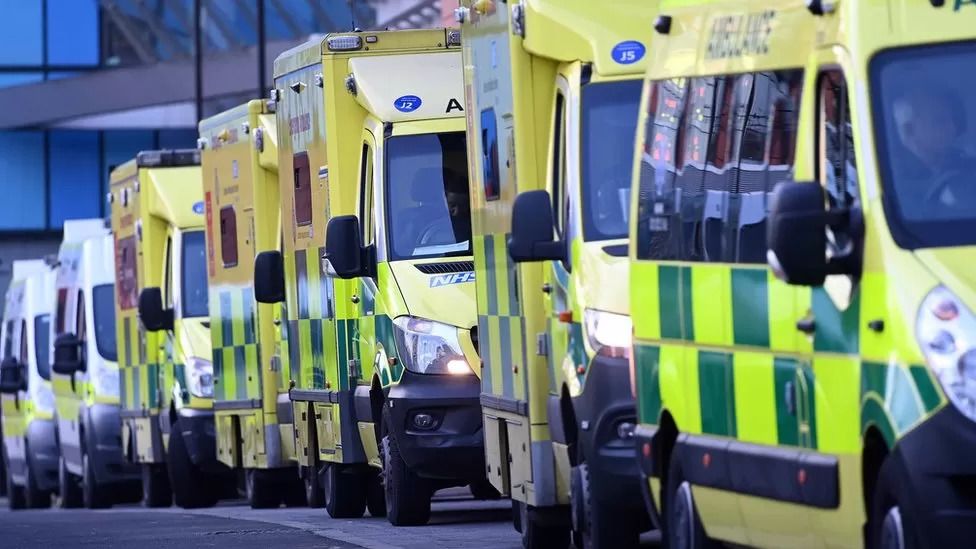 Ambulance staff on strike in England and Wales

Ambulance staff belonging to three unions - GMB, Unison and Unite - are on strike in a dispute over pay.

In line with previous industrial action, life-threatening 999 calls will be attended to, but other emergencies may not be, or could face delays.

The biggest day of industrial action for the NHS in this dispute is set to happen on 6 February, when nurses will walk out too.

NHS staff in England and Wales - including nurses - have already received an average increase of 4.75%. The lowest paid were guaranteed a rise of at least £1,400.

The Welsh government offered a one-off payment as a way to avoid strike action, but that was rejected by unions.

Fourteen health unions, representing more than a million NHS workers in England, have said they will no longer work with the NHS Pay Review Body on discussions about the next (2023-24) pay deal until their current demands are met.

In Scotland, a pay offer averaging 7.5% has been accepted by some unions.

In Northern Ireland, the government has said it will give a 4.5% uplift to pay, backdated to April 2022. That is a below-inflation increase for most workers. Pay disputes continue.

He added: "I have had constructive talks with unions about this coming year's pay process for 2023-24, and am keen to continue talking about what is affordable and fair."

Speaking on Sky's Sophy Ridge on Sunday, Unite general secretary Sharon Graham said the government was willing to "talk about anything, but they won't talk about pay".

Meanwhile, Unison general secretary Christina McAnea said a "solution" to the strike was "staring the government in the face".

What 999 care will be provided?

The advice remains to call 999 in an emergency.

The most life-threatening situations - such as cardiac arrest - will be responded to by an ambulance.

Conditions which are serious but not immediately life-threatening might not be attended straight away.

Less urgent calls - such as a woman in late-stage labour - will not be prioritised.

Those who have a fall, or suffer other non-life-threatening injuries, are unlikely to receive 999 care. The NHS 111 service is available. 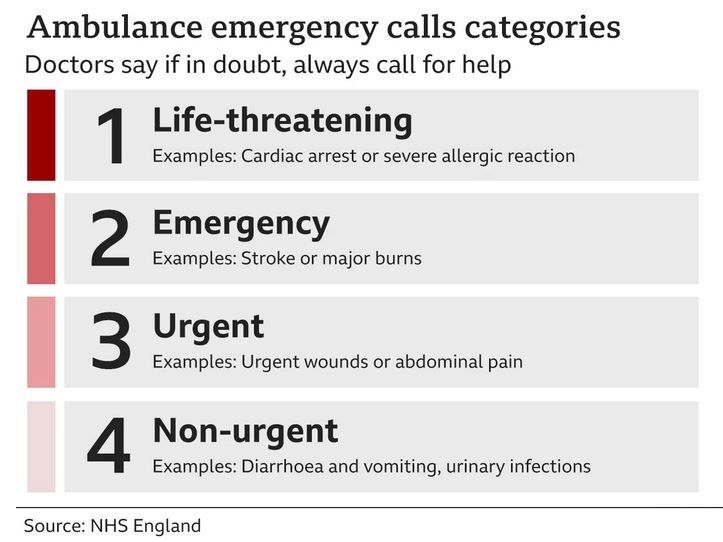 Which parts of the UK are affected?

Some ambulance staff in the GMB union are on strike in the West Midlands.

Meanwhile the action by Unison affects London, Yorkshire and the north-west, north-east and south-west of England.

Members of Unite are walking out in the West Midlands, East Midlands and north-west and north-east of England as well as in Wales.

When are the next strikes?

Ambulance trust workers will be striking on:

What patients need to know

* People seriously ill or injured, and whose life is at risk, should call 999 as usual, or call 111 for non-urgent care


* Other services, such as some cancer treatments or urgent testing, may be partially staffed


* More routine care is likely to be badly affected, including planned operations such as knee and hip replacements, community nursing services and healthvisiting


* GPs, community pharmacies and dentists will be unaffected