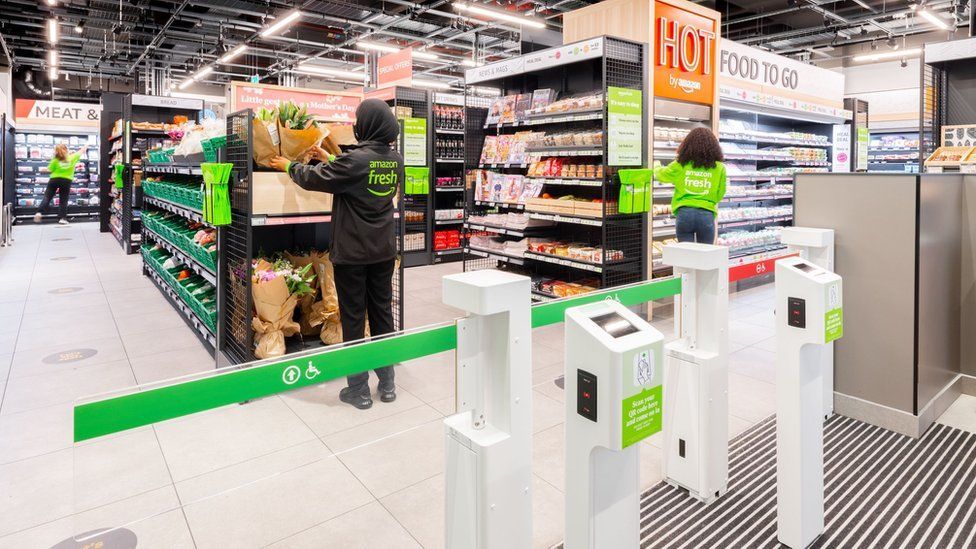 Amazon has opened a till-less grocery store in London - its first "just walk out" shop outside the US.

Visitors to Amazon Fresh scan a smartphone app when entering and are automatically billed as they leave.

The store stocks hundreds of own-brand items as well as third-party products, and also serves as a place to collect and return goods bought online.

Campaigners have raised privacy concerns but one retail expert said the opening marked a "watershed moment".

"Having a physical presence will enable Amazon to address some of its weaknesses, like the mounting cost of deliveries and returns," said Natalie Berg, an analyst with NBK Retail.

But she said she did not believe it would pose a threat to the major chains in the near term.

"Supermarkets have had a few years now to prepare and test their own checkout-free shopping concepts."

Amazon's approach, however, promises a more "frictionless" experience than other retailers.

Visitors only have to place an item in a bag or otherwise carry it out to be charged by the store, which is located at the street entrance of a shopping centre in the borough of Ealing.

By contrast, retailers including Marks and Spencer, Tesco and Sainsbury's require consumers to scan items into a smartphone or other device.

The US firm is so confident of its tech that it says shoppers are not under any obligation to check all the items were accounted for.

"When you're finished, you're free to walk out," said Matt Birch, director of Amazon Fresh Stores and an ex-Sainsbury's executive. 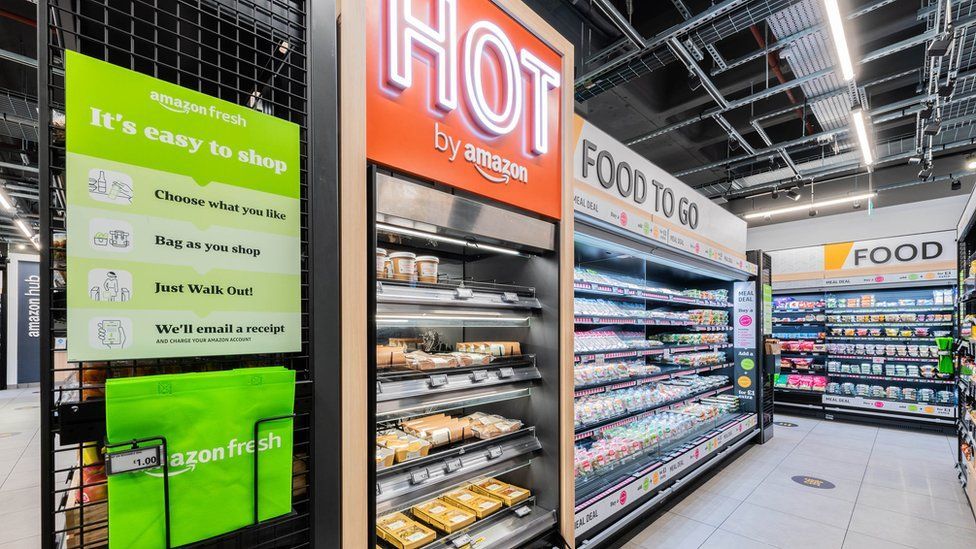 The technology involved was pioneered at the firm's similar Amazon Go stores in the States, which opened to the public in 2018.

However, recent advancements mean the system can now cope with customers selecting from different bouquets of flowers, magazines and greetings cards - it could not distinguish accurately enough between one choice and another before.

It involves the use of hundreds of cameras and depth-sensors, and software developed using deep-learning artificial-intelligence techniques.

However, it does not involve facial recognition. 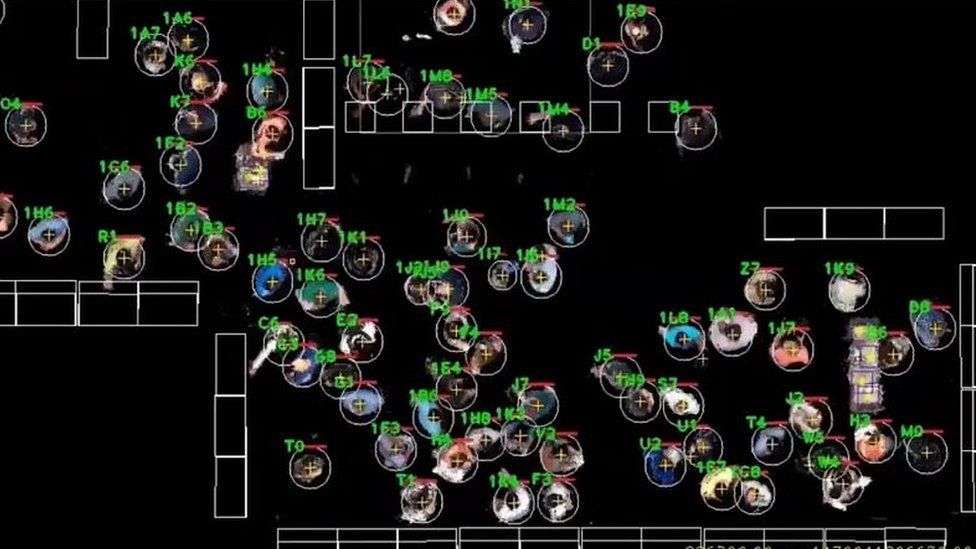 "Amazon's intense tracking of shoppers will create larger personal data footprints than any other retailer. Customers deserve to know how and by whom these records and analytics could be used."

The company has said it will only associate information collected in-store with a customer's Amazon account for up to 30 days, and has further details about how it uses the data on its privacy site.

Amazon said it had sourced many of its own-brand groceries - including milk and eggs - from UK suppliers itself.

In addition, it has launched an "Our Selection" sub-brand for "premium" products including desserts.

Other items come from Morrisons and Booths, supermarkets with whom its has pre-existing ties.

The store also contains a booth where orders can be delivered from its online store.

And customers can return goods by scanning a code without having to repackage or relabel the item.

"Hand the product over and we'll do the rest for you," said Mr Birch, adding he plans further stores on some of London other high streets as well as its city centre. 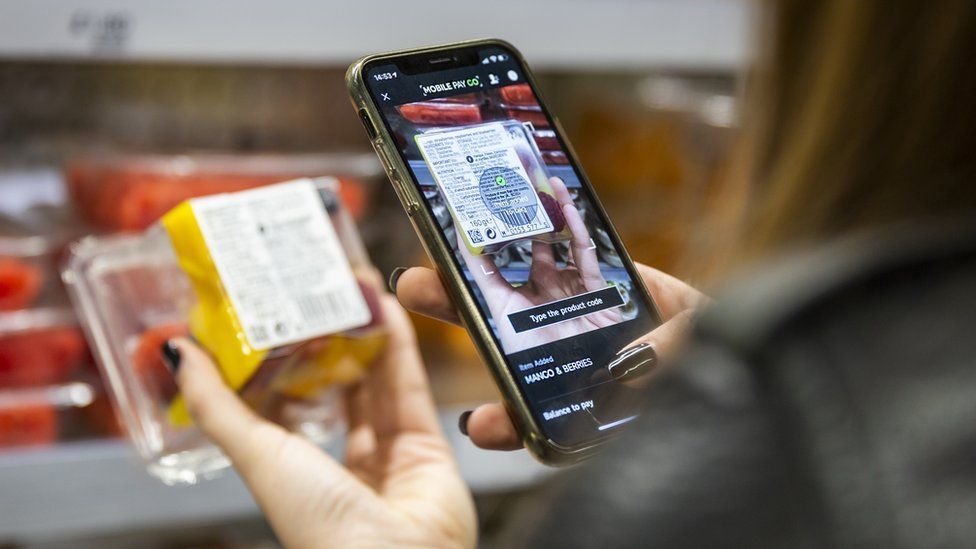 The Ealing store's customer area covers about 2,500 sq foot (232 sq m) in total, which is much smaller than a typical supermarket.

And there have been persistent rumours that it might try to expand further in the sector by buying one of the larger chains.

However, the company is also offering to sell its Just Walk Out technology as a service that can be installed in other companies' stores.

And ultimately it might decide there is more money to be made pitching this to the established supermarkets than challenging them head-on with bigger stores of its own.

Amazon has barely made a dent in the overall UK grocery market, but it's clearly got big ambitions for food.

It's been ramping up its online service, with free same-day deliveries for Prime members, putting pressure on rivals.

The traditional supermarkets have been improving their technology over the past few years and the pandemic has accelerated the changes.

Sainsbury's, for instance, has had a huge take-up in its SmartShop system where shoppers can pick up a handset and scan items as they go. 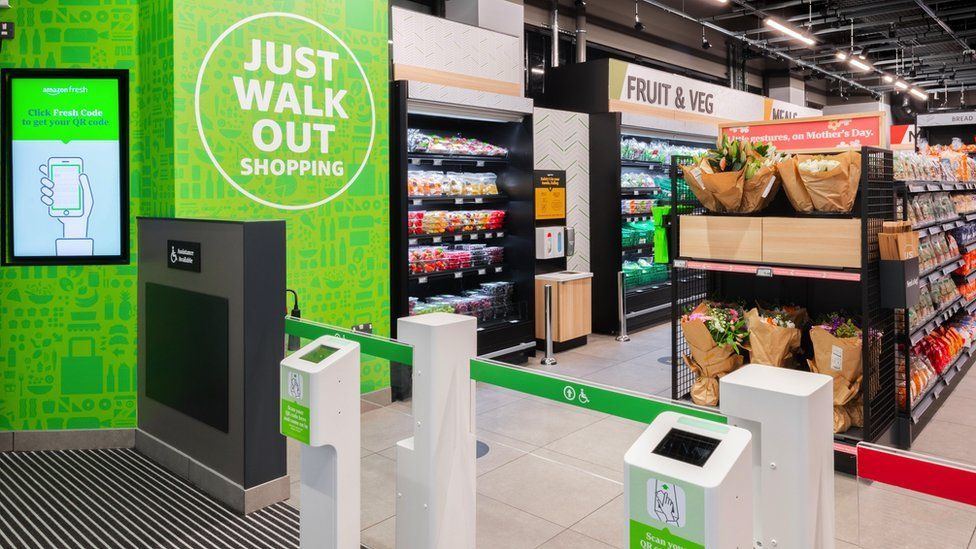 Moving into bricks and mortar is another milestone for Amazon.

Its new range of own-branded products is also eye-catching.

When it comes to convenience stores, being able to grab and go could prove very popular. But location is key.

And most of the best convenience-store sites in densely populated, urban districts have already been taken.

This launch won't pose a big, immediate, threat to the big established grocers but they know only too well that Amazon has the potential to be a hugely disruptive force and has already forced them to up their game.