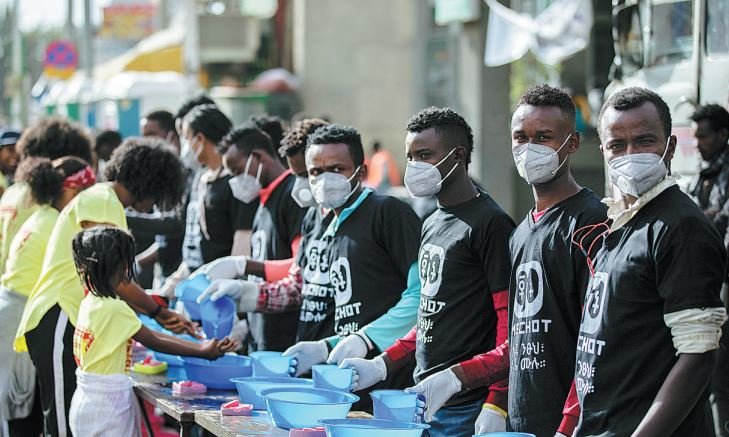 The number of African countries confirming coronavirus cases is increasing, which has prompted many nations on the continent to announce measures to control the virus's spread.
Ghana was the latest nation to ban entry to foreign visitors from countries hit hard by COVID-19, the BBC reported.

Earlier, South Africa declared a state of disaster, closing its borders to foreign nationals from countries such as China, Iran, Italy, Spain, the United Kingdom and the United States.

Kenya has also imposed sweeping travel restrictions, blocking entry to all travelers coming from countries with reported cases. On Sunday, the government confirmed two more coronavirus cases, bringing the total to three. Djibouti and Tanzania, which did not yet have confirmed cases, suspended international flights, the BBC said.

Morocco, which has 28 confirmed cases, including one death, has also suspended all international flights from its airports, while Libya has announced the closure of its airspace and land borders as a preventive measure starting on Monday.

In neighboring Algeria, which has 48 coronavirus cases, officials announced they would be suspending all flights to France as of Tuesday.

In Tunisia, which has 20 confirmed cases, Prime Minister Elyes Fakhfakh has ordered the closure of all borders and a ban on large gatherings, including congregation prayers in mosques, according to Reuters.

Mozambique's President Filipe Nyusi has suspended all gatherings of 300 people or more and all foreign travel by state officials－including his own visits scheduled for later this month.

The virus is now confirmed to be present in at least 26 nations across the continent, the BBC said.

Some scientists believe COVID-19 is circulating silently in other countries as well. "My concern is that we have this ticking time bomb," said Bruce Bassett, a data scientist at the University of Cape Town who has been tracking COVID-19 data since January, according to Science Magazine.

In the United States, the mayors of New York City and Los Angeles ordered on Sunday that restaurants, bars and cafes must only sell food on a take-out or delivery basis. New York City also closed the nation's largest public school system on Monday, sending more than 1.1 million children home.

The Associated Press, citing a US government official, reported that the first participant in a clinical trial for a vaccine to protect against the novel coronavirus was to receive an experimental dose on Monday.

The National Institutes of Health is funding the trial, which is taking place at the Kaiser Permanente Washington Health Research Institute in Seattle, AP reported.

In addition, Inovio Pharmaceuticals plans to begin tests of its vaccine candidate next month in volunteers at the University of Pennsylvania and at a testing center in Kansas City, Missouri, according to AP, with a similar study in China and South Korea to follow.

Public health officials have said it will take a year to 18 months to fully validate any potential vaccine.

US President Donald Trump has been pushing for swift action on a vaccine, saying in recent days that the work is "moving along very quickly" and he hopes to see a vaccine "relatively soon".

Meanwhile, nations in South and Central America ramped up measures such as border closures to contain the virus outbreak.

In the United Kingdom, a secret Public Health England briefing for senior officials of UK's National Health Service said that the coronavirus epidemic in the UK could last until next spring and lead to 7.9 million people being hospitalized, the Guardian reported.

The document, seen by the Guardian, is the first time senior health officials tackling the virus have admitted that they expect it to circulate for another 12 months and lead to a huge extra strain on an already overstretched NHS.

Britain's opposition parties accused Prime Minister Boris Johnson of being "complacent" and "well behind the curve" after a weekend of confusion about the government's plans to order all people over age 70 to quarantine themselves.

Criticism of the government's response to the coronavirus outbreak has pushed Johnson to agree to hold daily briefings beginning on Monday.

An online petition launched on Thursday has received more than 120,000 signatures by Sunday. The petition asks the UK to follow the containment procedures of countries that have been greatly affected by COVID-19, such as Italy.

Stock markets in Asia have fallen, even after central banks around the world announced a coordinated effort to ease the effects of the coronavirus.

The US Federal Reserve cut interest rates on Sunday to a range of 0.0 to 0.25 percent and promised to boost its bond holdings by at least $700 billion.

The eurozone, the UK, Japan, Canada and Switzerland also have taken action.

The head of the European Commission, Ursula von der Leyen, described the pandemic as "a major shock" to Europe's economies and vowed to make available 37 billion euros ($41 billion) to help mitigate the damage.

Eurozone finance ministers were to meet on Monday to see what else could be done.
#Donald Trump  #COVID-19  #vaccine  #Covid  #Coronavirus  #Boris Johnson
Add Comment