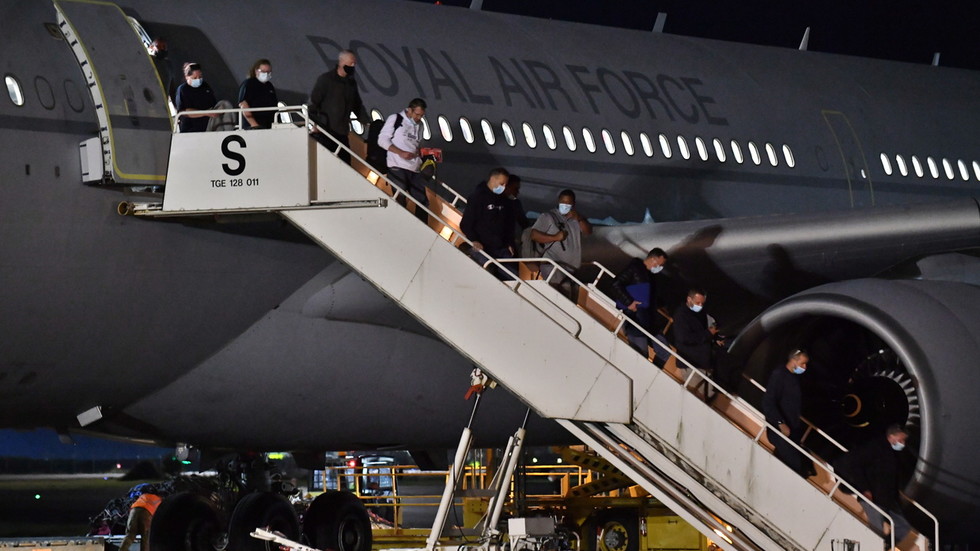 Afghans who worked with British govt will get PERMANENT residence in UK, but hundreds still left behind

Afghans who worked for British troops will be entitled to “indefinite” leave to stay and a right to apply for UK citizenship in the future, London has said, as hundreds of those eligible for evacuation remain in Afghanistan.
Dubbed ‘Operation Warm Welcome,’ the British government unveiled on Wednesday what it called a “significant cross-government effort,” saying Afghans arriving in the UK will receive the “vital support” needed to rebuild their lives.

All Afghans who “worked closely with the British military and UK Government in Afghanistan” would, immediately upon their arrival, be granted an unrestricted right to stay. Those who have already relocated to Britain under the Afghanistan Relocations and Assistance Policy (ARAP) will be able to swap their temporary leaves for permanent ones, a government statement said.

The government also vowed to spend £12 million ($16.55 million) to “prioritize” additional school places and assistance for arriving Afghan children. Funding for 300 undergraduate and postgraduate scholarships for Afghans at UK universities, as well as English courses for adults, will also be provided.

The program includes access to healthcare and housing assistance. A total of £200 million ($275.8 million) has been allocated to meet the costs of the first year of the Afghanistan Citizens’ Resettlement Scheme, the government said.

At least 8,000 Afghans eligible for receiving assistance under the ARAP programme have been evacuated by the UK since August 13, according to British media. They were among the 15,000 evacuees flown out by British aircraft over that period.

Additionally, the UK also said it would take in 5,000 Afghan refugees this year. The move will be a part of another programme – the Afghan Citizens' Resettlement Scheme – that aims at accepting 20,000 over the course of five years. This programme is focused on women, children and various Afghan minorities.

UK Prime Minister Boris Johnson said London owes “an immense debt” to those who worked with British Armed Forces and that he was “determined” to support them and their families. Home Secretary Priti Patel added that the goal is to make sure Afghans “have certainty and stability to be able to thrive in the UK.”

It appears, however, that not everyone eligible for the UK support will be able to benefit from London’s generosity immediately. Hundreds of Afghans who worked for the UK on the ground still remain in Afghanistan, after military evacuations came to an end on Monday night, British media have reported.

Between 150 and 250 people “eligible for evacuation” – plus their families – remain there, UK Defense Secretary Ben Wallace told MPs, according to the BBC. London is engaged in talks with the Taliban to ensure their safe passage out of the country, Downing Street has confirmed.

Johnson’s special representative for the Afghan transition, Sir Simon Gass, has travelled to Doha to meet senior Taliban officials and “underline the importance” of safe passage both for British nationals and Afghans who worked with the UK over the last 20 years, a spokesperson told the media.

Earlier, a former patrolling translator for British security forces at the UK's Kabul Embassy told RT he was virtually abandoned by London amid the chaotic evacuation. He was eligible for evacuation, but failed to reach the Kabul airport in time without outside help and was eventually forced to go into hiding.

It has also been reported that some 125 Afghan guards of the British embassy in Kabul were declared ineligible for protection by the UK government. The guards, who were turned away together with a dozen other Afghan embassy staffers, said their jobs were terminated through an informal notice only – right after they helped British diplomats flee Afghanistan.

The UK's Afghan Relocations and Assistance Policy (ARAP) programme also originally rejected applications from former local employees who had been dismissed from service. In the face of repeated criticism, the scheme was eventually revised to exclude only those Afghans dismissed for "serious" or criminal offences.
#Boris Johnson  #Afghanistan  #Priti Patel  #Johnson
Add Comment