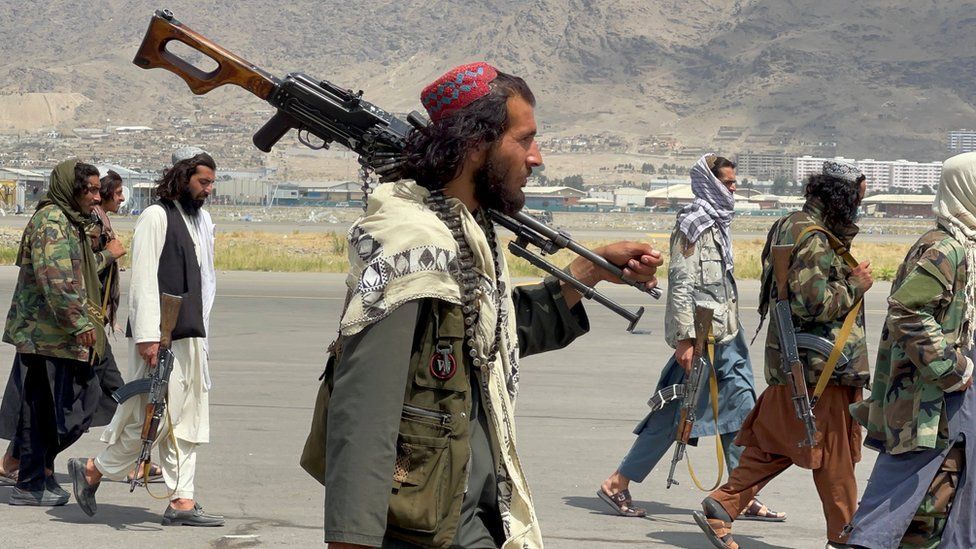 Afghanistan: UK and Taliban in talks over further evacuations

The UK is in talks with the Taliban to secure safe passage out of Afghanistan for a number of British nationals and Afghans who remain there.

The defence secretary is understood to have told MPs that between 150-250 people eligible for relocation - plus their families - remain in the country.

It comes after a Taliban pledge to allow further departures.

Commenting on the UK-Taliban negotiations, a No 10 spokesman said: "The prime minister's special representative for Afghan transition, Simon Gass, has travelled to Doha and is meeting with senior Taliban representatives to underline the importance of safe passage out of Afghanistan for British nationals, and those Afghans who have worked with us over the past 20 years."

On Tuesday, Foreign Secretary Dominic Raab said more than 17,000 people had been evacuated by the UK from Afghanistan so far, including over 5,000 UK nationals.
He also said the UK needed to face the changing situation in Afghanistan and work with other nations to exercise a "moderating influence" on the Taliban.

"The challenge now is to face the new reality, as difficult as it is, and to come up with a new plan that reflects it," Mr Raab told the BBC.

The Taliban have declared victory in Afghanistan following the withdrawal of US troops, with fighters streaming into Kabul airport on Tuesday. British troops left the country over the weekend.

The Taliban have promised those with authorisation will be allowed to leave the country, and US Secretary of State Anthony Blinken pledged to "hold the Taliban to their commitment".

But Dame Barbara Woodward, the UK's ambassador to the UN, said the militants would be judged "on the basis of their actions on the ground, not their words".

In addition to the talks with the Taliban, the UK government said it was sending 15 "crisis response specialists" to Pakistan, Uzbekistan and Tajikistan to assist British diplomats in their work to allow people to reach the UK.

They are expected to arrive within the next 48 hours, with the focus on helping UK nationals, interpreters and other Afghans who were employed by the UK, and those Afghans judged most at risk.

Speaking to the BBC earlier, a former English language teacher who is stranded in Kabul said he regretted working with the UK mission because he now fears for his life.

"I regret working with the English. I regret helping people learn English. Why did I work for people who left me and fled and left me alone here?" he asked.

The teacher, who the BBC is not naming, said he worked for the UK for eight or nine years, including for the British Council, and was now a target for the Taliban.

"They are looking for me because I've got pictures in billboards advertised for classes," he said.

He said he tried to escape Afghanistan shortly before the militants took control but received "no reply" to his application for resettlement, adding that he had been unable to sleep ever since.

Asked what he thought would happen to him if he could not leave and the Taliban found him, he added: "My fate will be the same, like others, like the people who work in military, in the media... they will kill me too."