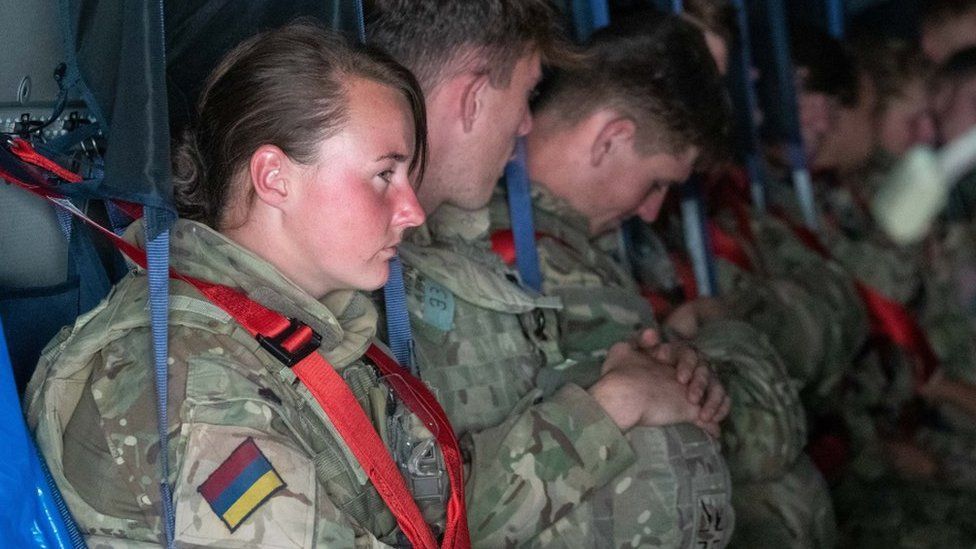 The departure of the RAF flight brings to an end the UK's 20-year military involvement in Afghanistan.

More than 15,000 people have been evacuated by the UK since 14 August.

Prime Minister Boris Johnson said the moment was a chance to reflect on the achievements of recent weeks - and the last two decades, such as girls' education and weakening al-Qaeda.

In a letter to the armed forces community, Mr Johnson acknowledged the fall of Kabul to the Taliban will have been hard for them to watch.

He added it would be "an especially difficult time for the friends and loved ones of the 457 service personnel who laid down their lives" during the war.

The prime minister said the UK's involvement in Afghanistan "kept al-Qaeda from our door for two decades and we are all safer as a result".

"Whether you are still serving or a veteran, a loved-one, a relation or a friend, you all played your part and you should feel immense pride," he said.

No 10 said the number of people evacuated included around 2,200 children, with the youngest just one-day old.

Downing Street said the evacuation effort saw the Royal Air Force record its single biggest capacity flight ever when 436 people were carried on a C-17 aircraft.

Defence Secretary Ben Wallace addressed returning troops, saying: "Every one of you [has] displayed the highest levels of professionalism and bravery. You have helped thousands to get to a better future and safety."

The mass airlift known as Operation Pitting has been under way since the Taliban took control of the capital, with a deadline of 31 August in place for foreign troops to leave the country.

The US has been running the airport in Afghanistan's capital, where a suicide bomb attack on Thursday may have killed as many as 170 people - including two UK citizens and the child of a British national.

More than 1,000 UK troops were in Kabul helping to process departures at the airport at the height of the operation.

The British ambassador to Afghanistan, Sir Laurie Bristow, said on Saturday it was "time to close this phase of the operation now". He added: "But we haven't forgotten the people who still need to leave. We'll continue to do everything we can to help them."

The UK's embassy in Kabul later said its operations were "suspended". "We continue to provide only limited consular assistance remotely," it added. The government said the embassy will relocate to Qatar.

What happens to Afghan refugees coming to the UK?

*  Arrivals on official flights enter a 10-day Covid quarantine in a hotel
*  Government officials and local authorities are trying to find them permanent homes
*  A shortage of suitable accommodation means many will be placed in hotels
*  Some will get refugee status and can live in the UK permanently
*  Others will get a five-year visa to live and work in the UK - and can then apply for permanent residence
*  Afghans arriving independently will enter the normal system for asylum claims - which has a backlog of 70,000 people
*  These people cannot settle, or work, while their claims are considered

A new effort to resettle former Afghan staff and their families in the UK has been announced by the government.

It will be modelled on the Syrian resettlement programme that saw 20,000 refugees come to the UK between 2014 and 2020. A similar number from Afghanistan are expected over the coming years.

Support will include help with integration and dealing with trauma, free English language courses, and assistance with health, education, accommodation and employment.

It follows the announcement of a £5m fund for local councils to provide housing support and rapid mental health treatment for those arriving.