The UK will continue its operation to evacuate people from Afghanistan despite an attack at the capital's airport, says Boris Johnson.

Speaking after an emergency meeting in No 10, he pledged the UK "will keep going to the last moment."

The PM called the blasts - reportedly carried out by suicide bombers - "barbaric" and "despicable".

Two explosions hit Kabul airport on Thursday, killing more than 60 people - among them 13 US military personnel.

At least 140 people were also wounded in the attack, which the so-called Islamic State group has claimed it was behind.

The Ministry of Defence (MoD) said there had been "no reported UK military or UK government casualties".

Speaking on Thursday, President Joe Biden vowed to carry on with the evacuation. He said the US would "not forgive" and "not forget" the attack, telling the perpetrators: "We will hunt you down and make you pay."

Mr Johnson said the UK airlift would continue "flat out" but that it was nearing its conclusion.

Figures released by the MoD on Thursday night showed 13,146 individuals had been flown out so far.

In the aftermath of the suicide bombings at the airport, the pace of the emergency airlift from Afghanistan has slowed but it has not halted.

The BBC understands that people who'd already been allowed inside the airport perimeter have continued to be processed, to be boarded on to departing planes.

But sources said the numbers arriving to be processed had decreased considerably as the Taliban were turning back many Afghans, particularly those who did not hold foreign passports or visas.

Boris Johnson said the UK was "coming towards the very end" of its operation and suggested "the overwhelming majority of those eligible" had now been flown out.

But there remain many clamouring not to be left behind, including interpreters who had worked for the British military, security guards from the UK embassy, Afghan soldiers trained by British forces, those who worked with international organisations and academics.

Thursday's twin blasts took place outside the Abbey Gate - where US and British forces have been stationed to help with evacuations - and at a nearby hotel, following warnings there could be terrorist incidents in the area.

After chairing an emergency Cobra meeting on the situation, the PM told reporters: "I want to stress that this threat of a terrorist attack is one of the constraints that we've been operating under... in the big extraction that's been going on, and we've been ready for it, we've been prepared for it.

"And I want to stress that we're going to continue with that operation - and we're now coming towards the end of it, to the very end of it, in any event.

"But, clearly, what this attack shows is the importance of continuing that work in as fast and as efficient manner as possible in the hours that remain to us, and that's what we're going to do." 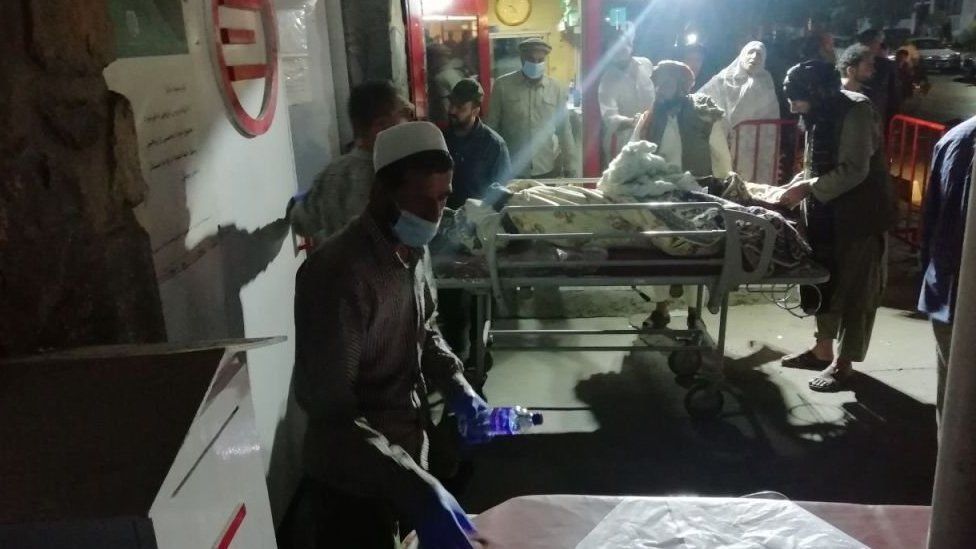 Mr Johnson said the Foreign Office, Home Office and Border Force teams were "going to work flat out" to get people through "as fast as they can".

He added: "We're going to keep going up until the last moment."

The US has set a deadline of 31 August for the withdrawal of its troops, with President Biden rejecting calls from Mr Johnson and other allies for an extension.

"The UK and US remain resolute in our mission to get as many people out as possible. It is testament to the remarkable courage of our personnel that they continue to do so while under fire," he said.

A statement from the MoD said: "Our primary concern remains the safety of our personnel, British citizens and the citizens of Afghanistan. We are in close contact with our US and other NATO allies at an operational level on the immediate response to this incident."

Labour leader Sir Keir Starmer called the attack "devastating", and said his thoughts were with "all those killed and wounded, serving personnel supporting the evacuations and all those desperately trying to leave".

He added: "The bravery of the troops at the airport will always outweigh the cowardice of those who wish to harm us."

Kabul airport is currently being defended and run by the US, which has 5,800 troops on the ground - with the help of more than 1,000 UK troops.

Armed Forces minister James Heappey declined to give a date for the last UK evacuation flights, but said it was likely that UK and other foreign troops would have to leave before the last American airlifts.

However, during a visit to the British military's Permanent Joint Headquarters in north London, where he met troops involved in evacuation efforts, Mr Johnson insisted the US deadline would not mark the end of the UK's efforts to help people wishing to flee the Taliban-controlled country.

He added that the current airlifts were just the "first phase".

"Even beyond the US deadline of 31 of this month, we hope to be able to continue to say to people, well you can come out," he said. 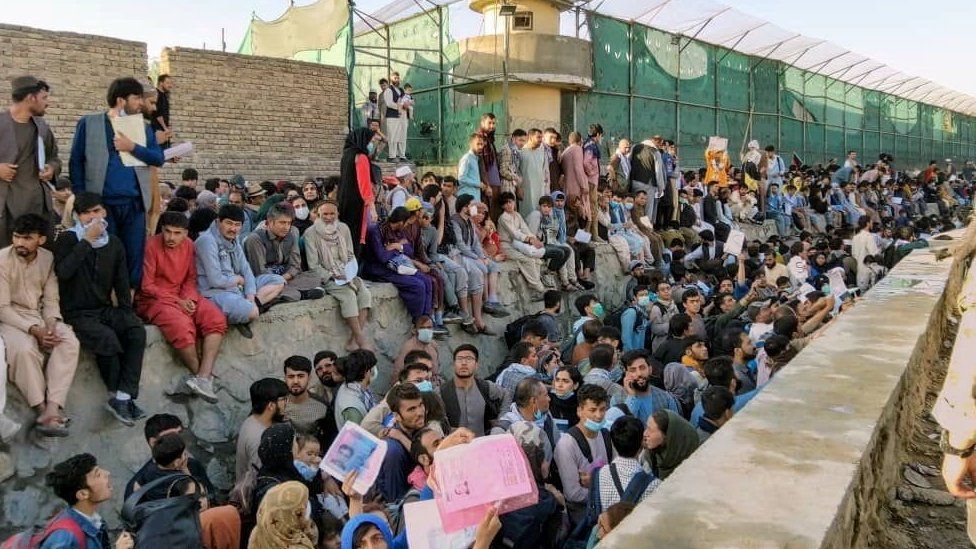 Crowds of people are waiting outside Kabul airport