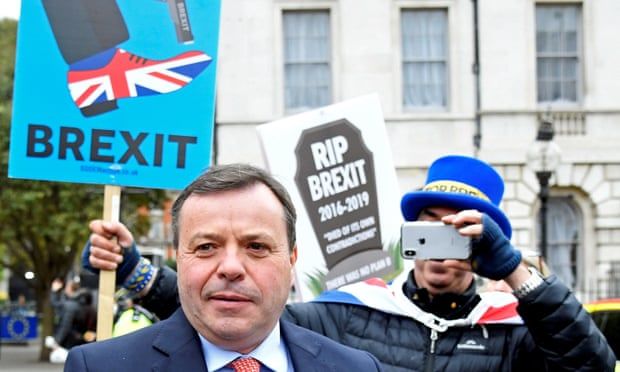 The Brexit campaign group Leave.EU has gone into liquidation with its controversial co-founder Arron Banks appearing to write off a loan worth more than £7m.

Documents submitted to Companies House also reveal that the anti-EU lobbying group, which was fronted by Nigel Farage during the 2016 EU referendum campaign, has failed to pay tens of thousands in fines owed to the Information Commissioner’s Office (ICO) for breaches of data law.

Yet the decision by Banks to apparently write off £7,051,987 in loans to Leave.EU will attract most controversy after years of speculation over the source of his funding to the EU referendum campaign.

In 2018 a referral was made by the Electoral Commission to the National Crime Agency claiming Banks was not the “true source” of the loan and that the money had come “from impermissible sources”.

The NCA found no evidence of criminality, concluding that Banks took a loan from an Isle of Man company he owned, which he was legally entitled to do.

Banks had denied any wrongdoing and dismissed claims surrounding his funding as “ludicrous”.

Critics yesterday said the apparent writing off of £7m might be seen by Banks as a reasonable price for the disruption caused by Brexit. 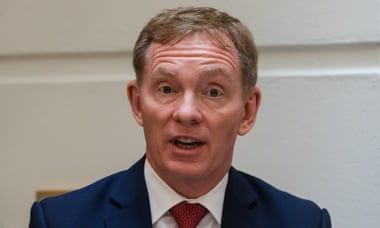 Chris Bryant, chair of the House of Commons standards committee, criticised Arron Banks for the ‘real damage’ caused by Brexit.

Chris Bryant, chair of the House of Commons standards committee, said: “I wonder when we’ll wake up to the real damage that’s been done [by Banks] to this country. The £7m that he’s out of pocket is frankly the least of it.”

Another Labour MP, Ben Bradshaw, said: “£7m is a very small fine for the long-term damage that Banks has done to Britain.”

Bradshaw, who previously called on the government to investigate the possible role played by “dark money” in the EU referendum more widely, added: “The whole sorry saga illustrates the importance of robust independent regulation of political donations and campaign funding at a time when the Tory government is hellbent on emasculating the Electoral Commission.”

Last month the government published details of an “election power grab” that many said would undermine the commission’s independence.

Banks was the biggest backer of the Brexit campaign. In spring 2016, he gave £6m in loans to Leave.EU – a huge amount for a British political campaign – that reports have indicated were due to be repaid by the end of 2017.

The Companies House documents confirm Banks, a former Ukip donor, never called in such large debts, instead appearing to choose to write them off in April this year, by which point the sum had risen above £7m due to a change in borrowing and interest rates.

The documents also show that Leave.EU has not paid £52,000 in fines owed to the ICO.

After an investigation into the misuse of personal data by political campaigns, Leave.EU was fined £45,000 for sending more than a million emails to its subscribers that contained marketing for an insurance company owned by Banks.

It was also fined £15,000 for unlawfully using Eldon Insurance customers’ details to send out almost 300,000 political marketing messages, before the referendum.

Leave.EU said at the time that it was a “politically motivated attack” because of its involvement in Brexit.

On Saturday a spokesperson for the ICO said: “We will continue to monitor the progress of the insolvency and support the liquidator with their inquiries if required.”

In 2018, when it was announced that the NCA was investigating allegations that he hid the source of donations used to fund Leave.EU, Banks said: “There is no evidence of any wrongdoing from the companies I own. I am a UK taxpayer and I have never received any foreign donations.”

The leading Brexit campaigner added that he was “confident that a full and frank investigation will finally put an end to the ludicrous allegations levelled against me and my colleagues”.

Banks has been approached for comment over the liquidation of Leave.EU and whether he has written off the £7m.

According to a submission to Companies House, Leave.EU had available assets worth £4,233 at the time of liquidation.