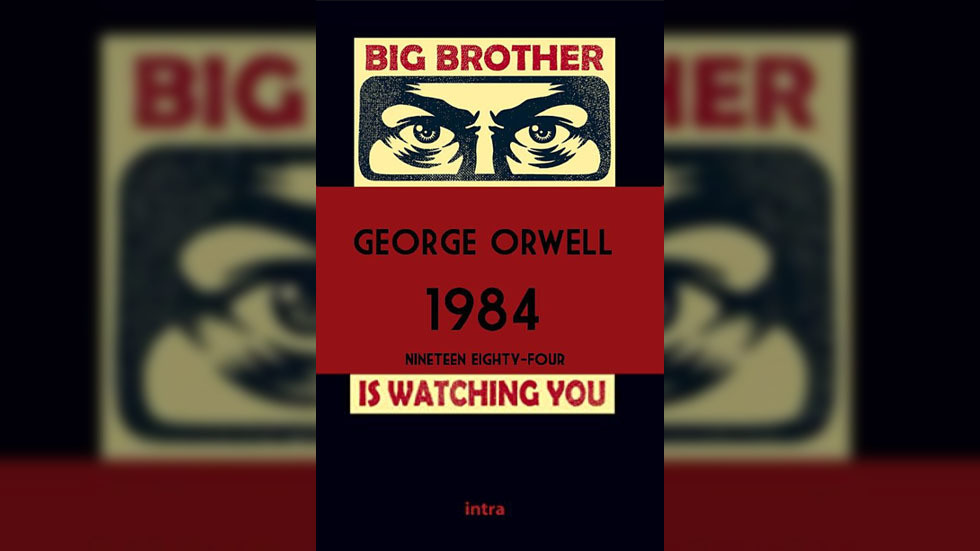 The University of Northampton, an institution which appears to have suffered an irony bypass, slapped a trigger warning on ‘1984’ because it contains “explicit material,” which some students may find “offensive and upsetting”.

Thus, another great work of English literature is branded ‘bad’, or ‘doubleplus-ungood’ if you prefer.

It seems the Thought Police are alive and well in Northampton. I mean, God forbid we wake the woke by letting them read George Orwell’s ‘1984’ without a warning that it may be as hazardous to their mental health as cigarettes are to their lungs. Perhaps “I read Orwell, but I didn’t inhale” will be the excuse du jour of future politicians?

The woke must be warned to steel themselves with icy resolve if they are to turn the pages of ‘1984’, lest they awaken and see exactly where their dreams of ‘social justice’ are taking us. Reading ‘1984’ could cause the snowflakes to have an embarrassing meltdown in class as they recognize themselves as the villains (though this would require a level of self-awareness hitherto unseen on their part). They would, then, need to retreat to their safety puddles to comfort each other with assurances that their work as the social-media posse enforcing the state’s Groupthink policies is for the betterment and unification of a world without discordant ideas.

I have my doubts over whether ‘1984’ could even be published today because it places its crosshairs on the very censorship that governs the educational, journalistic and artistic realms of our time. Ironically, on the other hand, perhaps it would simply read like a boring tale of the world as it is, so readers would only wonder what was bothering Winston Smith so much about life on Air Strip One.

But if it did get published, and actually started gaining attention and waking people up, it would, with equal irony, likely suffer the fate of the books in Ray Bradbury’s ‘Fahrenheit 451’. It is, in internet terms, already being flamed by what the university has to say about it.

Appropriately, the literature course that provides this warning is part of a module labeled “Identity Under Construction,” as no one is certain of their identity today, thanks to schools like this pedaling gender-fluid, trans-sexual, non-binary nonsense to woke students. This is why they must take college courses to figure out what children previously understood in pre-school. There are so many gender choices now, since schools began indoctrinating students into thinking they cannot just look down at their groins to know their gender. The question, with which maybe one in a thousand unfortunate, confused souls once struggled, has now become a universal struggle.

Some have tried to blame this kind of insane wokeness on “Foreign Powers” (they mean Russia).

One could be forgiven for thinking Mr. Graham has a point because, as this next fellow points out (if I may still venture this is a “fellow” without checking preferred pronouns), the strategy is showing great returns already if it were a nefarious plot:

But, in the reality, the truth is much closer to this writer’s theory:

“The America government and establishment is now culturally to the left of most of its great power rivals, such as Russia, China, and Iran, not to mention friends like India, Israel, Poland and even, perhaps, France. The U.S. government sponsoring Woke-adjacent consciousness-raising on their soil is a running annoyance, much less the power of the U.S. media…. In general, why [should Russia or China] bother? The U.S. is self-destructing for free, so if you are Putin or Xi, it’s best just to sit back and watch the show.”

As Vladimir Putin, himself, has said, Russia has been there, done that, and doesn’t need to do it again, while apparently the West needs to learn by its own hard path:

“The advocates of so-called 'social progress' believe they are introducing humanity to some kind of a new and better consciousness. Godspeed, hoist the flags, as we say, go right ahead. The only thing that I want to say now is that their prescriptions are not new at all. It may come as a surprise to some people, but Russia has been there already. After the 1917 revolution, the Bolsheviks, relying on the dogmas of Marx and Engels, also said that they would change existing ways and customs, and not just political and economic ones, but the very notion of human morality and the foundations of a healthy society. The destruction of age-old values, religion, and relations between people, up to and including the total rejection of family (we had that, too), encouragement to inform on loved ones – all this was proclaimed progress and, by the way, was widely supported around the world back then and was quite fashionable, same as today. By the way, the Bolsheviks were absolutely intolerant of opinions other than theirs.”

Indeed, it doesn’t take “the Russians” to make something like this happen in America or in the UK when it is mandated from within by authorities in government, in business and the arts:

“The 'explosion of woke,' as one longtime producer put it, didn't come out of nowhere. Hollywood had always pushed boundaries—from the 1947 'Gentleman's Agreement,' which confronted antisemitism, to 'Guess Who's Coming to Dinner' (1967), which tackled interracial marriage, to 'All in the Family' (1971-1979), which grappled with race and women's liberation.”

Now, even All in the Family has been stashed out of sight because Archie Bunker would have been a Trump voter, and we can’t have that on mainstream television!

Since the Academy of Motion Pictures Arts & Sciences launched its Representation and Inclusion Standards Entry platform (or RAISE), all producers hoping for a Best Picture award must provide detailed information about every person involved in the production showing they meet the following criteria:

Of course, people may get sick of having this social agenda shouted into their ears and flashed into their eyes every time they sit down for entertainment. In which case, movie theaters may continue to wane into irrelevance and so might television that is produced by the BIPOC-LGBTQ corporations. (Because we just cannot have enough letters for our underrepresented peoples groups. Could we just call them all “UPG”s for short?)

As one RT writer said of the Academy’s new plot, we may soon reach “the near irrelevance of an entire industry (almost an entire art form) from self-destructive guilt.”

Because you dare not fall behind on wokeness, or the thought police will arrest you, even television producers are adhering to the Academy’s standards. The LA Times reports that “CBS mandated that writers' rooms be at least 40 percent black, indigenous and people of color (or BIPOC) for the 2021-2022 broadcast season and 50 percent for the 2022-2023 season.”

Oh, good, Safe Zones within CBS to create a woke-rich source of material for trite sit-coms. Of course, I need not apply because I call myself a WHAM! (White Heterosexual American Male!) None of those letters appear in the approved acronyms of Newspeak.

The changes are so intense and pervasive among the gatekeepers of culture and knowledge that Jordan Peterson resigned his position as tenured university professor at the University of Toronto because he said he felt like he was essentially defrauding his mostly white heterosexual male graduate students (they were Canadian, so they can’t call themselves WHAMs!) just by teaching them because they didn’t really have a shot at getting employment or of gaining research positions in their own university. He describes a university that sounds more like the Ministry of Truth:

“Diversity, Inclusivity and Equity mandates (my preferred acronym: DIE)…have been imposed universally in academia, despite the fact that university hiring committees had already done everything reasonable for all the years of my career… to ensure…no qualified ‘minority’ candidates were ever overlooked…. How can I accept prospective researchers and train them in good conscience knowing their employment prospects to be minimal?”

“Second…there simply is not enough qualified BIPOC people in the pipeline to meet diversity targets quickly enough…. This means we’re out to produce a generation of researchers utterly unqualified for the job…. That, combined with the death of objective testing, has compromised the universities so badly that it can hardly be overstated.”

So, the thought police of the West’s major universities and major media producers will make certain you are rigorously tested not for your skills and credits, especially in racist math, but for your adherence to woke orthodoxy and how well you fit in with the protected groups of the day. This line of thinking will be reinforced throughout your education and later in corporate communication as the language of Newspeak. (Time to read ‘1984’ if you don’t recognize that term because you’ll need to.)

I’ll leave you with this quote from the man himself: “Power is in tearing human minds to pieces and putting them together again in new shapes of your own choosing.”