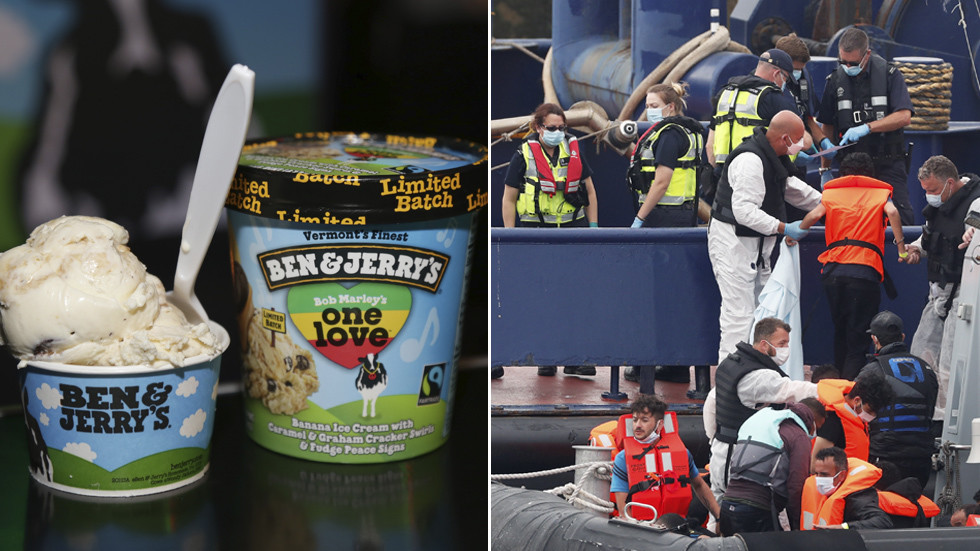 Ben & Jerry’s has been accused of dishing out a large serving of hypocrisy, after lecturing the UK government about showing an alleged lack of empathy for migrants picked up while crossing the English Channel.

The American ice cream brand went after Home Secretary Priti Patel, who recently vowed to crackdown on the surge of illegal migrant crossings from France. Responding to growing anger over the more than 4,000 migrant arrivals so far this year, Patel said she would aim to make illegal Channel crossings “unviable.”

“Hey, @PritiPatel, we think the real crisis is our lack of humanity for people fleeing war, climate change and torture,” the company’s UK subsidiary tweeted. It followed up with a series of posts arguing that the country should create “safe and legal routes” for anyone who wishes to enter.

“Let’s remember we’re all human and have the same rights to life regardless of the country we happen to have been born in… PEOPLE CANNOT BE ILLEGAL,” it insisted.

The sanctimonious tweets received a tongue-lashing on social media, with politicians and journalists alike urging Ben & Jerry’s to stick to what it knows best, namely, ice cream.

“Can I have a large scoop of statistically inaccurate virtue signalling with my grossly overpriced ice cream, please?”mocked Conservative MP James Cleverly.

The Home Office was similarly unimpressed, according to the BBC. A source inside the ministry retorted that the government wasn’t particularly worried about “upsetting the social media team for a brand of overpriced junk food.”

OOOF! Home Office source: “Priti is working day&night to bring an end to these small boat crossings, which are facilitated by international criminal gangs&are of serious concern. If that means upsetting the social media team for a brand of overpriced junk food then so be it.” https://t.co/QIrfXOjZ5w

Many others argued that Ben & Jerry’s isn’t in a position to grill other institutions about alleged human rights violations. Journalist James Ball noted that the company’s parent company, Unilever, was the target of a complaint filed by Kenyan tea plantation workers, who alleged the corporation had failed to protect them from ethnic violence.

Judging from the responses, the self-righteous tweets backfired spectacularly. Telegraph columnist and former MP Rob Wilson noted that the Twitter stunt accomplished little aside from putting Unilever in “the firing line for underpaying taxes and re-examining its poor record on migrant workers.”

So what have the ice cream folk @benandjerrysUK achieved by getting political? It has put patent company @UnileverUKI in the firing line for underpaying taxes and re-examining its poor record on migrant workers etc. Someone there has the Gerald Ratner business manual.

However, not everyone was ready to condemn Ben & Jerry’s. One commenter said she’d never turn her back on the company because it makes “great vegan ice cream.” Others argued Ben & Jerry’s was simply exercising “free speech” and there was no reason for “right-wingers” to be upset about the company’s political posturing.