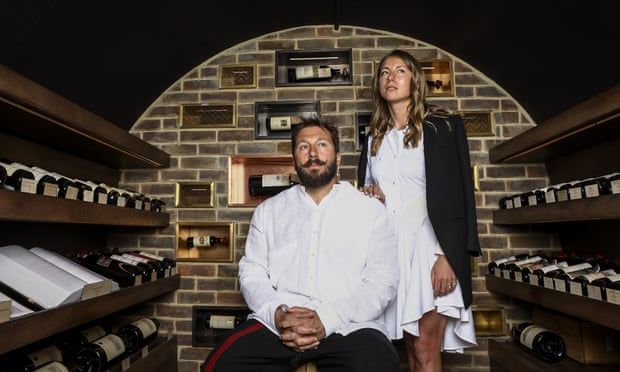 ‘A dirty game’: Russians in UK rail at calls to seize oligarchs’ assets

Yevgeny Chichvarkin, the multimillionaire owner of the Michelin-starred Mayfair restaurant Hide, was walking through Belgravia on Monday when he came across the mansion of another super-rich Russian that had been occupied by protesters demonstrating against the invasion of Ukraine.

Although Chichvarkin, 47, is a longtime vocal critic of Vladimir Putin, he was alarmed by the squatters’ occupation of the £50m property owned by the oligarch Oleg Deripaska, describing their action as “a dirty game”.

“To stop the war it will be helpful to send Javelins [a weapon system] and anti-tank missiles to Ukraine,” he said, adding that he supported a Nato no-fly zone over the country. “But to seize expensive ships or expensive houses, it’s a play for the next election by leftwing people. It’s a dirty, dirty game.”

Chichvarkin, who also owns the luxury wine store Hedonism, is one of a group of high-profile exiled Russian public figures, including the oligarch Mikhail Khodorkovsky, who last month founded an anti-war committee to hold Putin and other regime officials accountable for violations of international law.

He and his partner, Tatiana Fokina, have attended anti-war protests in London with their six-year-old daughter, Alice, and earlier this month he delivered a lorryload of medicine to Ukrainian refugees in Warsaw. He described the pain he felt for Ukraine and Russia as “like two bullets in one heart”.

But like several Russians I spoke to in Mayfair, Chichvarkin, who fled Moscow in 2008 claiming he was forced out by demands from corrupt officials to pay bribes, is perturbed by calls from some UK politicians, including government ministers, to seize oligarchs’ assets, including mansions, yachts and private jets.

“There is a lot of alarmism in the press,” he said. “People with a low education and leftwing [views] who feel jealous to see the cars, beautiful houses and yachts. [It’s] so easy to play with their feelings about equality.”

Chichvarkin said he supported seizing corrupt assets but only if it was done with respect for due process. “It has to be the decision of the high court. That’s why we respect [the] United Kingdom.”

It was a sentiment echoed by Fokina, 34, in the dimly lit basement bar of the Hide on the night the police arrested the Belgravia squatters. “There’s lots of tainted Russian money [in London], but, also, there are so many political Russian refugees with money. I know so many very wealthy people who are now donating incredible amounts to Ukraine, and their accounts are being frozen.”

Fokina fears that indiscriminate sanctions and cultural boycotts of Russian music play into the hands of Putin’s propagandists. “Every case of Russophobia in Europe, they are blowing up to a huge scale, saying no one will be glad to see you there,” she said.

Although she has not been personally targeted, Fokina said some friends had been affected. “My friend’s five-year-old came back home and said: ‘Mummy, why are you killing people?’”

Fokina, whose mother has fled to London because of the war, described her mixture of shock, despair and guilt in reaction to the invasion. “I can’t bear to look into the eyes of my Ukrainian friends because I feel profoundly ashamed, [even though] I’ve been in opposition to the current regime from a very young age. I think the best way someone’s put it is that all of a sudden you feel both like the Nazis and the Jews.”

Natasha (not her real name), a Jewish Russian emigrant who has lived in London for 30 years, said she was shocked by the number of Russians back home who support Putin. The 50-year-old blamed this on state propaganda that portrays the conflict as a “saintly war against Nazis”. “It’s just been surreal,” she said. “It’s like some kind of parallel reality.”

Natasha, who works as a concierge manager for the super-rich, said sanctions had affected the children of her wealthy Russian clients who were studying at British boarding schools.

She acts as a guardian for three teenage boys, one of whom has asked to borrow money from her because the bank card given to him by his parents for his pocket money had been cut off. “These kids now they’re basically stranded,” she said. “It’s not fair.”

Pytor (not his real name), a trader and investment banker who also joined the table at the Hide bar, said he was angry that sanctions were affecting people who had nothing to do with the war.

The 46-year-old, who moved to London three years ago, argued that the west had breached the balance of power with Russia through the expansion of Nato and the European Union.

Although he said there was no justification for the invasion, Pytor said he had lost faith in the western media because he saw its coverage of the conflict as too biased. “I’ve been very disappointed by the level of political propaganda and fierce hatred against Russia.”

Victor Balagadde, a former editorial director for the Russian newspaper Kommersant, said he thought Pytor’s position was closest to that of the average Russian living in London.

“You could see that through the social networks when the war started,” said Balagadde, 50, who lived in Kharkiv for 12 years and opposes the war. “They were more concerned not about people dying in Ukraine but about the sanctions which were imposed on Russia. It has been really hard to hear that.”

Chichvarkin said some wealthy Russians in one of his WhatsApp groups were hostile towards discussion of the invasion. “They said: come on guys, it’s not a war chat, let’s be very polite and calm down. And another guy said: yeah, look at the banks, shut up with your war. And I left this group and I said: ‘Fuck all of you guys with no politics. Politics will come to you soon.’”