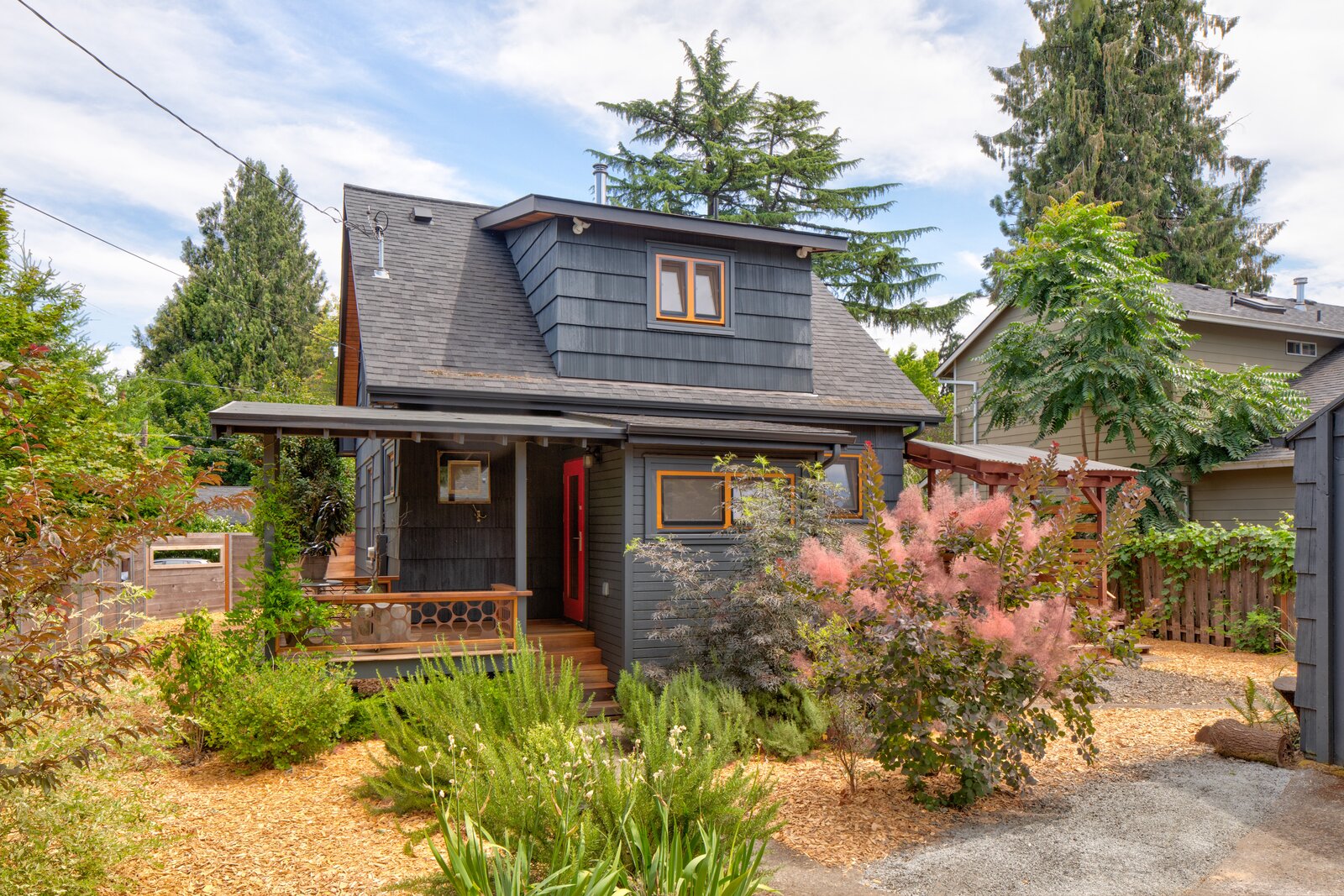 Shored up with salvaged materials and eco-friendly updates, this woodworker’s retreat won’t stay on the market for long.

One man’s trash, as they say, is another man’s treasure. When Sam Omeechevarria, a woodworker and carpenter, came upon this 1909 bungalow in Portland, Oregon, it was in poor condition, forgotten after the developer, Damir Karin, split the lot and constructed a house next door. Truthfully, Sam wasn’t even really drawn to it as much as the fact that the owner would finance it at a fair price. 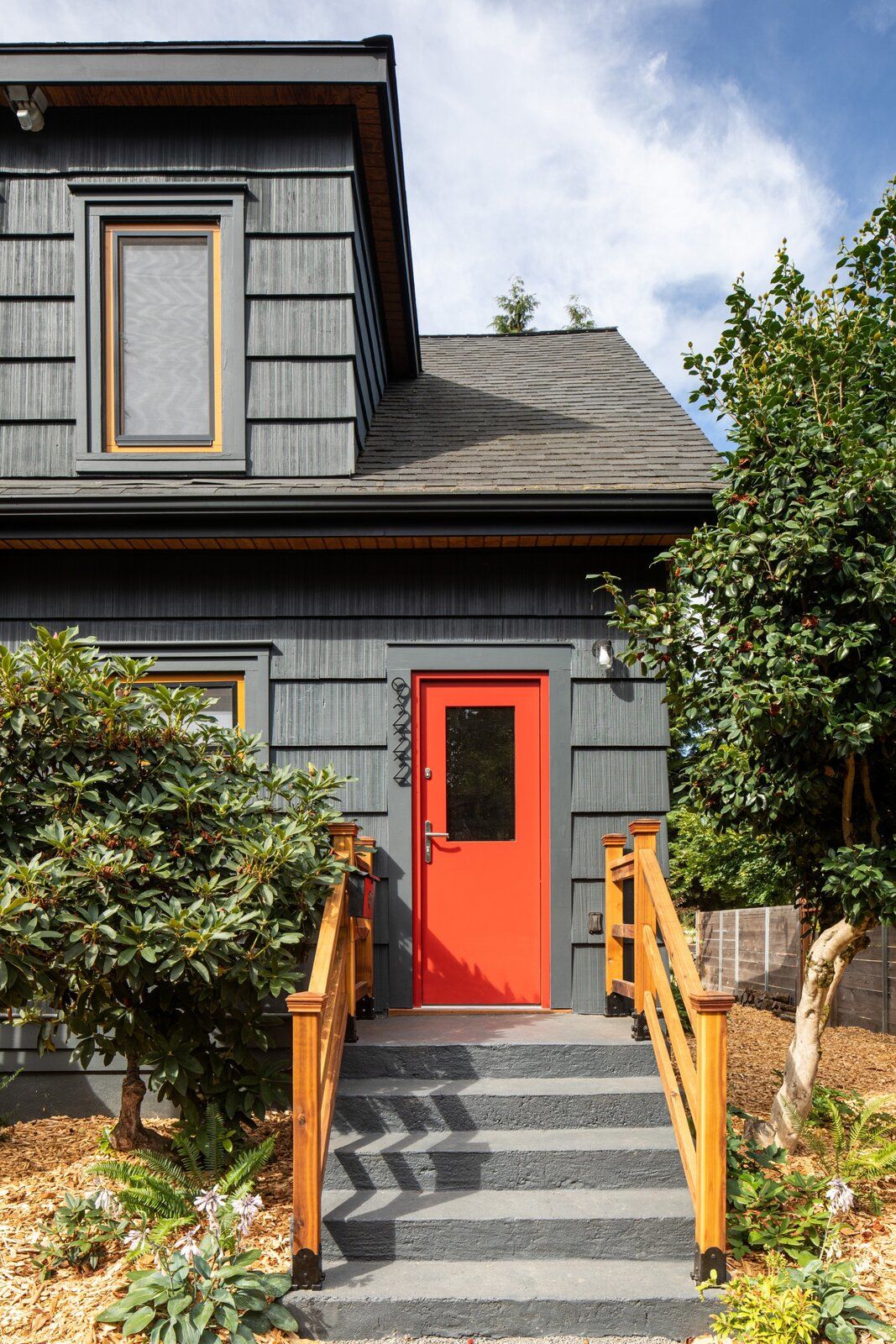 Carpenter Sam Omeechevarria bought this 1909 bungalow near Portland, Oregon’s Pier Park at a fair price because the developer had broken up the lot and built on the other section. It was covered up in vinyl siding, under which Sam was thrilled to discover cedar shake.

It all began when Sam met a real estate developer through an ad on Craigslist-"a colorful character named Dan with stories for days." While Dan was his complete opposite, he liked him, and it seemed that on every other block they passed, he either owned or had owned a property. Sam had recently let his contractor’s license lapse as he focused on creative carpentry projects and launched Western Gold Timber Co. Since he knew he wouldn’t qualify for financing, he relied on Dan, who wound up convincing his partner to sell Sam this house. 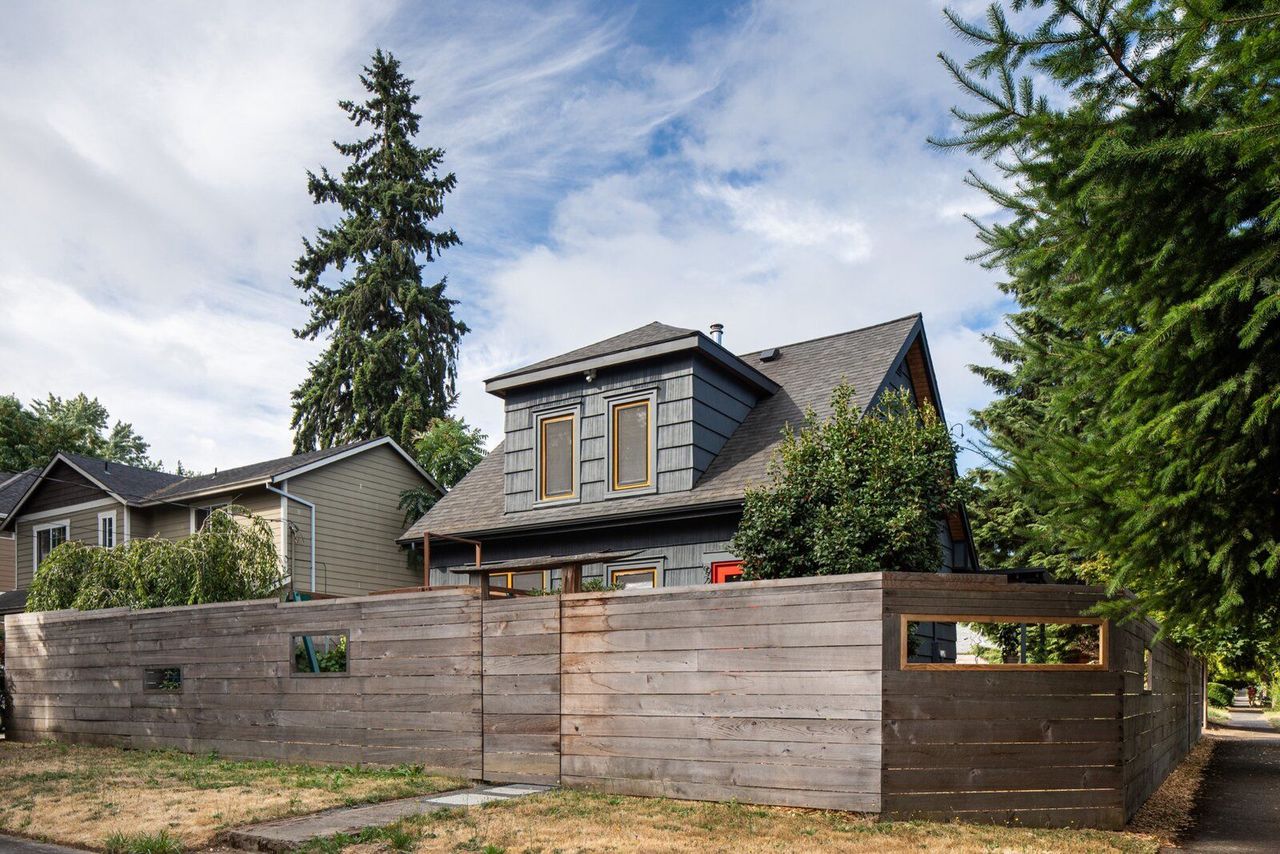 A peekaboo fence is accented with a torii-inspired gate. 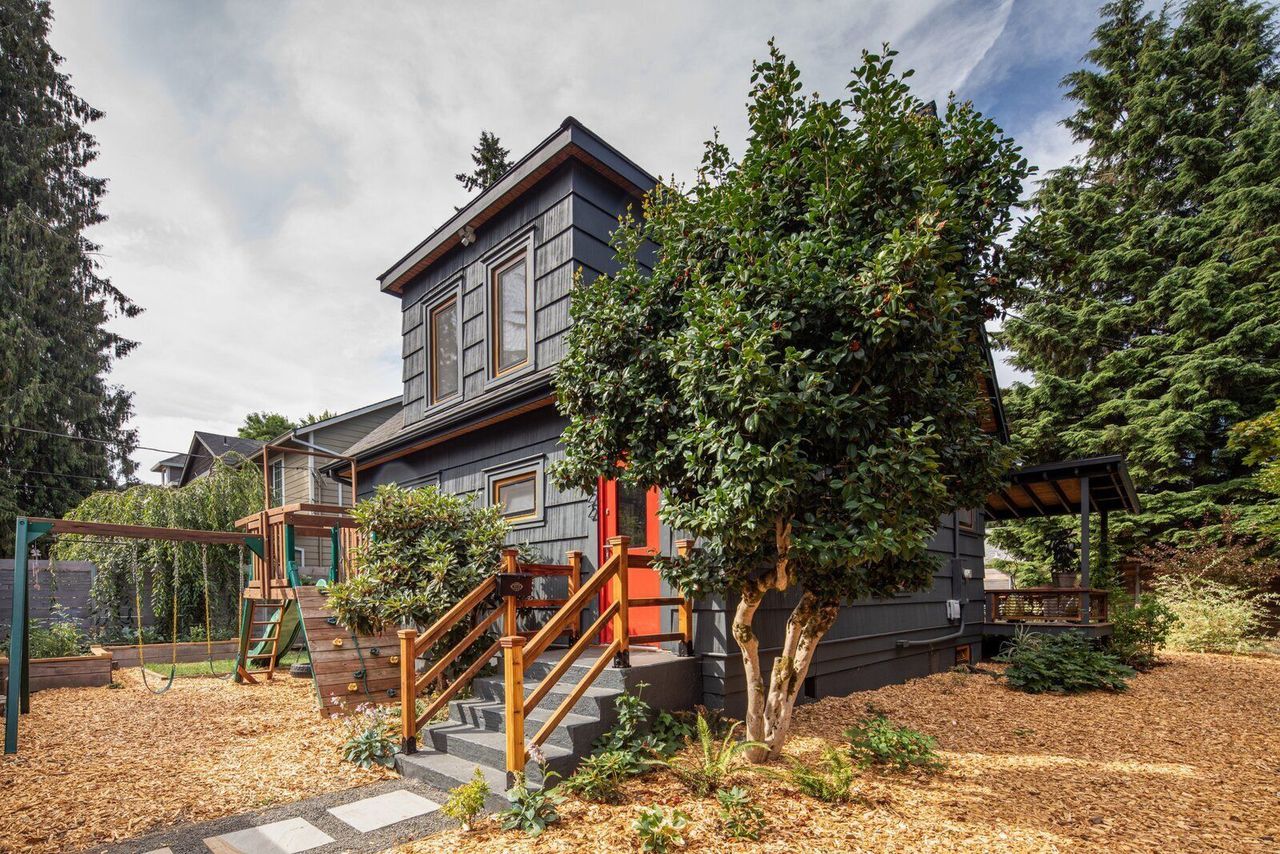 A private play area in the front courtyard is a dream for kids.

The bungalow was covered in blue tarps, had a sagging roof, and a leak in the upstairs bathroom (a 55-gallon steel drum was a makeshift way to catch the water)-and there was no way of knowing what condition it was in under its vinyl siding. It needed to be gutted to the studs, but Sam saw it as a good opportunity nonetheless, initially envisioning the project as a fix-and-flip. Plus, the 87-acre Pier Park was just two blocks away. 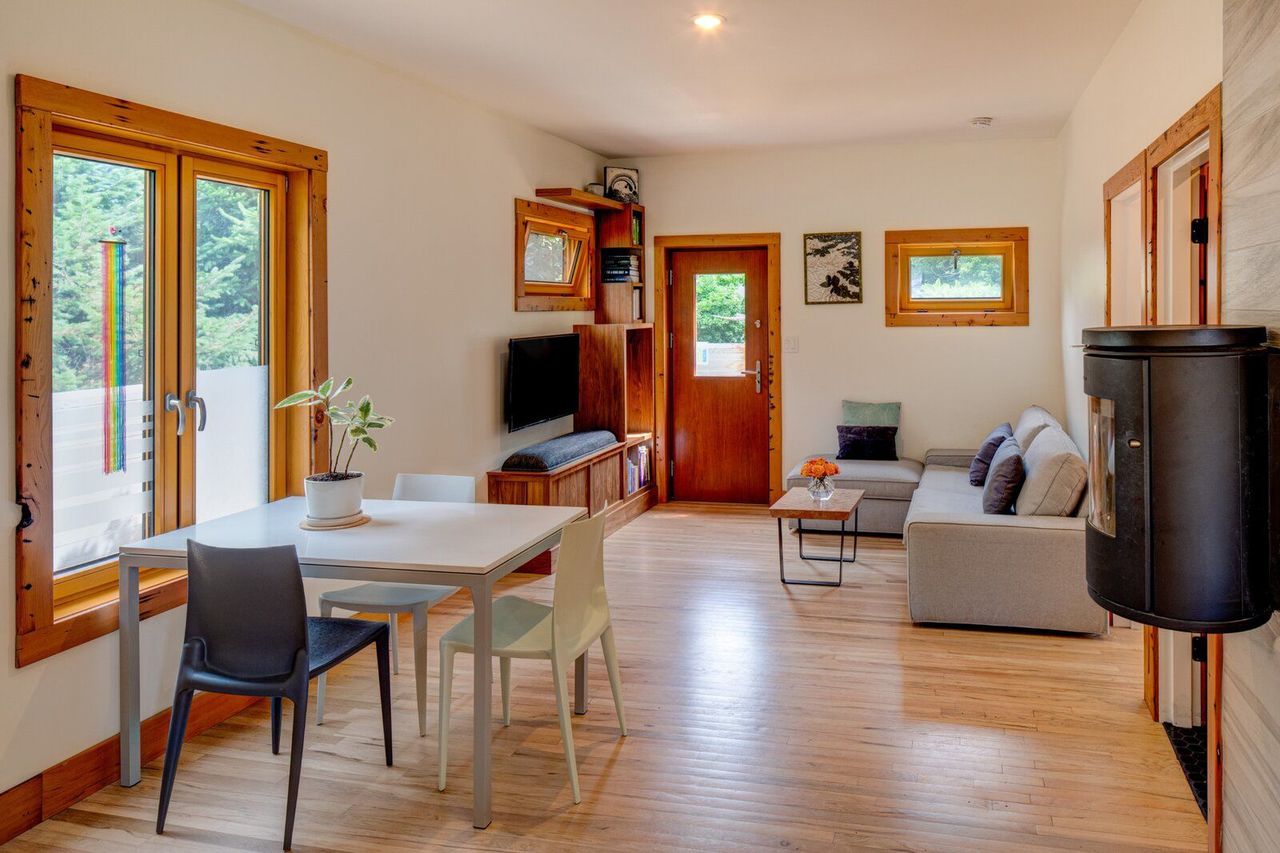 A wall-mounted stove cozies up the living room. "The wood floors are beautiful," says Sam. "Taking all those layers of paint off them was extremely gratifying." He also reclaimed wood from a demolished house nearby for the stained trim found throughout the home. 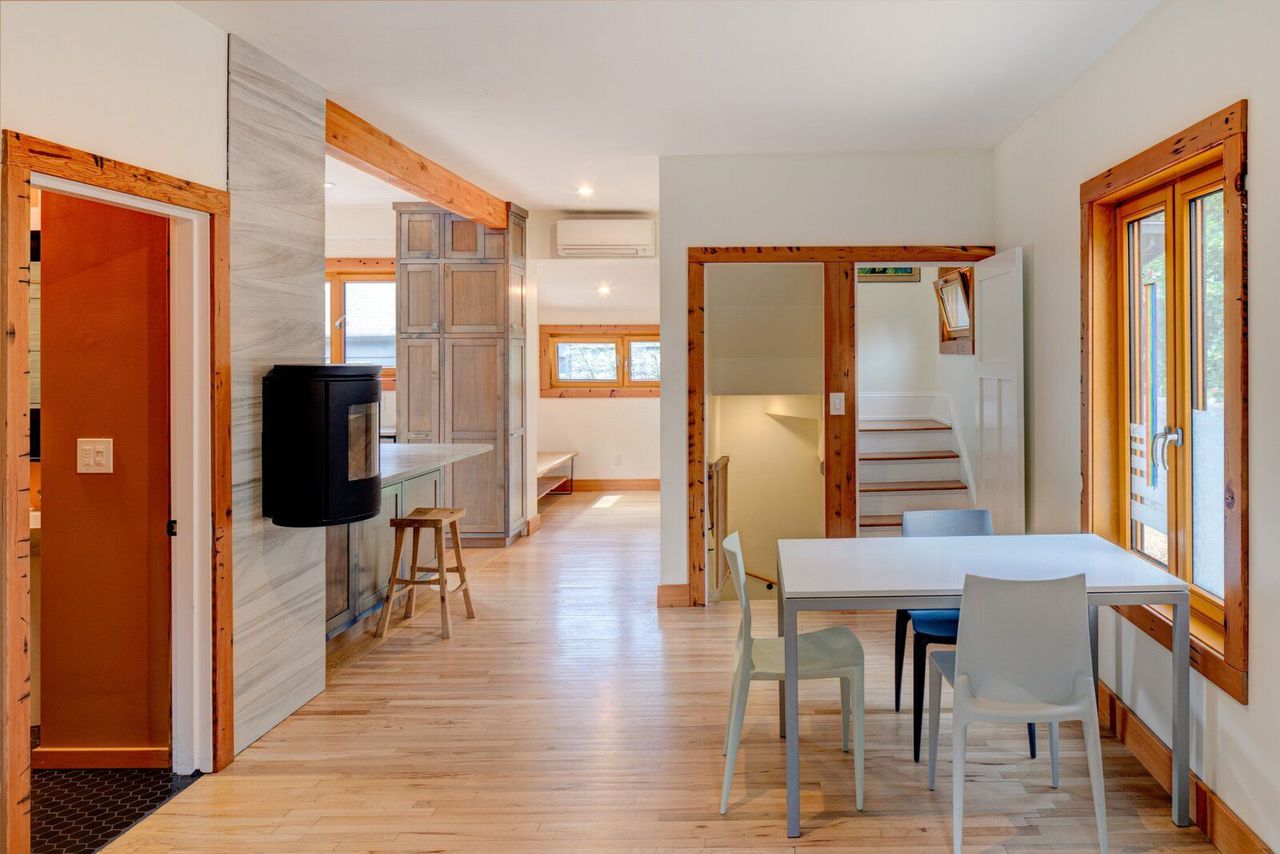 "The plan was brutally cramped with a completely enclosed foyer," says Sam. He opened up the main level, removing the walls separating the entry, kitchen, and family rooms, and bumped out the walls to add extra dense–packed cellulose insulation.

The head-to-toe renovation was an uphill battle. Sam jacked up the house to replace the rotted sills at the foundation and battled the city, appealing to put a stairway in a sensible place. The sagging roof was caused by poorly engineered dormers, which meant Sam needed to install ceiling beams and bring point loads to the basement, pouring new footings within the slab. 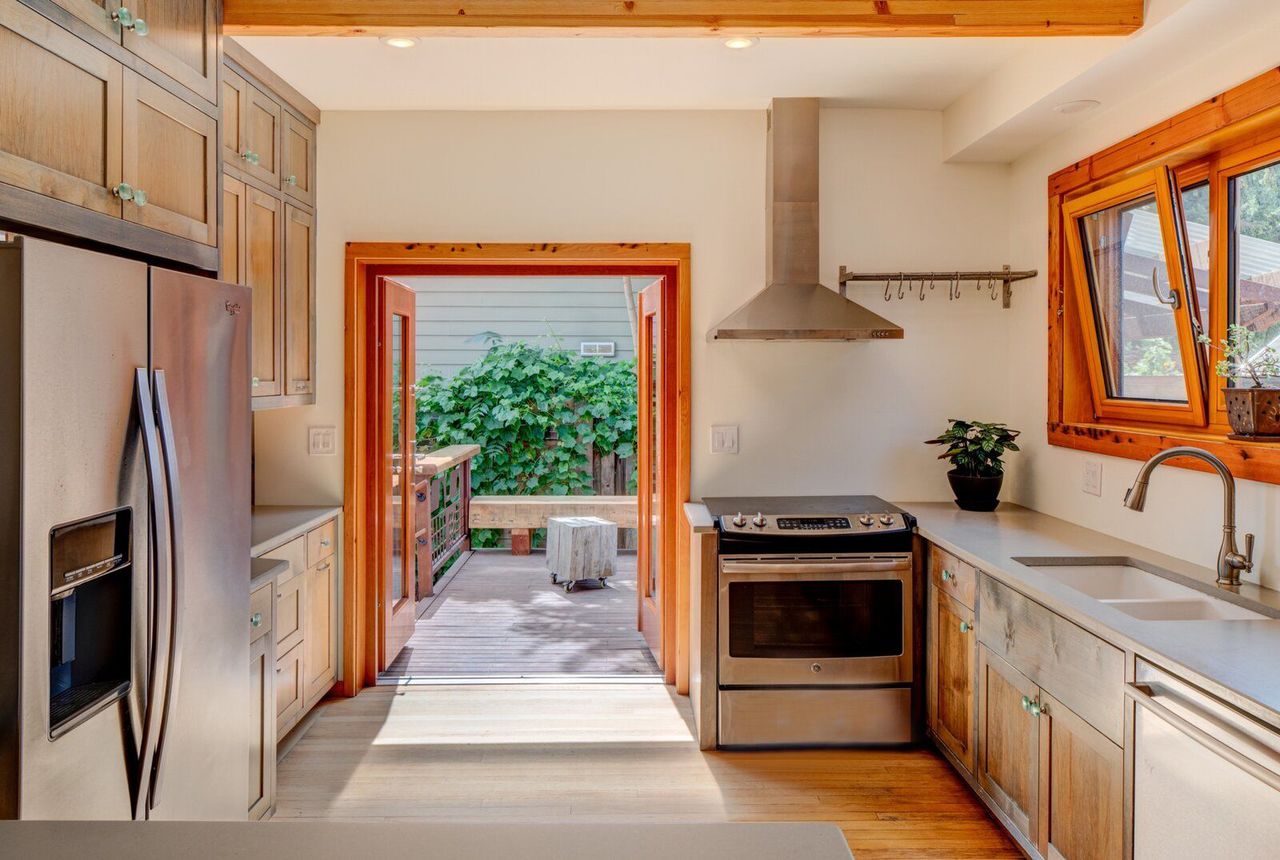 The entirely new kitchen spills out to a back porch for seamless indoor/outdoor living. Previously, it had two small doors as access. 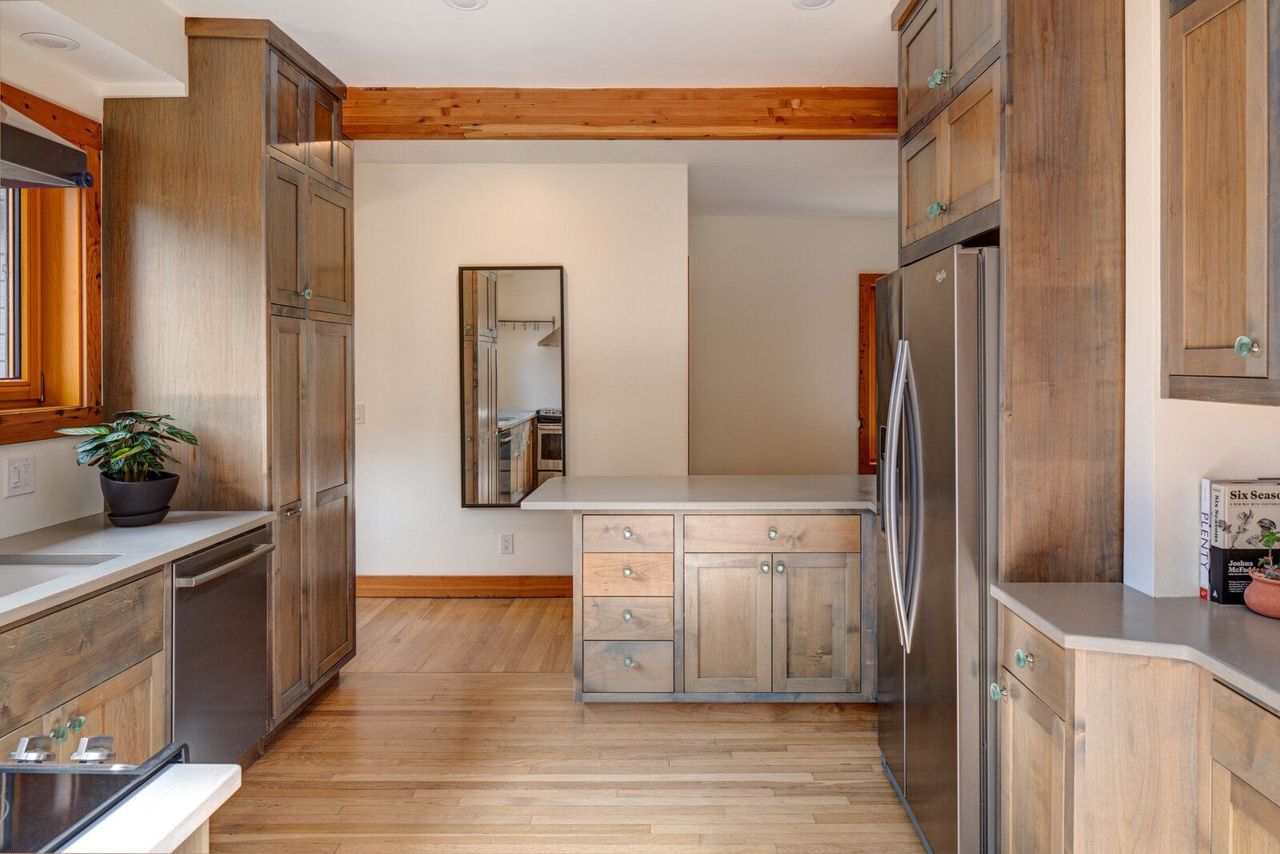 A peninsula offers bar seating in the spacious kitchen. The oak floors were picked up from a dumpster.

However, there was "one huge blessing," says Sam. The ceiling had been built 14 inches below the joists, and opening up more head room created a much loftier feel.

Opening up a "brutally cramped" plan, Sam took the main level down to the exterior wall studs and knocked down the barriers enclosing the entry, kitchen, and family room. Previously, a built-in cabinet blocked the southern sun from the living room. "We live in the Northwest!" says Sam. "The movement of the sun throughout the day, and the declination of the sun through the seasons, has to be in the conversation if we’re going to create good spaces to be in." 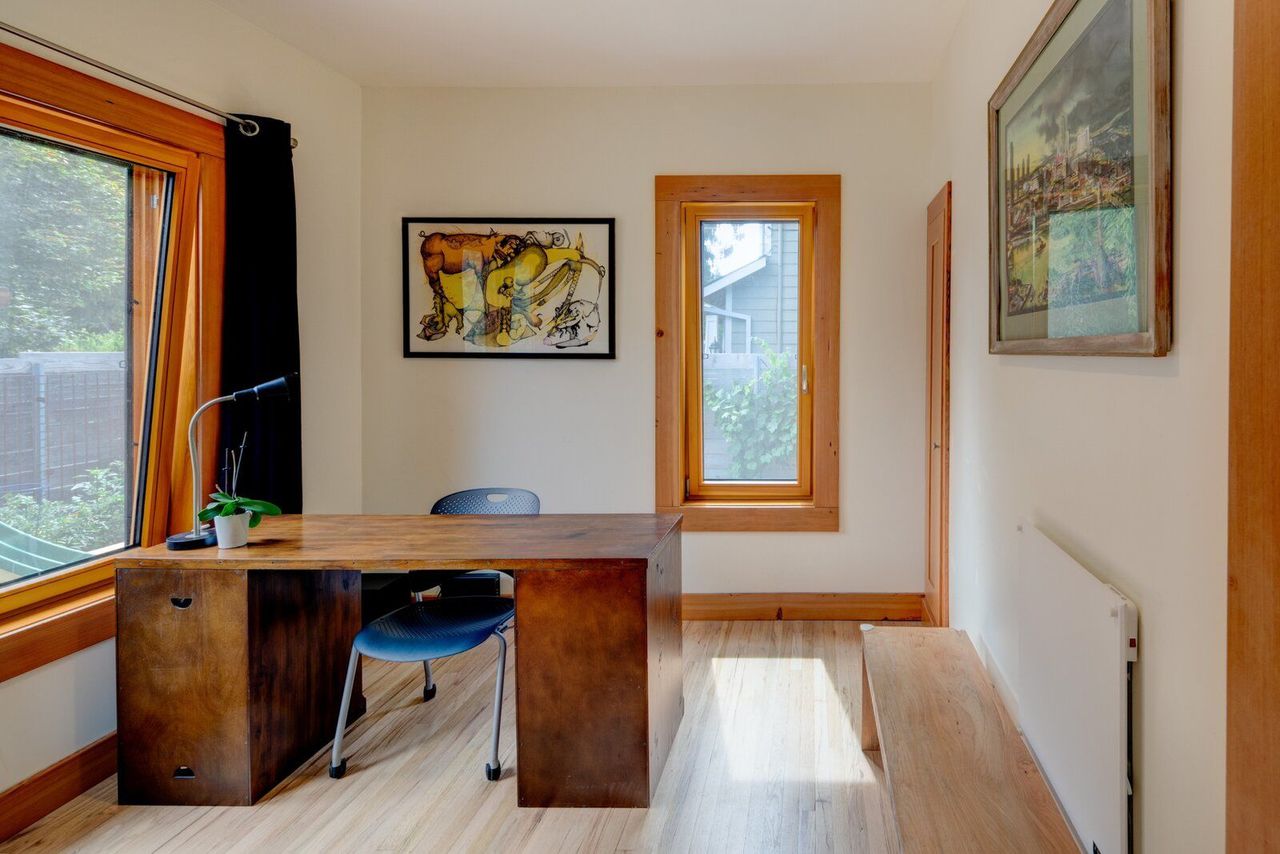 The bedroom on the main level can also serve as a home office.

Over the next five years, Sam poured everything he knew into the home, completing 90% of the work himself and calling on his friends in various trades for the rest. "I pulled everyone I could in-especially towards the end because it was a race to be finished by the time my daughter, Coco, was born-a race I lost by a few weeks," he says.

The imminent arrival of Coco was a turning point for Sam. "That changed everything for me," he says. "The experience of having a child made me realize that I didn’t just need a house, I needed a sanctuary." 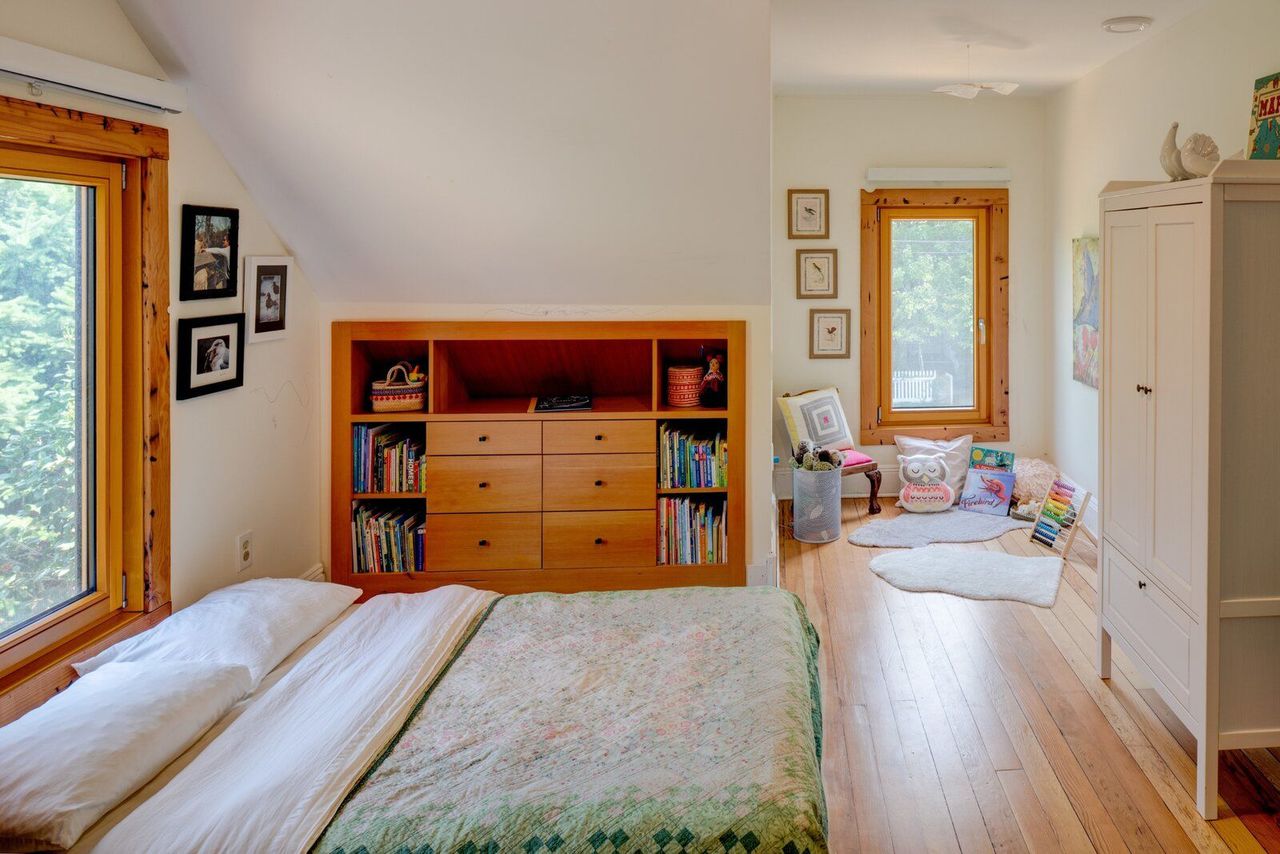 The main bedroom on the upper level features a built-in dresser and bookcase unit. 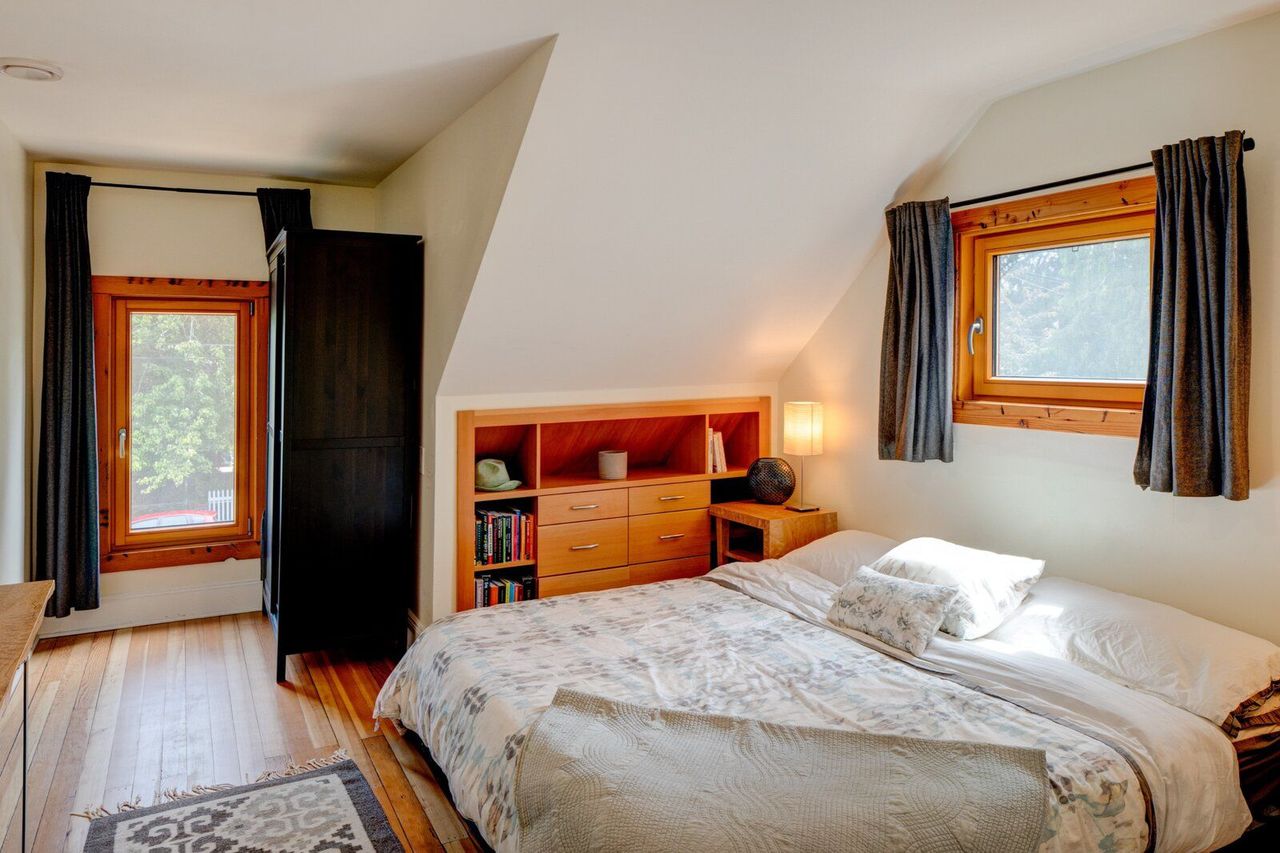 Another upper-level bedroom overlooks the backyard. 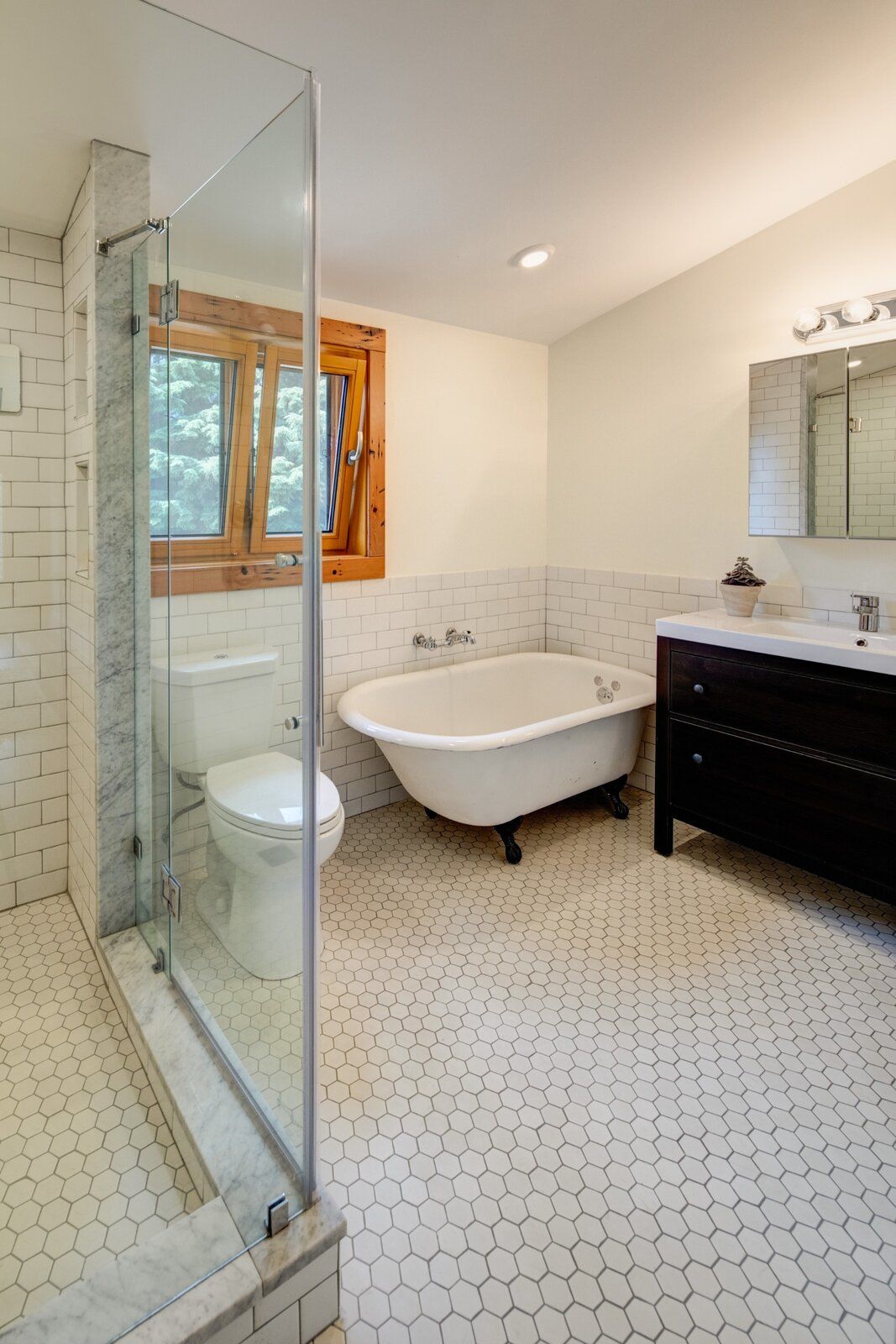 The upstairs bathroom-no longer leaking-features a quaint tub. "A project of this scale would have been pure insanity [with a newborn]," says Sam, who rushed to finish the renovation before the arrival of his daughter, Coco. "It would still be going on, one bathroom at a time, drywall done in sections. It’s not the kind of thing you do with a baby and a new mom if you want to stay alive."

Now, an abundance of natural light across all three floors of the home highlights Sam’s expert millwork: two bedrooms and a bathroom occupy the top level; the living space, a bathroom, and a third bedroom or office reside on the main level; and a storage and laundry area are on the lower level. Additionally, the bungalow emphasizes indoor/outdoor living with a kitchen that leads to a back patio, a separate back porch, and a front play area for kids. A separate garage can be turned into storage or an additional studio. 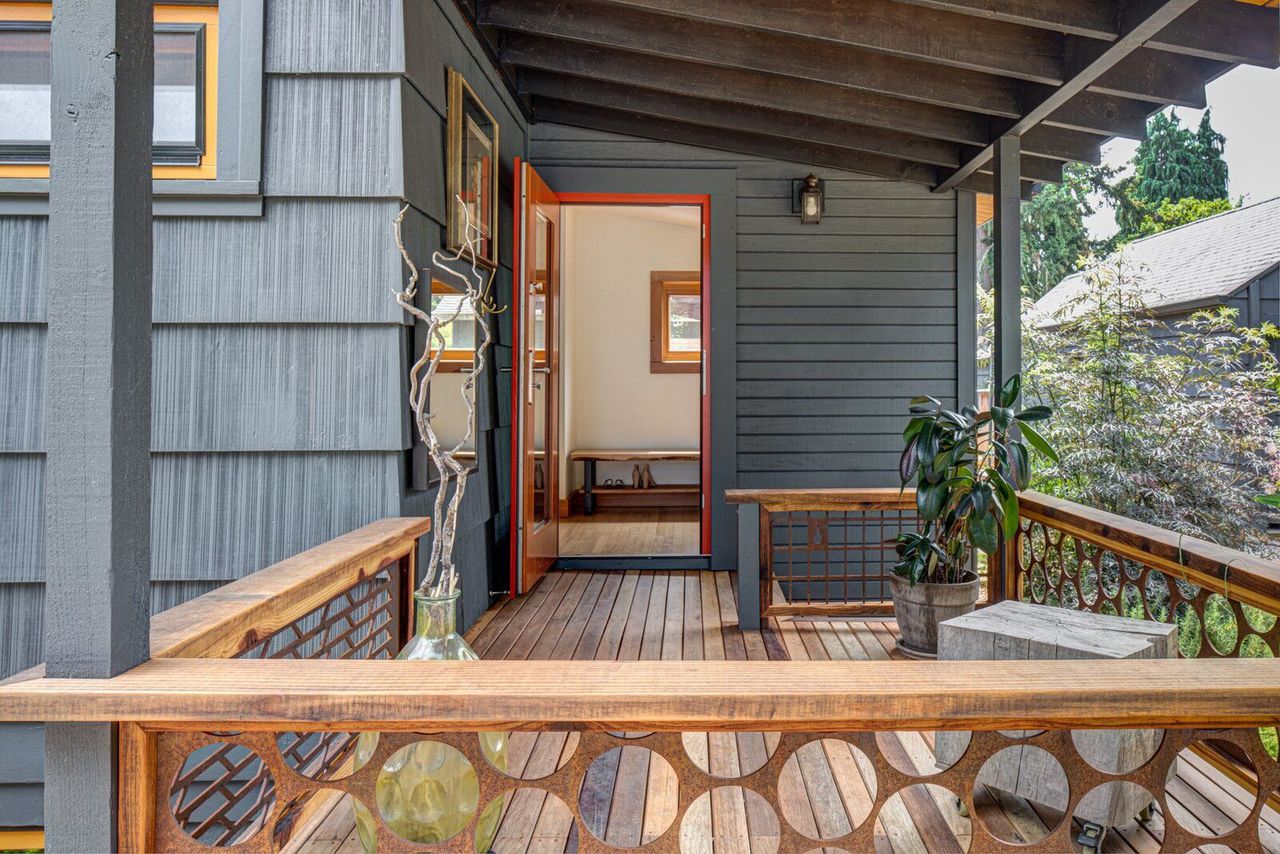 Part back porch, part art installation, the intricate railings here made from reclaimed wood and metal display some of Sam’s more creative abilities.

"From a sustainability perspective, it’s important to address the need to work with our existing stock of houses to reduce the ecological burden," says Sam. "I knew I wanted to build a responsible, well insulated, well sealed envelope and install some good windows, making it cozy."

To that end, many of the materials were salvaged: "The oak flooring I used to extend into the kitchen was in a dumpster of a big remodel I drove past. The trim with the linear rust marks was milled from old rafters." The rest he picked up on cold, icy day around Christmas when a friend who worked in construction called about some wood he needed removed from a job site.

To keep the home comfortable year-round, he installed high-performance windows, heat-recovery ventilation, ductless mini-splits, and a wood-burning stove. The bungalow scores an impressive 10 out of 10 on the Department of Energy’s Home Energy Score, saving on utility bills. 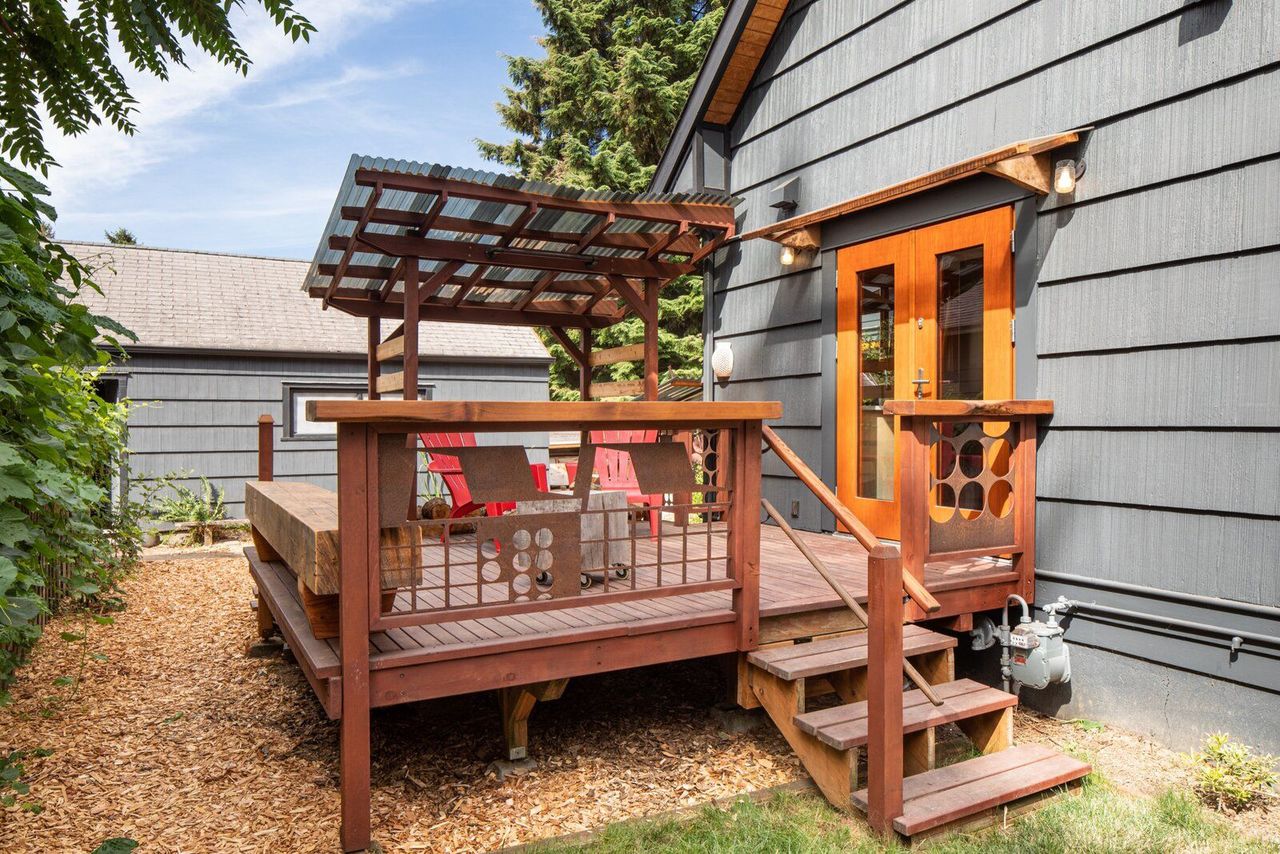 The covered back patio leads to the backyard, which features raised garden beds. The garage is the perfect setting for creative projects or additional storage.

"I love that many of [the home’s] unique aspects come from things that could have ended up in a landfill but didn’t, and I love the effect it has on people," says Sam, who’s ready to hand over the keys to a new owner. His craftsmanship and focus on green building make this 1,500-square-foot home a standout property, and he’s found joy in seeing others appreciate the space.