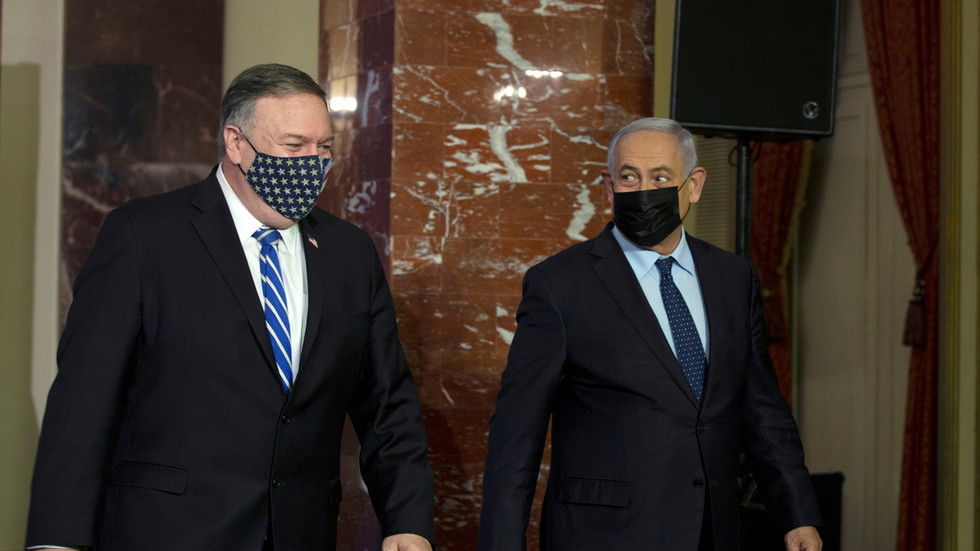 ‘A cancer’: Pompeo tells Netanyahu US will ban funding to groups supportive of ‘anti-Semitic’ BDS movement

The global Boycott, Divestment, and Sanctions (BDS) movement targets Israel’s policies towards Palestine, but organizers behind the campaign deny being anti-Semitic.

Pompeo made clear on Thursday while speaking in a West Bank settlement that he believes the movement is a “cancer.”

“I know this sounds simple to you, Mr. Prime Minister, it seems. It seems like a statement of fact but I want you to know that we will immediately take steps to identify organizations that engage in hateful BDS conduct and withdraw U.S. government support for such groups,” he said.

“It doesn’t sound simple — it sounds simply wonderful to me,” Netanyahu later responded.

Pompeo did not identify what specific organizations could be targeted, but international groups like Human Rights Watch – which has accused Israel of enforcing “discriminatory restrictions” on Palestinians – have been accused of supporting the campaign in the past.

“We want to stand with all other nations that recognize the BDS movement for the cancer that it is and we’re committed to combatting it,” Pompeo said.

The Trump administration has shown unprecedented support for Israel, something that could change if Biden, the presumed president-elect, takes office in January.

Among its signs of support is a reversal of the US position that Israeli settlements in the West Bank are contrary to international law, an opinion held by the BDS movement and other organizations.

“For a long time, the State Department took the wrong view of settlements,” Pompeo said.

The BDS movement responded to Pompeo’s Thursday declaration by accusing the Trump administration of “normalizing” white supremacy and anti-Semitism “in the US and worldwide,” as well as “McCarthyite attempts to intimidate and bully Palestinian, Israeli and international human rights defenders into accepting Israeli apartheid and settler-colonialism as fate.”