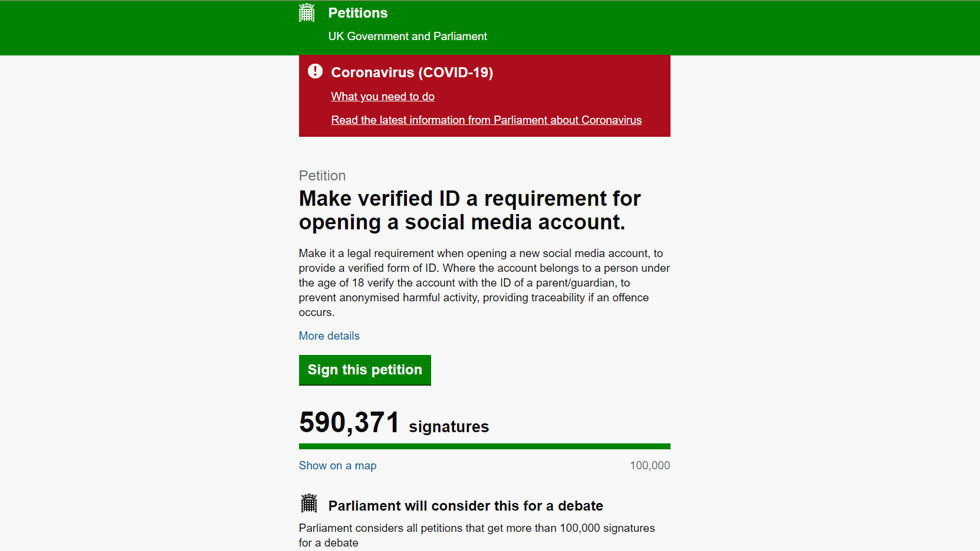 A petition to make verified ID a legal requirement for opening social media accounts has received more than half a million signatures, reigniting debate around social media censorship after racist abuse towards England players.

An official petition, started by former glamour model and TV star Katie Price in March 2021, went viral on Monday, as thousands of Britons signed and shared the online appeal calling for anonymity to be forbidden when opening social media accounts. The 43-year-old cites her disabled son, Harvey, and her first-hand experience of the horrific abuse he’d received as the catalyst for starting the petition.

Price’s petition says it should be mandatory for a social media firm to require verified ID for those opening an account on their platform, and that under-18s would need the ID of a parent or guardian.

In May, the government responded to the petition, stating User ID verification could “disproportionately impact vulnerable users and interfere with freedom of expression.” The government added that such a law could increase risks and harm to whistle-blowers and journalists alike while adding that, also, as many as 3.5 million Britons don’t have access to ID. However, new signatures to Price’s petition flooded in this week following a vile spate of abuse, some of it racist, levelled at England’s football team, who narrowly lost the Euro 2020 cup final on penalties with Italy, on Sunday evening.

Resharing her petition on Monday, Price said it’s “more important than ever” to make a change.

Others further amplified the call, with football club Bemerton Heath Harlequins FC claiming there are “far too many keyboard warriors out there.”

However, many people, perhaps understandably, weren't keen on the proposed law, slamming the notion of censorship and the limiting of freedoms. Some were shocked that people would willingly subject themselves to more “self-censorship.”

“The UK police already track down and ruin the lives of people for things they say on twitter – no matter how tame it is,” one person wrote, adding that people will be too afraid to speak out against the dominant narrative for fear of repercussions. In May, police arrested 12 men in England and Wales after a Tottenham footballer received a barrage of racist abuse from anonymous accounts on Twitter.

Another user also pointed out the hypocrisy of the petition’s proposed move, noting that people will “hate on China and the CCP (Chinese Communist Party) but in the same breath sign a petition for mandatory ID on social media.”

Others said they would never hand over their personal information to social media firms as they didn't know what they would be doing with all their data. One person slammed the “reactionary” nature of British society, while another questioned how such a move could challenge the “structural racism” that allegedly exists in the UK.

The idea was also labelled a "well-intentioned but unenforceable and dangerous idea" by columnist Adam Crafton.

The spate of abuse stemming from England’s Euro 2020 loss, and notably the racist abuse levelled against three black players who missed penalties, has been accompanied by concerning reports of ethnically motivated attacks in the UK.

The online abuse comes after a year of hard-fought campaigning to introduce anti-racism and the association with the Black Lives Matter movement.

The movement, which also saw football players take the knee before games, mirroring acts originating in the US, while broadly supported, aggravated many in the country who have rejected the incorporation of politics into sport. Reports on social media accounts, while still unconfirmed, suggest black people have been targeted since England’s football defeat.