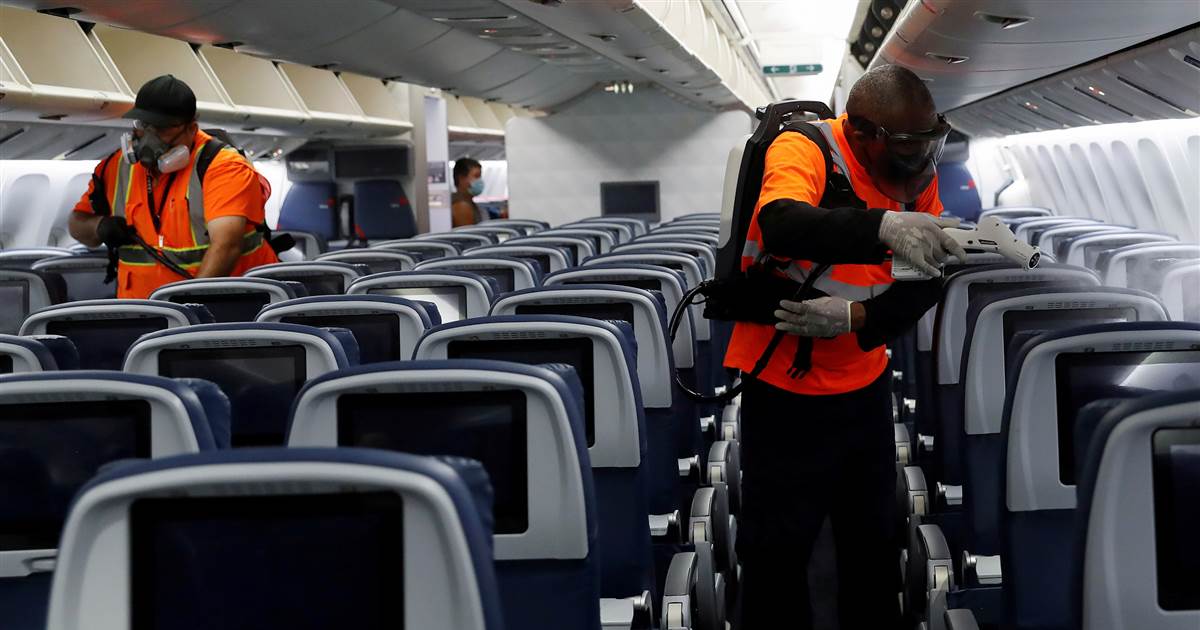 2020 was brutal for airlines. Next year could be even trickier.

The airline industry will return — but reshaped, redesigned and ready to meet new challenges.
The pandemic-pummeled airlines are retooling for 2021, trying to keep industry jobs on life support while strategically streamlining and dangling rock-bottom rates in the hopes customers return.

From Boeing to bailouts, the aviation industry had one of its worst years in 2020, a radical comedown after a run of profits right up to coronavirus lockdowns.

“Airlines were operating at the pace of a record earnings year, through the third week of February — then went over a cliff, like Thelma and Louise, when the pandemic struck,” Bob Mann, airline industry analyst with New York-based consulting firm R.W. Mann & Company, told NBC News in an email.

Passenger volume fell from over 2 million daily at the beginning of March to a bottom of about 90,000 in mid-April, according to TSA checkpoint statistics, as stay-at-home orders and travel restrictions hit. While that number has since recovered, even the busy holiday season saw passenger volume at less than half what it was a year ago, with 1.2 million people traveling on Dec. 27, versus 2.6 million last year.

While it is too early to tell what impact Christmas travel will have on coronavirus infection rates, experts fear an additional spike, as was recorded after Thanksgiving travel. Economic recovery for airlines and other in-person industries hinges on a health recovery, and trying to put the latter before the former ultimately risks both.

Airlines received $25 billion in government assistance from the CARES Act. It required them to keep employees on payroll. After that funding ran out, airlines were forced to reckon with personnel costs, encouraging early retirement and voluntary leave, negotiating down costs with labor unions, and implementing furloughs and layoffs for the remaining gap.

The industry got an additional $15 billion in funding in the new coronavirus relief package signed Sunday night by President Donald Trump. The bill has a few strings attached: Airlines must start providing backpay starting Dec. 1, cap compensation, and not make any dividend payments.

Internationally, some carriers see opportunity in the crisis. Michael O’Leary, the outspoken CEO of discount Irish carrier Ryanair, told the Financial Times his airline could snap up routes and airport slots abandoned by some of his rivals. He also forecast consolidation in the industry, placing orders for the Boeing Max jet he predicts will be a “game-changer” for capacity and fuel efficiency.

“We have consistently been planning for a reasonably quick recovery and constantly disappointed,” he told the Financial Times. “What has changed is the vaccines are arriving… The issue for our industry is, is that recovery in May or August? We just don’t know.”

The Boeing 737 Max returned to service in the U.S. this month after flight equipment was revamped to address safety and regulatory concerns, following two crashes just months apart that killed everybody on board. While the return of the Max was welcome news for the industry — the debacle has cost Boeing at least $20 billion — customers will have to be educated and enticed to get back onboard. Confidence will take time to earn back.

North American airline industry profits are forecast to be down nearly $46 billion in 2020, according to estimates by IATA, an airline trade association. Assuming a national vaccine distribution by the second half of the year, profits for 2021 are predicted to be down by $11 billion.

Those vaccinated or willing to take a chance on a flight will find savings to entice them to step aboard.

Tickets are being sold at steep discounts. Nonstop airfares from NYC to Orlando or Austin, Texas, are on sale for about $50 per ticket, said Scott Keyes, founder of discount ticket site Scott’s Cheap Flights, and Denver to Los Angeles, $71. Though international fares are rising for next summer, there are still deals to be had. A summer 2021 roundtrip from Phoenix to Tokyo can currently be found for $579, with roundtrip flights from most U.S. cities to Puerto Vallarta available for under $300.

Airlines will have to embrace new technologies and retire older, less fuel efficient planes to stay afloat, and overhaul some of its longstanding business models, according to a report by consulting firm McKinsey and Co. The company predicts fewer hubs, longer layovers to pad out operations, more dynamic pricing, and using advanced analytics to adjust cruising speeds and gate assignments to make it easier for passengers to make tight connections.

The industry has leaned in heavily to adopting new cleaning and safety protocols to mitigate coronavirus risks during air travel, installing high-performance air filtration systems, sanitizing planes, and educating staff. Passengers are required to wear masks and can be placed on do-not-fly lists for noncompliance. Some airlines now offer pre-flight Covid-19 testing or in airports, and Delta this month announced a partnership with the CDC on contract tracing for international passengers.

It’s still going to be a long winter, and a cold spring.

The number of routes between cities has already fallen and airlines aren’t going to build any new ones unless they’re immediately profitable.

”We anticipate smaller cities and even medium-sized cities within a two- or even three-hour drive of a large airport will lose service,” Becker said.

Airlines built up cash reserves at the start of the crisis, but those will be stretched going into 2021. The hope is that if they hunker down, get lean while being flexible to ramp up when demand returns, they can catch a ride on what is expected to be a surge in pent-up demand when safety re-emerges and widespread travel resumes.

“The challenge is getting to that date,” John Grant, airline analyst for aviation data firm OAG, said in an email. “The industry and airlines will return, not immediately stronger but ultimately reshaped, redesigned and ready to meet whatever the new challenges are.”

Analysts don’t think there will be meaningful further consolidation in the industry unless the vaccine doesn’t go according to plan.

“If the pandemic persists, we will likely see bankruptcies” in the second half of 2021, Becker said.

In a Dec. 21 letter to employees, United CEO Scott Kirby and President Brett Hart thanked staff for their hard work and said that while the vaccines offer promise, the payroll support extension is unlikely, on its own, to bridge the furlough gap until passenger demand is expected to start resuming at the end of 2021.

“We just don't see anything in the data that shows a huge difference in bookings over the next few months. That is why we expect the recall will be temporary,” they wrote. “But as we've said before, we do see the light at the end of the tunnel.”
#Donald Trump  #COVID-19  #vaccine  #Covid  #Coronavirus  #Vaccines
Add Comment