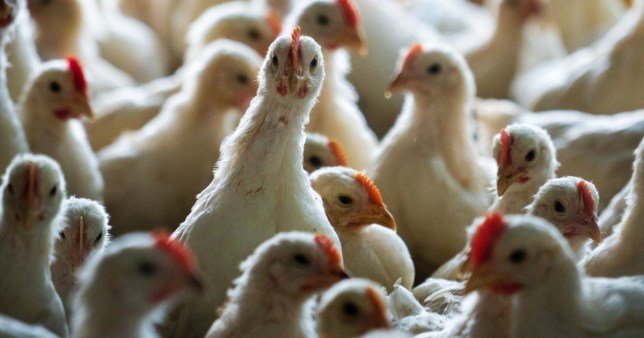 13,500 animals to be killed as UK detects another bird flu outbreak

The Cheshire incident follows an outbreak in Kent.

Thousands of birds are set to be killed after bird flu was confirmed at a farm in Cheshire.

The outbreak was confirmed at a commercial broiler breeder rearing farm near Frodsham on Monday, meaning all 13,500 birds at the farm will be ‘humanely culled’ to limit the spread of the H5N8 strain, the Government said.

It comes after a seemingly unrelated outbreak of avian flu at a farm near the town of Deal in Kent was also detected yesterday. In that case it was confirmed that 480 ducks and chickens on the site would be killed to limit the spread of H5N2.

In Cheshire, a 3km (1.8 miles) protection zone and a 10km (6.2 miles) surveillance zone have been put in place around the infected site to limit the risk of it spreading – a larger zone than that put in place near Deal.

Public Health England have insisted that the risk to public health from the virus is very low, with Dr Gavin Dabrera, consultant in acute respiratory infections at PHE saying there have never been any confirmed cases of H5N8 in humans.

The Government said properly cooked poultry and poultry products, including eggs, are safe to eat.

Chief veterinary officer Christine Middlemiss said of the Cheshire outbreak: ‘Immediate steps have been taken to limit the risk of the disease spreading and all remaining poultry at the farm will be culled.

‘Birdkeepers should remain alert for any signs of disease, report suspected disease immediately and ensure they are maintaining good biosecurity on their premises.

‘We are urgently looking for any evidence of disease-spread associated with this farm to control and eliminate it.’

Wild birds migrating from mainland Europe during the winter period can spread the disease to poultry and other captive birds, the Government said, as it announced a ‘detailed investigation’ to determine the most likely source of the outbreak.

In late October, the bird flu threat in the UK was raised from ‘low’ to ‘medium’.

The UK has previously seen other minor outbreaks of various strains of bird flu.