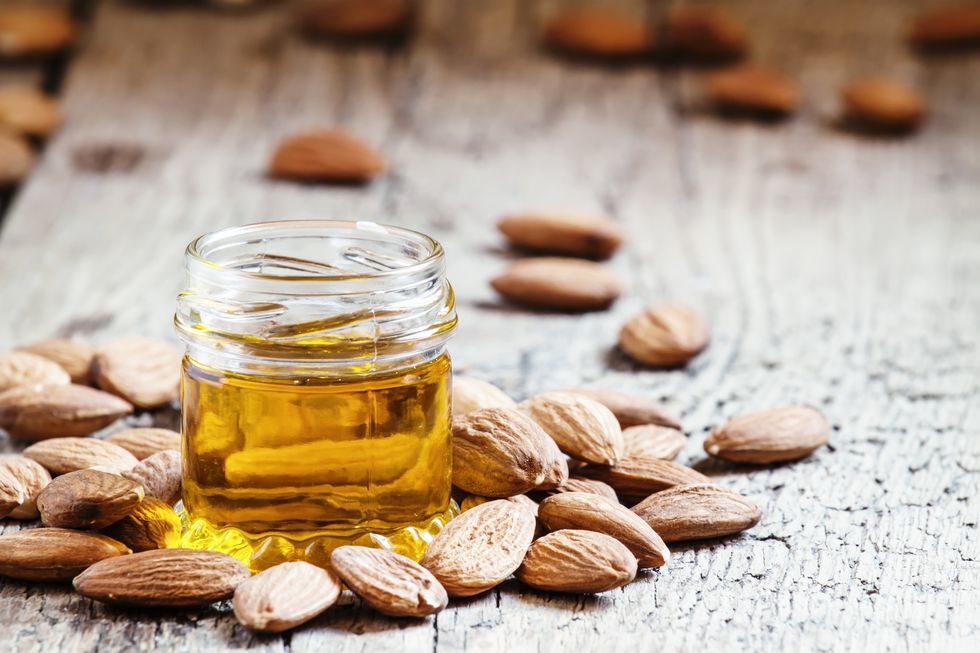 It's an incredible moisturizer for dry and sensitive skin.

Almonds are already a staple of a healthy lifestyle, so naturally some of those benefits carry over to skincare as well. Almond oil—which is extracted from the popular tree nut—is known for its nourishing properties, and is present in all kinds of skincare products, from face and body moisturizers to lip balm. So should you add it to your routine? We got the scoop on the ingredient, thanks to New York City-based dermatologist Hadley King.

What Are the Skincare Benefits of Almond Oil?

In addition to being super-moisturizing, almond oil has several key benefits. Here are a few of them, according to King:

*  It’s a wealth of nutrients. “Sweet almond oil is rich in vitamin E, monounsaturated fatty acids, proteins, potassium and zinc, as well as several other vitamins and minerals,” says King.


*  It’s protective. Thank those fatty acids, which “do a great job of moisturizing the skin or hair,” says King. Plus, vitamin E is a powerful antioxidant. “Regular use will help protect the skin from free radical damage from UV rays and pollution,” adds the derm.


*  It may help reduce stretch marks. Although more significant research is needed, there is some evidence that massaging bitter almond oil on stretch marks may minimize their appearance.


*  It’s anti-inflammatory. “Almond oil also has anti-inflammatory properties so it can be soothing to irritated or inflamed skin,” explains King, who says it's so gentle, it's "safe to use directly on even sensitive skin," adds the derm.

Although it won’t clog pores in those with oily skin, its moisturizing properties make it most beneficial for drier skin types. “Dry or irritated and sensitive skin will benefit most from almond oil,” says King. But there’s one major caveat with this ingredient, regardless of skin type: “Those with allergies to almonds or other tree nuts should avoid almond oil,” says King.

How to Incorporate Almond Oil Into Your Skincare Routine

First and foremost, there's moisturizer. “Moisturizers ideally contain humectants, emollients, and occlusives,” explains King. “The fatty acids in almond oil provide emollient properties, so I think a great way of using almond oil is within a moisturizer that also contains humectants and occlusives.” King recommends Cetaphil Moisturizing Cream. “Non-comedogenic and packed with both hydrating humectants and emollients to lock in moisture, this is a great cream for both face and body,” explains the derm.

As an oil ingredient, it makes a great addition in oil formulations as well. “For those who like body and face oils, almond oil can be a helpful ingredient,” says King, who recommends Carter+Jane's The Everything Oil. “It contains cold pressed, organic prickly pear seed oil, organic avocado oil, organic sweet almond oil, and organic aloe vera,” says the derm. “These ingredients both hydrate and moisturize, and they have antioxidant and anti-inflammatory properties as well.”