Many of us will have run into some technical difficulties over Zoom this year, and it seems the Queen is no exception.

The monarch heard about the impact of the Black Lives Matter movement on the work of KPMG to promote diversity during a virtual visit to the accountancy firm yesterday.

But some gremlins in the system meant the line to Windsor Castle was briefly lost as the Queen chatted with John McCalla-Leacy, the company’s first black board member.

The incredibly polite John can be heard saying: ‘I’m sorry… Oh I’m sorry ma’am, I lost you. I wasn’t sure actually if you could hear me.’

The Queen replies: ‘You just disappeared, all of you.’

The board member was then reminded by the Queen that he was talking about the pandemic before she lost the connection.

He explained the impact on the firm of Covid-19 and the killing of the unarmed black man George Floyd in the US, leading to anti-racism protests across the world. 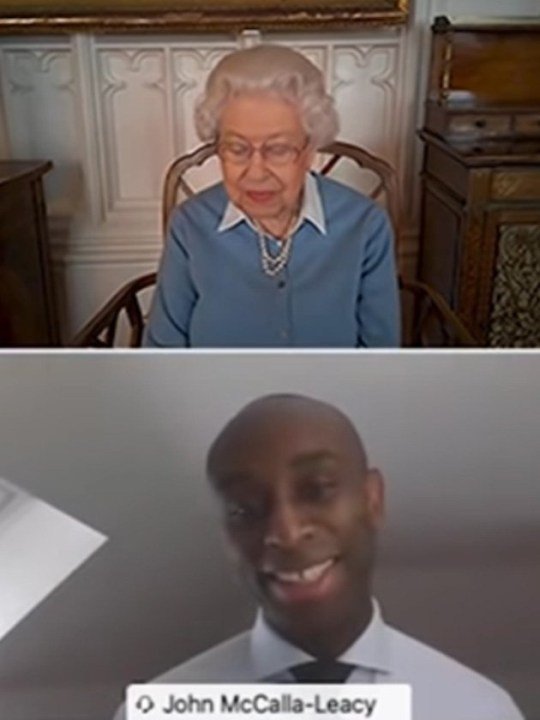 He told the monarch: ‘This year was really an incredibly difficult year for us within the firm, within KPMG because not only did we have to adapt to the many challenges that the pandemic brought.

‘We also witnessed, like everybody around the world, that just deeply, deeply distressing scenes and the event unfold which ignited the Black Lives Matter campaign right across the world but also here in the UK.’

He said KPMG was already a member of a number of equality initiatives and the firm had committed itself to an externally published Black Lives Action Plan.

John, a former international white-water canoe slalom competitor, was supported by the Prince’s Trust early in his sporting career.

Asking the Queen to pass on his thanks to her son, who founded the Trust, he finished the call by saying: ‘Receiving the support that I did, and when I did, changed my life and I will never forget this.’

The Queen replied: ‘I’ll indeed pass it on to my son, who is very proud of the idea of the Prince’s Trust, which I think has helped a lot of people.’

David McIntosh, who joined KPMG as an apprentice in 2017, told the Queen his father was a Falklands veteran who served with the Scots Guard and also guarded Buckingham Palace in the 1980s.

He said: ‘So meeting with you today, brings me very full circle, I’m so very proud of him and I’m sure he’s so proud of me today.’

Speaking about the benefits of video calls, the head of state replied: ‘Well thank goodness for technology, so one can still do this.’

KPMG, which is celebrating its 150th birthday, was founded in 1870, when the firm’s namesake, Sir William Barclay Peat, joined the business.

At the end of the call, the firm’s choir wore Christmas jumpers, hats and reindeer antler headbands as they performed We Wish You A Merry Christmas for the Queen.