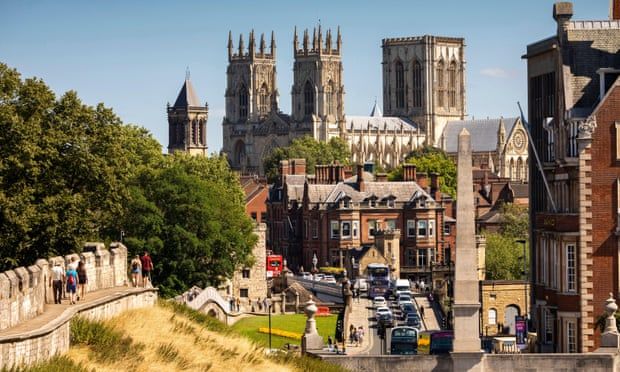 York and North Yorkshire to get mayor under £540m devolution deal

Elected leader would take office in 2024 alongside return of powers from Westminster as part of levelling-up agenda
York and North Yorkshire are to elect a mayor and receive £540m of government investment over 30 years in a landmark devolution deal to be signed on Monday.

The agreement will create a new combined authority across the region led by a directly elected mayor, who will have the power to spend the money on local priorities such as transport, education and housing.

It is the first city and rural region to see devolution on the scale enjoyed by city regions such as South and West Yorkshire, according to the Department for Levelling Up. The unveiling of the plan coincides with Yorkshire Day.

The levelling up secretary, Greg Clark, who will sign the deal with the leaders of North Yorkshire county council and the City of York, said: “Yorkshire Day 2022 is an historic one. It marks the return of powers and resources from London to much of the historic[al] North Riding.

“Levelling up – driving prosperity and opportunity in all parts of Britain – is done best when people locally can forge the future of their area. This deal is a big step in that direction.”

Residents will elect a mayor in May 2024 if the proposed deal becomes reality.

The plans aim to tackle regional inequalities by not only reducing the national north-south divide, but also helping to address economic differences between urban and rural areas.

The chief secretary to the Treasury, Simon Clarke, said: “Local leaders are best placed to know what their communities need so I’m delighted that the people of York and North Yorkshire will be able to directly elect a mayor to deliver on their priorities.”

North Yorkshire county council’s leader, Carl Les, said: “The chance to secure a host of decision-making powers as well as bringing in millions of pounds of investment for North Yorkshire is a huge opportunity to shape the future of the county for many years to come.

“Whether it is improving skills and education, bringing in more investment to the region or helping improve transport links and providing much-needed affordable housing, the deal will enable us to take far greater control of our own destinies.”

City of York council’s leader, Keith Aspden, added: “Given its significance, I would encourage everyone in the city to take the opportunity to look at the details of this proposed deal, which could secure tens of millions of government funding annually to support the local economy, invest in local businesses, drive innovation, particularly around initiatives such as BioYorkshire, and help improve the lives of our residents.”

He said a public consultation is still under consideration, with businesses and residents to be invited to have their say on the details of the deal if agreed.

The Confederation of British Industry welcomed the announcement. Regional director Beckie Hart said it has “long believed that local leaders, supported by the private sector and wider stakeholders, are best placed to recognise and act upon an area’s strengths and development needs”.

The deal is the first of 13 devolution negotiations named in February’s Levelling Up white paper, which detailed plans for creating better opportunities outside the south-east of England.
Add Comment