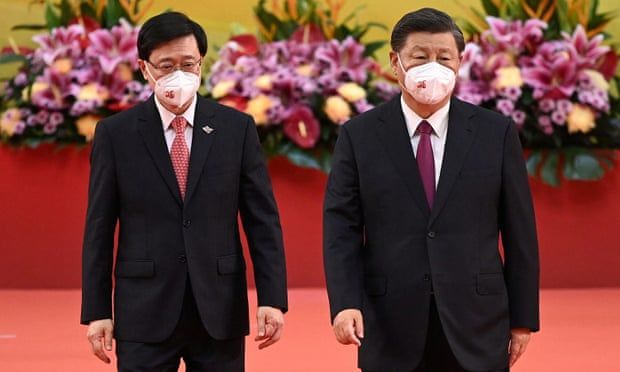 Xi Jinping has sworn in former security chief John Lee as Hong Kong’s new chief executive amid scathing assessments from the UK and US of China’s erosion of rights and freedoms on the 25th anniversary of the end of British rule.

China’s president, on his first trip outside the mainland since the pandemic began, welcomed the new leader, who oversaw the crackdown on Hong Kong’s pro-democracy movement, in a solemn ceremony on Friday morning.

In his speech, Xi described Hong Kong as being ceded by foreign forces after the Opium War, downplaying British involvement in modern Hong Kong. Xi said Hong Kong had made “irreplaceable contributions” to the economic development of mainland China, acting as an “important bridge and window”.

Xi called the one country, two system principle a “time-tested” creation that is beneficial to both people in Hong Kong and on the mainland, adding it should be implemented in the long-term. “Such a good system, there is no reason to change it.”

Lee vowed to steer the territory toward stability after the recent protests and coronavirus pandemic, and confront longstanding issues such as housing. He sounded a nationalistic tone, saying Hong Kong “can make a contribution to the revival of the great Chinese race”.

Anniversary events began with a brief flag-raising ceremony at the Hong Kong convention and exhibition centre, a venue surrounded by huge police barricades, and which Xi did not attend. Previously, Hong Kong activists have rallied outside the ceremony but were warned by national security police not to protest this year.

Events to mark the milestone have been held amid tight restrictions, with crowds vetted and most media excluded. On Thursday, journalists covering the arrival of Xi were reportedly told to leave behind their umbrellas, despite downpours and a typhoon warning. The item has been a symbol of the fight for democracy since 2014.

Before the highly choreographed ceremony began, British prime minister Boris Johnson and US secretary of state Antony Blinken said Beijing had failed to respect the “one country, two systems” arrangement agreed under the deal that ended British colonial rule in 1997.

Vowing not to “give up” on Hong Kong, Johnson said: “It’s a state of affairs that threatens both the rights and freedoms of Hongkongers and the continued progress and prosperity of their home.”

Blinken said Friday was supposed to be the halfway mark of 50 years of promised autonomy under one country, two systems, “yet it is now evident that Hong Kong and Beijing authorities no longer view democratic participation, fundamental freedoms, and an independent media as part of this vision.”

“Authorities have jailed the opposition … raided independent media organisations … weakened democratic institutions, delayed elections,” Blinken said. “They have done all of this in an effort to deprive Hongkongers of what they have been promised.”

Saying a strict security law imposed in Hong Kong by Beijing in 2020 had led to an “erosion of autonomy,” he said: “We stand in solidarity with people in Hong Kong and reinforce their calls for their promised freedoms to be reinstated.”

On Thursday, Xi told selected crowds in Hong Kong that the region had “risen from the ashes”.

“My heart and that of the central government have been with our compatriots in Hong Kong,” he said, according to a translation by the South China Morning Post. “In the past few years, Hong Kong has gone through various severe challenges one after another, and has defeated them. 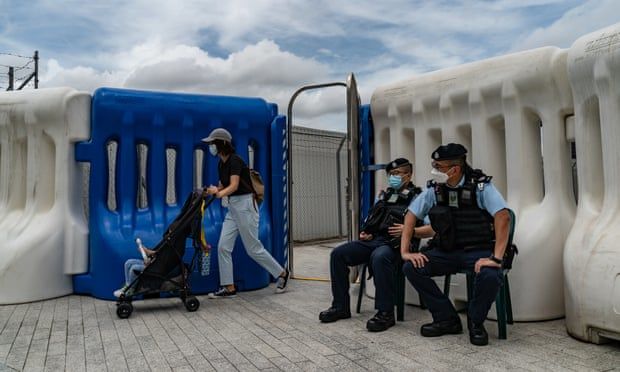 “After the wind and rain, Hong Kong has risen from the ashes, and showed strong vibrancy.

“As long as we stick to the ‘one country, two systems’ framework, Hong Kong will certainly have a brighter future and will make new and bigger contributions to the great rejuvenation of the Chinese people,” he said.

Lee has pledged to unite the city for “a new chapter”, while also promising an even more aggressive approach to counter “fearmongering and badmouthing” by critics.

British foreign secretary Liz Truss echoed Johnson’s comments, and said: “Authorities have stifled opposition, criminalised dissent and driven out anyone who can speak truth to power.

“The United Kingdom’s historic commitment to Hong Kong and its people endures. That is why we continue to challenge China for breaching the legally binding commitments it signed up to under the Joint Declaration.

“We have called out their conduct on the world stage and stood together with our G7 partners in condemning the steady erosion of political and civil rights and Hong Kong’s autonomy.”

Australia also criticised China for curbing the rights and freedoms of people in Hong Kong.