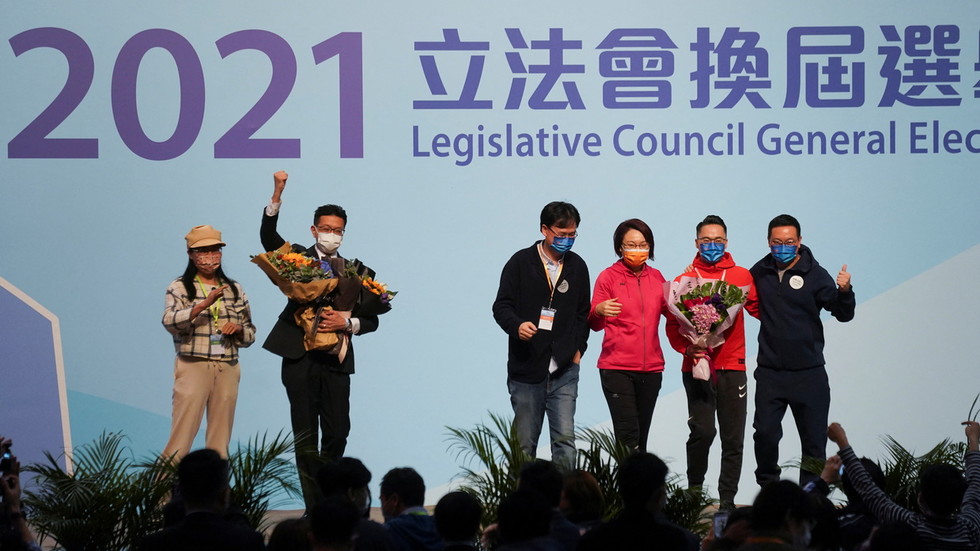 The Anglophone countries’ critical reaction to elections in Hong Kong reveals their inability to accept that the city is no longer under their influence – the result of an Imperialist mindset they cannot leave in the past.

Last week saw the first legislative council elections in Hong Kong since the beginning of the pandemic. This was a significant event, as earlier this year China’s National People’s Congress had overhauled the electoral system, reducing the number of seats and the number of candidates, and vetting those who wanted to stand to ensure their loyalty to China.

Beijing had deemed the measures necessary to restore stability and order to the city, following a year of violent US-backed protests in 2019, which were brought to an end with the introduction of a national security law.

Predictably, the English-speaking nations of the Five Eyes alliance – the US, UK, Australia, New Zealand and Canada – condemned the election and demanded a return to full democracy in Hong Kong, arguing in a joint statement that this was the only means by which it could be guaranteed prosperity. China’s foreign ministry spokesman, Zhao Lijian, responded by noting the city never had “democracy” under British rule either.

Effectively, the Five Eyes statement is meaningless, because the new status quo Beijing has created in the city is here to stay. As those who are dissenters leave, Hong Kong’s identity is being re-fashioned to be pro-China – something that is seen in Beijing’s eyes as the rightful return of its sovereign territory following the legacy of Imperialism.

Of course, herein lies the truth that the western media do not seem willing to contemplate; Hong Kong is not so much a struggle between authoritarianism and democracy as much as it is a conflict of identity. It represents the clash between glorification of what is still apparently believed to be the rightful domain of western imperialism and influence, and China’s rejuvenation following its “century of humiliation” (which Hong Kong was a catalyst for under the Opium Wars).

However, the Anglosphere – especially so Britain under the fanatical Foreign Secretary Liz Truss – has a difficulty accepting that the English-speaking dominance of the world could ever come to an end.

This is perfectly illustrated by their continuing unwillingness to accept Hong Kong is no longer a symbol of their own supremacy, but a territory that is naturally aligned with China. No matter how much noise they make, though, there’s no turning back.

Why do the Five Eyes care so much about Hong Kong? The city is a showcase of the romanticism of British Imperialism, which four of these countries owe their existence to. If you ask right-leaning Brits what they think of Hong Kong, many will conjure up starry-eyed visions of an ultra-capitalist utopia that thrived on low taxation, free trade and enterprise.

It is an ideological dreamland for them and justifies the idea that the British Empire was something to be glorified, rather than tyrannical or oppressive. The reality that Hong Kong was forcibly annexed by Britain from China as part of an effort to sell opium to the country, as well as the fact it was never democratic and dissent was often supressed with brutal force, is downplayed.

The Anglophone nations ignore the trauma felt by other countries through a recurring attitude that any mistakes made were long in the past, so should be forgotten about, and don’t have to be atoned-for anyway, because “we are the righteous ones.”

As a result, these countries still believe that they have a rightful stake in the future of Hong Kong under the guise of “supporting democracy,” and have sought to approach the Sino-British Joint Declaration with the mindset that it is an “unequal treaty” of old. Despite the handover, they still believe they are righteous guardians who “protect” their prized colonial city from the country which it is actually part of.

Further to that, it was envisaged by the English-speaking world that Hong Kong was to be the “model” for China’s transformation – a catalyst for change and liberalization on the mainland, and not the other way around. The Chinese were supposed to humbly “learn” from this exemplary Anglophone colony.

Therefore, when Beijing decided to end the unrest in Hong Kong – which was started by people there, who, because of that imperialist legacy, did not truly accept they were part of China – it committed the unforgiveable sin of deciding to sort out its own affairs in its own sovereign territory.

The British press have portrayed events in Hong Kong as if they constitute some kind of foreign invasion, as seen by the labelling of politicians as “Pro-China candidates” as if their whole presence is illegitimate.

Given that the Five Eyes countries, and the UK in particular, have repeatedly attempted to assert their authority over the city’s affairs, is it any wonder that China is now vetting candidates so strictly? Beijing rightfully sees the city as having been used as a conduit for foreign influence, and the meetings of activist Joshua Wong with US house speaker Nancy Pelosi, and businessman Jimmy Lai with former US Secretary of State Mike Pompeo, former Vice-President Mike Pence and former national security adviser John Bolton tell their own stories, as much as the western media may try to dismiss them.

Claiming the protests in Hong Kong were in the name of “democracy” does not change the reality that they were encouraged by foreign interference, and the same would not be tolerated in Washington, London, Canberra, Auckland or Ottawa.

The Anglophone world’s obsession with Hong Kong is a firm demonstration of its glorification of its own Imperialism, its belief in dividing and subjugating China, and its self-righteous, two-centuries-long crusade against the country.

For them, Hong Kong is a symbol of the greatness of the British Empire, but this attitude will ultimately change nothing, thanks to China’s intrinsic national belief in reasserting itself against that very legacy. It is a mindset which not only predated the Communist Party, but will also outlive it too. The Five Eyes will eventually learn that they cannot turn back the clock.