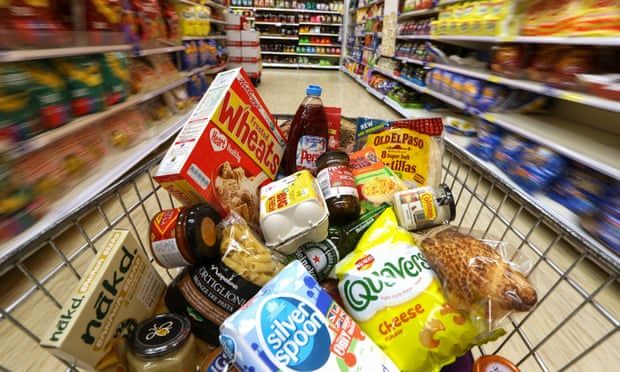 Britain’s inflation rate has soared to the highest level since the early 1980s. After a record increase in gas and electricity bills in April, inflation is the highest in the G7. Having reached 9% last month, it is above the 8.3% rate in the US and Germany’s 7.4%. Japan, an economy characterised by low inflation for decades thanks to an ageing population, has the lowest rate at 1.2%.

Here are some of the reasons why prices are rising faster in the UK than in other major economies.

Britain is a net importer of energy, meaning it is exposed to global price shocks. The post-lockdown surge in oil and gas prices, exacerbated by Russia’s war in Ukraine, is no exception. However, some other countries have done more in response.

France has a 4% cap on electricity price rises, helped by state ownership of the energy producer EDF. The country also sources the majority of its energy needs from nuclear. 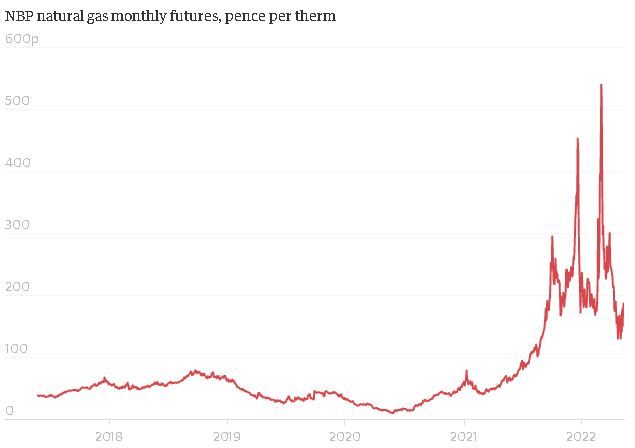 Italy has a windfall tax on energy firms and is spending €8bn (£6.8bn) to shield consumers from higher bills. Spain and Portugal are capping gas prices after winning approval from the EU. Germany has cut fuel tax by 30 cents a litre, compared with a Britain’s 5p cut. Ireland has cut public transport fares by 20%, while Spain and Belgium have cut VAT on energy bills – something Boris Johnson claimed could be done after Brexit, but has failed to enacted.

The UK government has announced £22bn of support for high energy costs for the current financial year, including cuts to fuel duty, a council tax rebate and repayable loans on energy bills. The measures do not, however, influence the headline inflation rate.

Labour says the UK is the only country in the G7 where the government is raising taxes in the middle of the cost of living crisis, after the chancellor, Rishi Sunak, pushed through an increase in national insurance contributions last month.

Brexit and a slump in the pound

Britain is a highly open economy with total trade equivalent to 60% of GDP. The UK’s manufacturing base is also smaller than countries such as Germany and Italy.

Disruption from the pandemic, along with China’s “zero Covid” policy, has pushed up freight prices and caused costly delays. However, companies in Britain face additional costs from Brexit, with reams of paperwork and border delays adding to the pressure. 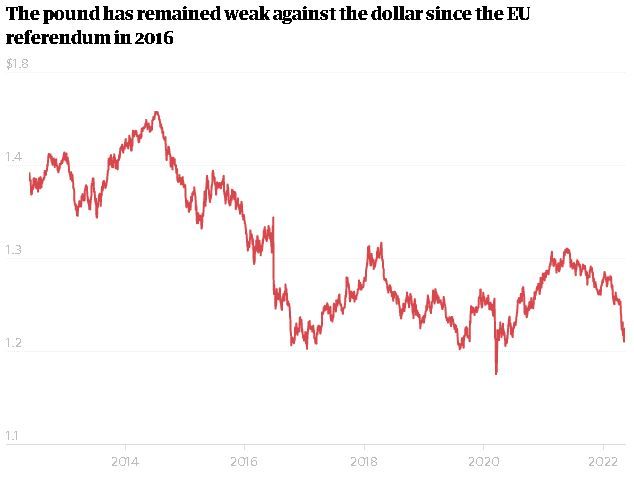 The EU accounts for about half of total imports. Though just under half of food consumed in Britain is produced domestically, including the majority of grains, meat, dairy, and eggs, much comes from the EU.

The thinktank UK in a Changing Europe estimated post-Brexit trade barriers pushed up food prices by 6% between December 2019 and September 2021.

The pound has slumped in recent months, dropping to the lowest level against the US dollar since the early days of the pandemic. This will add to inflation by driving up the cost of imports.

Fewer foreign workers are seeking jobs in the UK after Brexit, while many older people left the workforce during the pandemic. Labour shortages are leading companies to increase pay, adding to their wage bills, and leading them to raise the prices they charge for goods and services.

Unemployment has fallen to the lowest level since the mid-1970s, with the number of people out of work below the number of vacancies for the first time ever. Annual average pay growth, excluding bonuses, has risen to 4.2%, among the fastest rates for a decade. 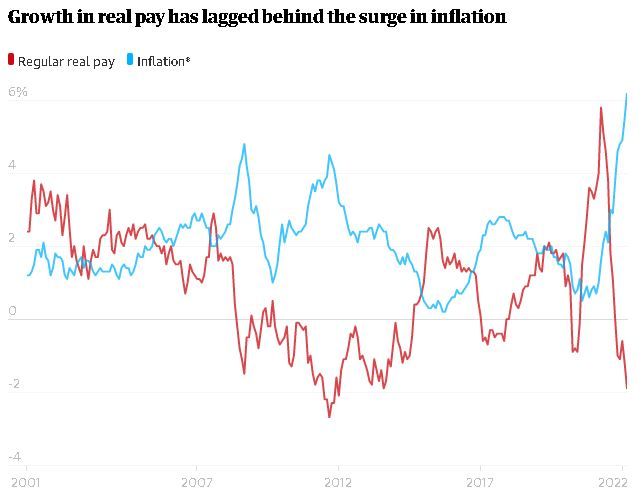 The Bank of England believes domestically generated inflation is higher in Britain than in the EU, where wage growth in the year to the final quarter of 2021 was 1.6%. However, it is less pronounced than in the US, where one measure of wage growth hit a record high of 6% in March.

However, average pay growth is still failing to keep pace with the soaring cost of living.