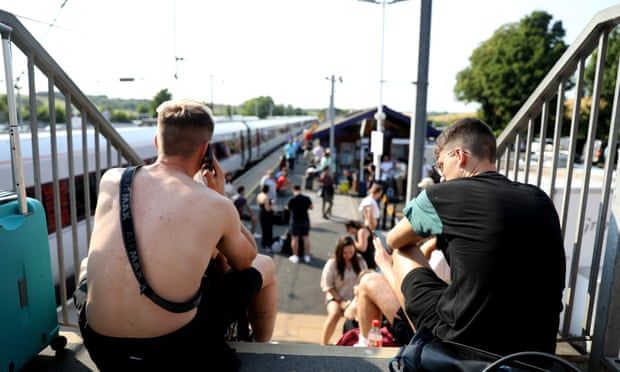 Why do Britain’s roads melt and its rails buckle in heat?

Extreme temperatures have led to widespread problems and disruption on Britain’s railways, with trains running at slow speeds and mainlines closed. Airport runways and some roads have also shown they can be susceptible to heat.

Steel rails expand and tend to buckle in the heat – whatever the climate. According to Network Rail, railways worldwide are designed to operate within a 45C (113F) range, according to the local conditions. In the UK, steel rails are “pre-stressed” to summer temperatures of 27C, whereas in countries with hotter climates, rails are pre-stressed to higher temperatures.

Sleepers and ballast must keep the rails in place in the British winter and summer. When the temperature hits 40C, rails can reach 60C and expand and buckle. A train travelling fast over rails can hasten that process through the heat caused by friction, and could be in more danger should buckling occur – hence the widespread speed restrictions.

The overhead wires on electrified routes also expand and sag in the heat, and contract in cold weather. Engineers have solutions, with the tension automatically mitigated by a pulley system. But eventually the counterweights hit the ground and wires sag – making them more likely to be tangled in a pantograph, the device on top of the train that draws power from the lines.

Motorways and strategic roads are built with modified asphalt surfaces that – so far – should not start melting, being resilient past 60C, or an equivalent air temperature of 40C, according to National Highways. However, basic asphalt materials used on local roads – the vast majority – can start to soften at temperatures of 50C. At that point, Prof Xiangming Zhou, the head of civil and environmental engineering at Brunel University, says: “The road can get soft and greasy, and it is difficult for cars to brake.” This is why councils have put gritting lorries, more usually employed in icy weather, on standby to coat roads in sand and dust. Tarmac and asphalt are cheaper and less abrasive to tyres than some materials, he says, but as they are black they tend to heat more quickly in baking sun.

About 4% of Britain’s roads are built from concrete, which is more popular abroad for highways and motorways and can be more resilient, but is not immune to problems of extreme temperatures, as the closure of the A14 shows. The dual carriageway near Cambridge had been built with asphalt over old concrete slabs that expanded and buckled in the heat, creating a bump sufficient to close the road overnight for emergency repairs.

Rick Green, the chair of the Asphalt Industry Alliance, says that for a road to cope with all temperatures is “a significant challenge for design engineers”. In extremely high temperatures the surface “doesn’t melt, but the bitumen in it can soften”, “heightening the risk of deformation”.

Again, some can be concrete – but Luton’s asphalt was the problem once temperatures soared into the mid-30s, says Zhou. In the airport’s words, “high surface temperatures caused a small section to lift” – a buckle in the runway that engineers fixed within hours, but that still caused major disruption to passengers. Whereas local roads are often shaded by trees and houses, runways are fully exposed and under further heat stress from aircraft landing and taking off. Repairs and maintenance are frequent.

Heathrow, which was even hotter than Luton on Monday, also had a runway issue last week, when overnight repair work did not finish in time for planes to land. However, it has two runways and was not forced to stop operations.

So what is the solution?

Network Rail is already spending hundreds of millions of pounds annually on climate change mitigation. Most of it, however, is to counteract erosion or damage through rainfall or storms. Future infrastructure could be gauged to a warmer climate – but then it could be more prone to failure and cracking in cold winter weather when rails contract. Some track materials, such as concrete sleepers, are more resilient at broader ranges of temperature and conditions – and significantly more expensive.

Rails are already painted white in critical spots to combat heat. Countries with extremes of weather carry out much wider seasonal adjustments to track, which is time-consuming and costly. Air-conditioning was not a standard feature of older trains still running. Resilience will become an economic and political choice – and it may be that a few days of outages for heat each year is seen as preferable to the bill for modifications.