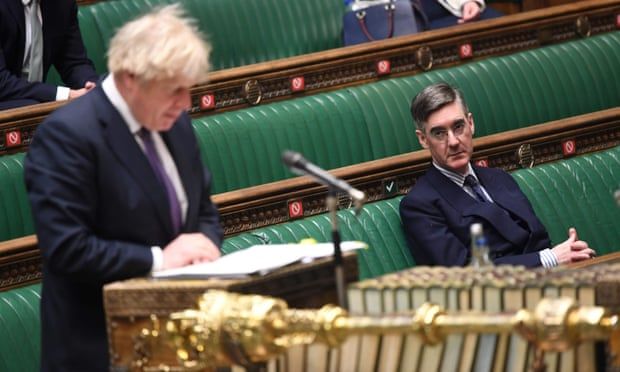 Potential rises in taxes or national insurance have sparked a significant backlash, including among Tory MPs

A significant rebellion is building up against plans to fund social care changes that are expected to be announced this week.

Despite cabinet ministers scrambling to finalise details of potential rises in taxes or national insurance contributions (NICs), reports of the latest version of the proposals have already sparked a significant backlash.

These are the groups coalescing against the idea:

Members of Boris Johnson’s top team have not been coy about their opposition to breaking a significant manifesto promise. Jacob Rees-Mogg, the Commons leader, wrote in his Sunday Express column about the downfall of George Bush Sr in the 1988 US presidential election after breaking his “read my lips” promise not to raise taxes, before his defeat to Bill Clinton. “Voters remembered these words after President Bush had forgotten them,” Rees-Mogg noted, in a veiled threat to collective responsibility.

Other cabinet members said to be concerned include the business secretary, Kwasi Kwarteng, the trade secretary, Liz Truss, and the justice secretary, Robert Buckland.

Robert Halfon, the chair of the education select committee, said he had “huge worries” about raising national insurance given the impact it could have on lower-paid people, and unless the increase only affected those on incomes above roughly £40,000, he would struggle to vote with the government.

Alex Stafford, a “red wall” MP who represents Rother Valley in South Yorkshire, also said taxes should not be raised “willy-nilly” without concrete plans for how the money would be used. He said: “My concern is if they just add an extra 1% on national insurance or whatever, but no actual fundamental way to make social care provision better, it’s a bit pointless … We can’t just raise it without a new way of providing social care.”

Mark Pritchard, a backbencher who represents the Wrekin in Shropshire, warned of the wider impact on the UK economy of raking in more taxpayer money, saying there should be “more ‘tax carrots’ than sticks”.

The Yeovil MP Marcus Fysh hit out at “the unimaginative response of going for tax rises”, while Dehenna Davison, the MP for Bishop Auckland, said the Conservatives “absolutely cannot go against this manifesto”.

Stephen Hammond, a former health minister, said there were better ways to fund spending increases in social care, and warned a NI rise could lead to a sense of intergenerational unfairness.

Keir Starmer has signalled Labour will not support the move. He told the Daily Mirror: “We do need more investment in the NHS and social care but national insurance, this way of doing it, simply hits low earners, it hits young people and it hits businesses. We don’t agree that is the appropriate way to do it. Do we accept that we need more investment? Yes we do. Do we accept that NI is the right way to do it? No we don’t.”

The shadow foreign secretary, Lisa Nandy, said over the weekend she was open to a wealth tax to pay for social care, after Andy Burnham, the mayor of Greater Manchester, proposed the idea.

The Federation of Small Businesses

Mike Cherry, the chairman of the business body, hit out at what he called a “regressive levy”, warning it was “yet another outgoing for small businesses and sole traders to worry about against a backdrop of spiralling input prices, supply chain disruption, a deepening late payment crisis, rent arrears, rates bills returning, skills shortages and emergency loan repayments”.

The former top adviser to Johnson, who has been deeply critical of his old boss since leaving No 10 last winter, said the prime minister’s plan to break manifesto promises “is a big policy and political blunder, if you value the Conservative party winning the next few elections”.

He wrote in a blog post: “A core problem with modern parties is they are (rightly IMO [in my opinion]) seen as fundamentally dishonest, incompetent, and out of touch. A core reason is they constantly make clear promises then break them.”

Cummings added that raising taxes would be a big boost for Labour as it would destroy the Conservatives’ attack line at the next election that people voting for Starmer’s party would see their contributions rise. “If ‘they’re all the same’ applies to both parties on tax, this is very bad for the Conservative party. And if Labour are smart enough to vote against the PM’s plan, Starmer will be able to shove this down Tory throats even more powerfully.”