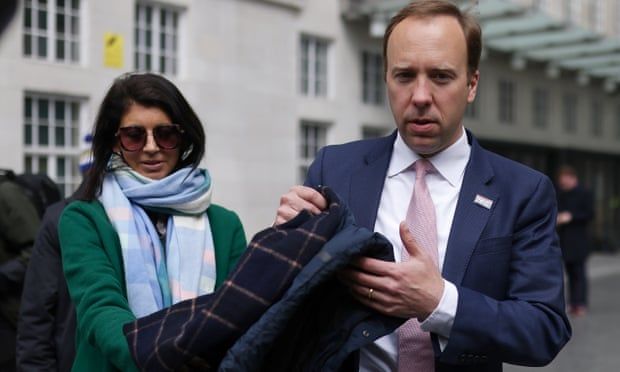 The pay of non-executive directors (Neds) has been thrust into the spotlight by Matt Hancock’s affair and resignation after he was found to have appointed Gina Coladangelo to the role at the Department of Health and Social Care (DHSC) last year.

A 2020 Cabinet Office advert states that lead non-executives will be required for a minimum of 15 days per annum with a salary of £20,000. Labour claim a Ned lead is paid £178 per hour, based on receiving £20,000 for 15 days’ work, and estimating that they would work 7.5 hours a day. The government said it did not recognise Labour’s figures.

NHS Employers figures show that a nurse starting at band 5 of the NHS pay scale is paid £12.77 an hour. Coladangelo was paid £15,000 for 15 days’ work a year in a role that included scrutinising Hancock’s performance as a minister.

On Monday, Labour repeated its demand for all documents and correspondence relating to Coladangelo’s appointment to be published after No 10 confirmed the former health secretary personally gave her the job. Last week the Sun published footage of the pair kissing in Hancock’s office.

An analysis by Open Democracy last week found that Coladangelo is one of at least 16 individuals with close ties to the Conservative party to have been appointed as Neds in Whitehall.

Transparency campaigners have called for a revamp of the system and for data to be made public showing the declarations of interest of each of the 85 Neds working across 19 government departments. There is no suggestion that individual Neds have failed to declare any interests.

Tom Brake, the director of Unlock Democracy, said: “There is now strong evidence that cronyism runs as deeply in Ned appointments as it does in PPE contracts.

“This is a triple-whammy for the effectiveness of government: in interviews better-qualified Neds will lose out to ministers’ sidekicks, the best qualified won’t bother to apply at all when they know they will fail the political loyalty test, and the Neds who do get appointed will be in their masters’ pockets and will do their scrutiny job poorly.”

Angela Rayner, Labour’s deputy leader, said: “Non-executive directors of Whitehall departments are supposed to hold ministers to account, not serve as nodding dogs for their mates who appointed them, while pocketing £1,000 a day from the taxpayer for a few meetings a year.

“Whether it is crony contracts or cushy jobs, Tory ministers are using every opportunity they can to funnel taxpayers’ money to their mates and avoid any form of scrutiny and accountability.”

A Cabinet Office spokesperson said Neds had been appointed through a fair and open competition. “As has been the case under successive governments, non-executive board members bring important expertise and experience from all sectors to provide advice, scrutiny and challenge to government departments,” the spokesperson said.

“There are robust policies in place for the governance of departmental boards, as set out in the code of governance and code of conduct for non executive directors.”
Add Comment