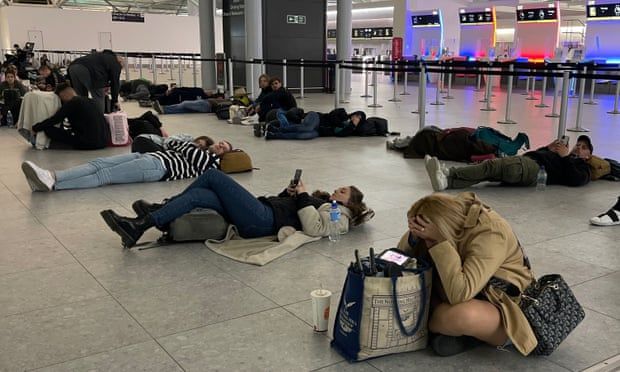 What is causing travel chaos at some UK airports and what are your rights?

With some airlines struggling to cope with the half-term holidays, what should you do if your plans are disrupted?

Holidaymakers have seized the opportunity of school half-term holidays and the Queen’s platinum jubilee bank holidays to take long-awaited trips abroad, but many have met with long queues at airports and cancelled flights. So what is going on, and what can those who’ve had their plans disrupted do?

Why are airports so busy?

The half-term holidays are traditionally the launchpad for the summer tourist season. However, this year many passengers are heading abroad for the first time in two years due to the Covid pandemic. This week marks the first school holidays in England and Wales since the lifting of all UK Covid travel restrictions and the easing of coronavirus test requirements for many EU countries. Many consumers saved money when they were unable to holiday during lockdown, resulting in pent-up demand for foreign trips.

The great getaway has also led to congestion on the roads. Large queues built up over the weekend at the port of Dover for travellers waiting to cross the Channel. The port has warned passengers this will be a “very busy week”.

Why are some airports struggling to cope?

Many of the recent problems can be traced to staff shortages, amid a lack of available workers and record job vacancies across the British economy.

The surge comes as the aviation industry is still ramping up staff levels, after many workers were made redundant or changed jobs during the pandemic.

Thousands of passengers at Manchester airport missed flights earlier in the spring after waiting hours to pass through security. At the weekend there were delays at check-in and baggage reclaim. The airport operator said more than 500 people were going through background checks and security training, but only 200 are due to join this month.

Heathrow airport is hiring 1,000 staff, although believes the current travel boom might be a summer bubble. Demand for flights could fade this autumn as the cost of living crisis and rising energy prices squeeze consumer spending. The industry fears a winter downturn could cause problems for airlines in the traditionally quieter period of the year.

Which airlines have been most affected?

Airlines including British Airways and easyJet announced a string of flight cancellations shortly before Easter, as rising coronavirus cases led to high levels of staff absences.

In recent days, easyJet has cancelled more than 200 flights to and from Gatwick between 28 May and 6 June. Tui also made several last-minute cancellations over the weekend from airports including Gatwick, Birmingham and Bristol, as a result of “operational and supply chain issues”.

My flight’s been cancelled – what are my rights?

The good news is that you are still protected against many things that might go wrong. If your flight is cancelled you have the right to choose between being refunded or rerouted – this could be a new flight with the same airline or a different carrier. The airline is supposed to give you the chance to get to your destination on the same day.

For cancellations within 14 days of travel, you can claim compensation. How much depends on the type of flight, if you choose to take a refund and not travel, or on how much later your new departure and arrival are than your original plan.

For example, if you are rerouted by your original airline and the replacement flight arrives more than two hours later than you had booked, you are entitled to £220 compensation a passenger for flights of up to 1,500km.

If an airline cancels at the last minute and you are forced to buy a new flight with a rival carrier, you can claim the cost of the replacement ticket. If your original flight was more expensive, however, you’d be better off requesting a full refund.

Be aware that airlines often refuse these requests, but you are entitled to the money.

My flight is delayed – what will I get?

The length of the delay and distance of your flight are key. For delays under two hours, you are not entitled to anything. After that, for a short-haul flight under 1,500km you get food and drink (probably in the form of vouchers to use at the airport) and phone calls paid for. You are also entitled to accommodation and transport.

The delay needs to be longer before this kicks in on a lengthier flight: three hours between 1,500km and 3,500km, and four hours beyond that. Compensation applies after three hours, and starts at £220. If the delay goes beyond five hours you can get a full refund if you do not travel, or might be due compensation even if you do get the later flight, depending on the reason for delay.