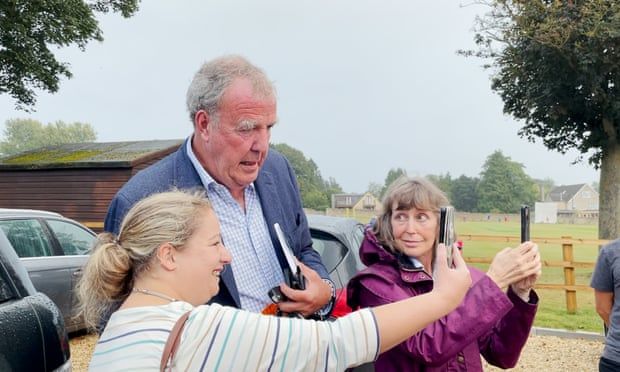 ‘We’re just not used to it’: Clarkson farm shop causes stir in the Cotswolds

Excited fans have descended on the Top Gear star’s rural venture, and not everyone is in raptures

A constant stream of excited fans of “Britain’s most unlikely farmer” arrive on a daily basis in the Oxfordshire Cotswolds, waiting in line at least an hour to buy milk, honey and vegetables from the small shop they have travelled the length of the country – and some, across the world – to visit.

The outlet was opened on the back of the divisive broadcaster’s popular Amazon Prime reality show, Clarkson’s Farm, which chronicles his foray into agriculture.

And on Friday, the patience of the waiting shoppers was rewarded as the man himself performed a drive-by wave from a Range Rover as he entered the car park before almost immediately turning around and leaving again, followed by another vehicle transporting a film crew. 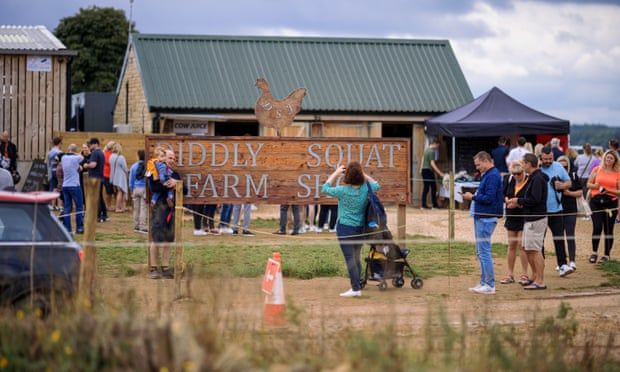 Just over a mile south and down a hill, the villagers of Chadlington are less festive.

On Thursday night, Clarkson, 61, hosted a meeting at Chadlington memorial hall to address concerns over the impact the farm shop has had on peaceful village life. Cheese and wine was provided.

“All of a sudden this car came out of nowhere,” Pauline Cross said, the following morning, as she explained one of the key impacts the surge of interest in Clarkson’s Farm was having on her home of 43 years: an increase in fast and noisy traffic.

“They just come through so fast,” the 76-year-old said as she travelled through the village on her mobility scooter. “It can be bedlam.”

Johanna Hooley, who has lived in Chadlington for six years, and as an estate agent oversees the sale of houses in the village, agreed the problem was the “boy racers”, motoring enthusiasts inspired by the Grand Tour and Top Gear, the series through which Clarkson became a household name.

Waiting for her lunch at one of the village’s two shops, she said: “I walk my dog up the lane, there’s no pavement, it’s quite dark, they are racing up and down there. You can do a whole circuit. You see gangs of young lads walking about. We’re just not used to it.

“We never had this before. I really don’t mind Jeremy. It’s great he’s bringing business to the area. But it’s the people he’s attracting.”

Set on the south-facing slope of the Evenlode Valley, Chadlington is a pretty Cotswold village, frozen in time; 825 people live there, mostly in chocolate-box stone houses. There’s the welcoming Tite Inn, a picturesque country pub and an independent butcher.

Just three miles north of Chadlington is Chipping Norton, which became famous because of its associated “set” including the former prime minister David Cameron, the Blur bassist Alex James and the former editor of the Sun Rebekah Brooks.

And some of the residents have a more moderate take on Clarkson’s looming celebrity presence.

Nigel Ridpath, 53, who has lived in the area for four years with his partner and attended the meeting at the memorial hall on Thursday night, said: “There are clearly more Clarkson fans around the place, you can tell by the sort of vehicles they’re driving, Subarus with gold wheels, there’s absolutely more of that.

“There are people who won’t want the village to ever change. But I love the fact you have rural working-class people here, college professors and, yes, even celebrities. But it is a real place. It’s not the Malibu of the Cotswolds.” 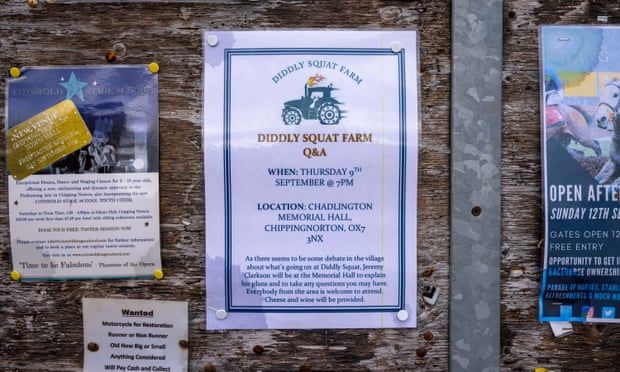 A notice advertising the public meeting where Jeremy Clarkson spoke to local residents about his plans.

Ridpath said the mood at the meeting was “really divided” with both opponents and supporters. “If he just built a couple more bridges and reached out a little bit more he would bring them on side.”

Back at the farm shop, there was some awareness of the controversy down the hill.

Kevin and Louise Hardy, and their dog Sophie, had just joined the queue after a night’s camping in a tent at a site nearby. They had driven nearly 200 miles and four hours from their home in Morecambe, Lancashire to visit the shop.

“I can understand the villagers’ point of view but then again the house prices are up, it’s boosted the economy, we’re going to go shopping in Chipping Norton after,” Louise said.

“The problem is if the farm was somewhere else, people wouldn’t mind it,” Steve said. “But unfortunately for this village it’s on their doorstep. I’m sure not everyone in the village is bothered. It’s change isn’t it? Some people don’t like that.”

While Clarkson attempted to make some concessions at the village hall – offering to host a villagers’ event, clean the roads and look at curbing visitor numbers – he also revealed plans to convert the site’s lambing shed into a restaurant, so this bucolic battle is far from over.