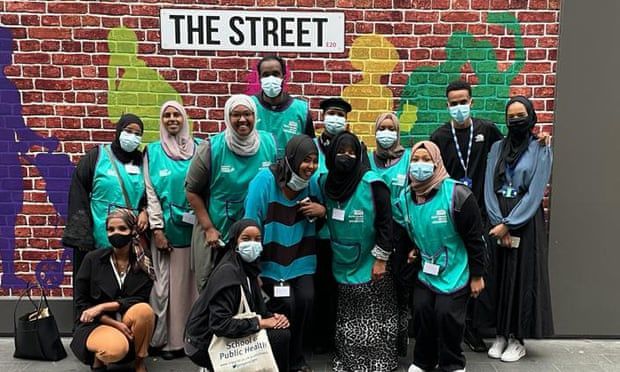 ‘We don’t want to tell people they are wrong’: the battle to win over Britain’s unvaccinated

For two months, one of the women attending Anab Hoffmann’s weekly drop-in sessions was very vocal in her opposition to vaccines of all kinds.

“She was one of the loudest,” Hoffmann said. “There’s always one. She was very loud. But we didn’t mind. That was her view. We don’t want to tell people they are wrong. We just want to give them the evidence.”

Hoffmann is the founder of Heal Together, a community interest company that focuses on helping London’s Somali community understand and access mental health support. They run a “Shaah and Sheeko” [tea and chat] group on Thursdays at various places in east London where people can talk about anything they are concerned about. Hoffman and her colleagues show people how to get help.

Since July, they have also been talking about vaccines – one of hundreds of “community champions” who are trying to persuade people to get the jab. People like the vocal anti-vaxxer at the Shaah and Sheeko.

“Week in, week out, she was very reluctant, but we saw her soften her tone.” They showed her videos of Somali doctors talking about vaccines, and information about the different vaccines and what they do.“We’re a small community,” said Hoffmann, who gave up her job in human resources for a major bank to start up Heal Together. “But we have unexplained levels of autism and some people believe the MMR vaccinations are responsible, which is untrue. But it has been a problem.

“Then a few weeks ago, we were doing outreach work outside a mosque and we saw her. She hugged all of us. I was perplexed, to say the least, because she had been so against it. But she said she had got the vaccine, and her sisters too.”

Even though everyone over 18 has been eligible for a free vaccine for at least six months, more than 60,000 adults received their first dose in the week up to 5 December, according to NHS figures.

In the London borough of Newham, where Heal Together is based, more than 220,000 first doses have been given out to over-18s, but there are between 268,000 and 350,000 adults in the area. The local authority has been funding 15 community groups including Heal Together and about 8,000 people have been vaccinated at pop-up clinics, like one Hoffmann ran in Stratford in June.

Jason Strelitz, director of public health in Newham, said there had been an increase in unvaccinated people coming forward since the emergence of the new, more infectious the Omicron variant. “We’ve been working a lot with very small community and voluntary organisations who have deep roots into different communities,” he said. “Breaking down trust barriers is important.” 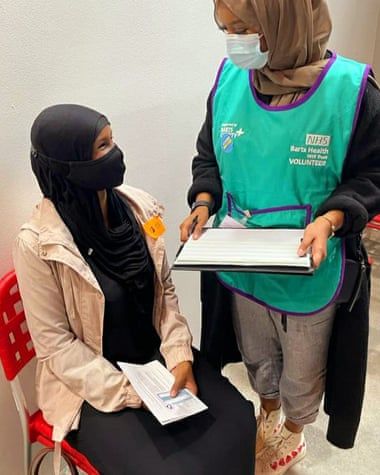 A woman receives her vaccination at a Heal Together centre.

Around 10% of people in their 40s are yet to have any vaccine against Covid-19, according to NHS figures, which leaves them vulnerable to serious illness if they become infected. More than a quarter of men aged between 18 and 24 are unvaccinated, nearly six months after they were first offered.

Since the government’s strategy of avoiding Covid restrictions relies on a herd immunity approach, these unvaccinated people represent a significant problem. When Boris Johnson announced plan B measures last week, he hinted that mandatory vaccinations might be an option, saying a “national conversation” was needed. Vaccines are already mandatory for care home workers – although a grace period has been extended into next year – and frontline NHS workers will be obliged to be double jabbed by April.

But the prospect of mandatory vaccines was “worrying”, according to Dr Pauline Paterson, co-director of the Vaccine Confidence Project at the London School of Hygiene and Tropical Medicine (LSHTM).

“We might need boosters every six months,” she said. “How many doses will be mandatory?” LSHTM researchers conducted a study of 17,000 people in April and discovered that although people who had been vaccinated liked the idea of vaccine passports, those who were already hesitant became more reluctant.

But confidence, or a lack of trust in the vaccines, or authorities, is only one reason why some people are unvaccinated, Paterson said. They may be complacent – particularly young people who believe they are not vulnerable to Covid, or there may be a lack of access.

“Maybe some people tried to log into the system and it wasn’t working. Or they didn’t know their NHS number, or the centre is too far away,” Paterson said. “Usually, by the time you have systems in place to make vaccines mandatory, you don’t need to, because generally the problem is about access.

“There’s an assumption we need to educate people, or tell them off, but actually we need to find out why people haven’t had a vaccine. The key is not to stigmatise and not to assume.”

Access remains a problem for some, including immune-suppressed people who need a third primary dose of the vaccine but say there is no way to book a vaccine appointment. They also face resistance from volunteers who do not always understand that they are eligible for a jab.

Even 15% of over-80s eligible for a booster dose have not yet had it, nearly three months after being invited. Changes to the way vaccines are now delivered may mean it is harder for some to access, according to Ruthe Isden, Age UK’s head of influence.

“In January, people were furloughed so they were more able to drop everything and take relatives to vaccine centres. In older age groups, people do face practical barriers. And for housebound people we do need wraparound support.”