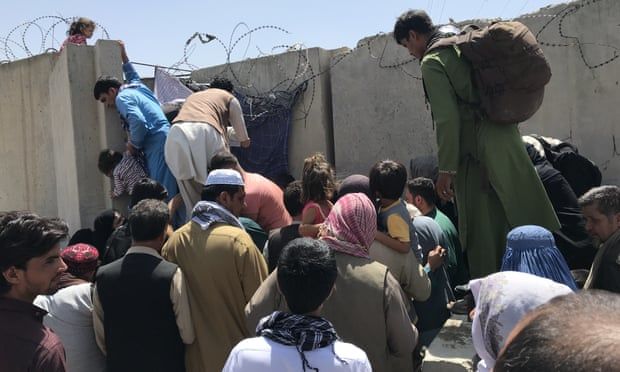 ‘Was it worth it?’: veterans of Afghan conflict reel at Taliban takeover

Former soldiers express anger and heartbreak as service in 20-year war rendered ‘pointless’
As chaotic scenes unfolded more than 4,000 miles away in Kabul, veterans of the 20-year conflict and families who lost loved ones on the battlefield have been asking the stark question: “Was it worth it?”

“There is a generation of Afghans who have been given a taste of what freedom is like, so you never know, but it feels pretty bleak at the moment,” said Andrew Fox, a former major in the Parachute Regiment who served on three tours of Afghanistan and who has spoken openly about the impact of PTSD on his own health.

“But as one of my friends said to me: it’s like the defining feature of our adult lives has turned out to be pointless. I think that’s where we all were … this week.

“On patrols we’d see the little girls and boys running around playing with their kites and they would talk to us and take a few sweets. They’re probably 16 or 17 now and the thought of those lovely little kids growing up to be adults who only knew a degree of freedom and suddenly being thrown back into oppression is heartbreaking.”

Watching images of the Taliban entering the Afghan capital after meeting little or no resistance, other veterans such as Ben McBean feel anger at how everything he and others had believed they were fighting for has been undone in a matter of weeks.

“Even some people who were quite positive have changed their mind after just watching them walk in with no kind of fightback,” said McBean, who lost a leg and an arm in a landmine blast in 2008 while serving with the Royal Marines in Afghanistan’s Helmand province.

“You can’t even look back and say ‘at least I was a part of that’ because there will be no legacy when everything is just being thrashed.”

Days after tweeting “All this for nothing! Fuming!” in response to the fall of Kabul, he told the Guardian he still felt the same, adding: “Let’s just say that girls could continue to be educated, then at least we could say we helped them, but now we’re hearing stories of young women having to burn their school IDs and certificates or having to become refugees.”

He also voiced concerns for fellow veterans, particularly those who struggled to come to terms with life-changing injures: “Someone like myself [can] look at it now and think ‘what a nightmare’ but someone else might hit the bottle again for example. There are also the parents who have lost children and who will be raging.”

Jack Cummings, a former Royal Marine engineer and bomb disposal expert, looked back 11 years after losing his legs in an explosion. He tweeted: “Was it worth it, probably not. Did I lose my legs for nothing, looks like it. Did my mates die in vain. Yep. On my 11th Bangaversary it’s a very sombre one. Many emotions going through my head, anger, betrayal sadness to name a few …”

Since the start of operations in October 2001, 457 British forces personnel or Ministry of Defence civilians have died.

A determination to hold on to the belief that their children had not given their lives in vain was characteristic of the reactions of bereaved parents such as Carolyn Hughes, whose son Cpl Danny Winter was a Royal Marine, and Sarah Adams, whose son James Prosser was a soldier in the 2nd Battalion the Royal Welsh. Both men died in 2009 in separate incidents.

“I just feel absolutely heartbroken for the Afghan people and my son, James, and all of the lives that have been lost,” Adams told BBC Radio Wales. “I have just got to try and think that James didn’t die in vain, or we didn’t lose so many lives in vain.”

Hughes wrote on her son’s Facebook memorial page: “Danny and all the armed forces of the country’s involved made a huge difference to a wild, war torn country. Because of them, terrorist attacks on our country [were] avoided and countless lives were saved. The women of Afghanistan were safe to walk the street and get an education, something that had always previously been denied.

“My son did not die in vain and my pride for him is etched on my heart forever.”
#Afghanistan  #Facebook
Add Comment