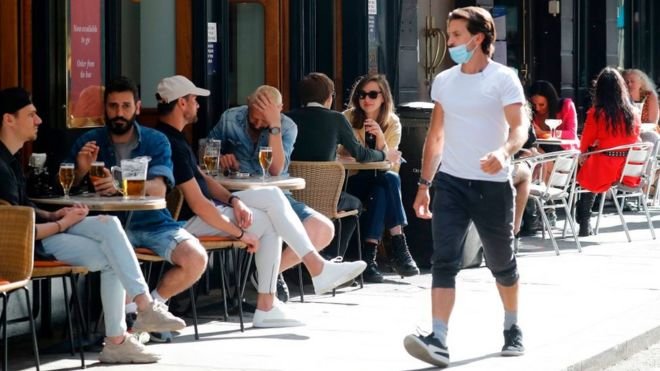 Virus cases 'may be levelling off' in England, figures suggest

The number of people in England testing positive for coronavirus may be levelling off, according to a household survey by the Office for National Statistics.

After a low in cases at the end of June, it estimated infections had risen slightly in July.

Restrictions have been introduced in Preston and kept in place in 18 other areas to control outbreaks.

The ONS figures are based on throat and nose swabs from nearly 120,000 people.

They are tested whether they have symptoms or not.

Individuals in hospitals and care homes are not included in the ONS survey, which has been estimating cases in private households since May.

Figures for Wales have been included for the first time - and during the week of 27 July to 2 August, 1,400 people are estimated to have had Covid-19.

However, there is uncertainty around these figures because they are based on modelling a sample of the population and a very small number of positive tests - just 53 people from 53 households over six weeks.

And the ONS says there is no clear evidence from its survey to say whether infection rates differ by region in England.

Local restrictions are currently in place in 18 areas in Greater Manchester, West Yorkshire and East Lancashire, plus Leicester.

Preston, in Lancashire, has now also been added to that list.

This means there are stricter rules on socialising for people living in these areas and for businesses, in order to control the spread of the virus.

Leicester was the first place in the UK to have a local lockdown introduced after a rise in Covid-19 cases. The city's pubs and restaurants are now preparing for their first weekend open in months.

At a national level, PHE says 4,605 cases of coronavirus were detected in the last week of July - similar to the week before.

Any sign of cases levelling off is welcome news.

The ONS can only say this "may" be happening because its trends are based on 53 people testing positive for the virus over a six week period. It is too small a number to be certain.

This set of data is from people who were tested between 27 July and 2 August. That means it is too soon to seen the effect of the greater restrictions imposed on parts of northern England, which came in late on 30 July, or Boris Johnson postponing the easing of lockdown planned for the start of August.

The latest data does not contradict UK chief medical advisor, Prof Chris Whitty, saying last week that we are "near the limit" of opening up society. And the Scientific Advisory Group for Emergencies (Sage) has warned that it "does not have confidence" that R is currently below 1 in England.

However, these are national pictures and what is most important is the data from where you live.

The ONS infection survey cannot pick out a Leicester and the R number cannot say Aberdeen is different to the rest of Scotland.

The latest R number for the UK was also published on Friday. It is now estimated to be between 0.8 and 1.0, suggesting coronavirus cases in the UK are either stable or shrinking slightly.

However SAGE, the government's scientific advisors, says it does "not have confidence that R is currently below 1 in England".

The number relates to how many people each infected person is passing the virus on to. Anything above 1.0 means cases are starting to grow again.

Prof Keith Neal, emeritus professor of the epidemiology of infectious diseases, at the University of Nottingham, said estimating R was becoming "increasingly difficult" because of the small number of cases around.

"A local cluster in one part of a region such as Leicester in the East Midlands can give a value over 1 overall for the region but the figure would be much lower in the rest of the region.

"These local clusters need to be identified and managed with locally targeted measures," he said.

"For many parts of the country, infection rates continue to fall but caution and avoidance of high risk mixing needs to continue."

Prof Neal added: "The best way the public can help control Covid-19 is to get tested if they have symptoms, and if positive, isolate and identify their contacts."