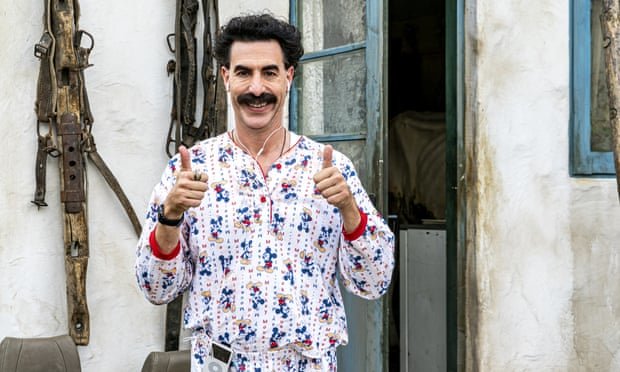 Kazakhstan, the home country of the fictional Borat Sagdiyev, has adopted the brash, moustachioed character’s catchphrase – “Very nice!” – for a new tourism campaign.

In the recently released Borat Subsequent Moviefilm, the fictional journalist depicts his homeland as misogynistic, homophobic and anti-Semitic –as he does in the original, Borat: Cultural Learnings of America for Make Benefit Glorious Nation of Kazakhstan. In the first iteration Borat, played by Sacha Baron Cohen, worried that he would be executed if the film wasn’t a success.

The first film’s version of the Kazakhstan national anthem begins with the words: “Kazakhstan greatest country in the world, all other countries run by little girls.” (The true anthem begins: “Sky of golden sun, steppe of golden seed”.)

Despite these less-than-flattering depictions, Kairat Sadvakassov, the deputy chairman of Kazakh Tourism, said in a statement to the Huffington Post that adopting Borat’s catchphrase in the campaign “offers the perfect description of Kazakhstan’s vast tourism potential in a short, memorable way.”

“Kazakhstan’s nature is very nice; its food is very nice; and its people, despite Borat’s jokes to the contrary, are some of the nicest in the world. We would like everyone to come experience Kazakhstan for themselves by visiting our country in 2021 and beyond, so that they can see that Borat’s homeland is nicer than they may have heard,” he said.

The idea for the campaign came from American Dennis Keen, who travelled to the country on a high school exchange, then studied with a Kazakh professor at Stanford University. He now lives in Almaty, where he gives walking tours, the New York Times reported.

With a lot of time on his hands due to the coronavirus pandemic, he and a friend pitched the idea to the Kazakh tourism board and “immediately” got the go-ahead to make four 12-second ads.

The response is a far cry from the nation’s reaction to the original Borat film. After its release in 2006, the Kazakh government placed ads in US newspapers disputing some of the film’s claims and presenting the country as modern, stable and outward-looking. The advertisements were timed with a visit from President Nursultan Nazabayev and featured a photograph of Nazabayev shaking hands with US president George W Bush.

Later that year Nazabayev laughed when asked about the film while on a visit to the UK. “The very fact that you have put that question – you will want to learn more and come to Kazakhstan to see for yourself,” he said.