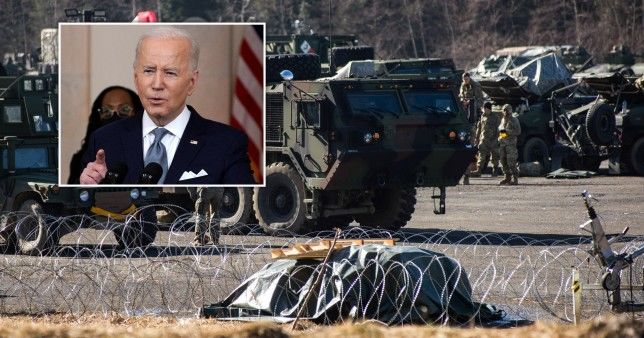 The US has joined its European allies in plans to sanction Russian President Vladimir Putin, and is sending more troops to support Nato, after US President Joe Biden spoke directly with Ukraine’s president.

President Joe Biden’s decision to sanction Putin personally as Russia continued into the second day of its full-scale invasion of Ukraine.

‘I expect we’ll have more specific details out later this afternoon.’


The US’s decision comes hours after the European Union and the UK announced they would introduce sanctions against Putin and and Russian Foreign Minister Sergei Lavrov.

Biden spoke with Ukrainian President Volodymyr Zelensky for roughly 40 minutes earlier on Friday. They spoke about tougher sanctions on Russia and the US providing more support, said Zelensky, who had pushed for punishing Putin.

‘Strengthening sanctions, concrete defense assistance and an anti-war coalition have just been discussed with @POTUS. Grateful to (United States) for the strong support to (Ukraine)!,’ he tweeted.

Zelensky had released a video lamenting that Ukraine was ‘left alone’ to fight Russia, and vowed to stay in Kyiv while it is under attack. He said he is Russia’s ‘No 1 target’.

Sanctioning Putin is largely symbolic, as he has hidden his wealth, making it hard to freeze his assets.

Psaki said that sanctioning him will ‘​send a clear message about the strength of the opposition to the actions by President Putin and the direction in his leadership of the Russian military’.

Biden previously said that sanctioning Putin was ‘on the table’. Asked what changed between the first and second day of Russia’s invasion, Psaki said ‘it has been under consideration and on the table for some time’.

‘The president’s view and strong principle from the beginning of this conflict, and even before, has been to take actions and steps in alignment with our European partners and this is certainly evidence of that,’ Psaki said.

On Friday, Biden also ordered the deployment of more troops to bolster US capabilities in Europe and support Nato, according to Sky News.

Biden on Thursday blocked exports of some products from the US to Russia, including semiconductor chips and other technology needed for military operations. He also imposed sanctions on four Russian banks, in addition to two financial institutions in the ‘first tranche’ of punishments. Biden has also worked with European allies to halt the Nord Stream 2 gas pipeline linking Germany and Russia.

Zelensky late Friday warned that Russia would try to storm Kyiv that night. Russian forces have been assaulting Ukraine’s capital with explosions and gunfire getting closer to the government quarter.