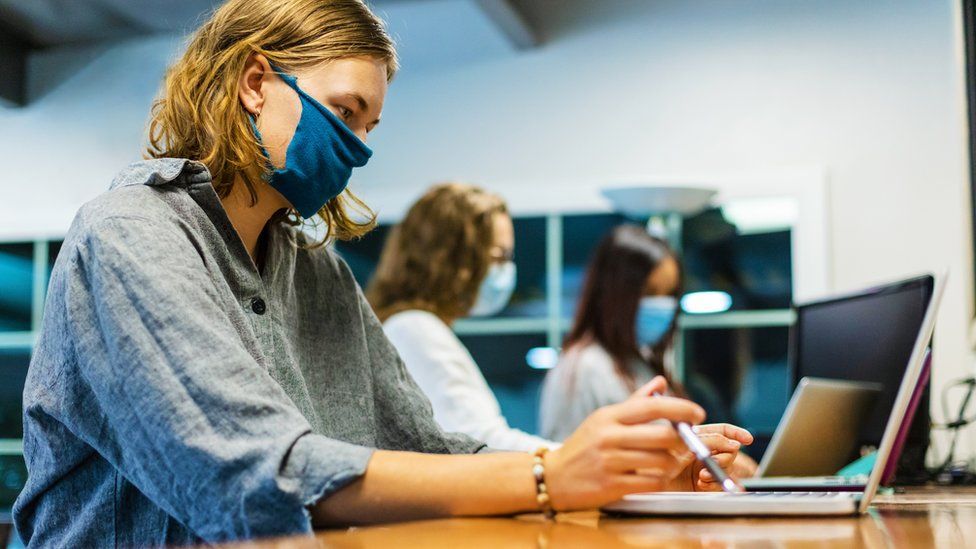 The Office of the Independent Adjudicator (OIA) has released a number of complaints students have made about the impact of Covid on their studies.

They include concerns over disrupted learning, accommodation and missed practical elements of courses.

The cases show the "complex situations" the pandemic brings, the OIA says.

The OIA is independent body that reviews student complaints about universities and other higher education providers in England and Wales under the Higher Education Act 2004.

Its complaints scheme is offered free to students.

In 2020, the OIA received 2,604 complaints, 500 of which related to the impact of the coronavirus pandemic.

Among the complainants was an international medical student who had been studying at an undisclosed university and paying course fees of £38,000.

The student was awarded £5,000 after the university stopped all clinical placements as a result of the coronavirus pandemic, meaning the individual had lost out on practical experience.

The OIA said it was awarded due to the "severe disappointment and inconvenience" the student had experienced because the final year of studies had been "less valuable" than expected.

A healthcare student has also been awarded £1,500 for the "inconvenience and significant disappointment" they faced due to the cancellation of a lab-based research project as part of their Master's degree course.

The student had been moved to remote learning by the university in the wake of the Covid-19 outbreak.

The student said this meant missing out on the practical techniques that employers looked for, disadvantaging them when applying for jobs.

The OIA concluded that while the institution had taken a "number of steps" to ensure students were not disadvantaged academically, it could not deliver the promised lab work.

Another student was given £200 after missing out on 14 hours of learning time because of industrial action that took place over November and December 2019, along with disruption caused by coronavirus.

And another case saw the lifting of an international student's accommodation penalty, imposed after they were found to be breaching social-distancing rules when a friend visited their room.

The student, who has a mental health condition, was excluded from the accommodation despite giving reasons for the friend's visit.

The OIA said it considered the penalty "harsh" and that the university had agreed to reduce the penalty to a formal warning.

But not all complaints were upheld by the adjudicator.

One student was not given a refund by the watchdog after paying university accommodation fees in three instalments before the first lockdown was enforced.

The student had asked to be refunded fees paid in March 2020 after the institution got in touch to say they should consider returning home.

The university had decided not to ask any students to pay the third instalment when it became due in April, but refused to refund the amount the student had paid for the six-week period before that.

The OIA ruled that the university had adopted a "fair approach" in a "very challenging" situation by giving the option for students to stay at the accommodation during the lockdown.

Two other students did not have their complaints over issues around teaching arrangements and exam-marking criteria upheld.

Independent adjudicator Felicity Mitchell said: "The case summaries reflect the hugely challenging and complex situations that students and providers have faced as a result of the pandemic.

"Where possible we try to reach a settlement, and we are pleased that in many cases providers and students have been very open to this.

"The summaries illustrate our approach to deciding what is fair and reasonable in these kinds of situations. We hope they will be helpful to providers and students."

The group Universities UK says students should "speak to their universities in the first instance" if they have a complaint.

A spokeswoman added: "Universities are developing plans to support students to have the fullest possible experience when they return to campuses. "

In February, England's Universities Minister Michelle Donelan announced an extra £50m for student hardship funds, on top of £20m agreed in December, in recognition of the disruption students have faced during the pandemic.

Her announcement came as the vice-chancellors of seven universities called for the interest on student loans in England to be scrapped for 15 months.