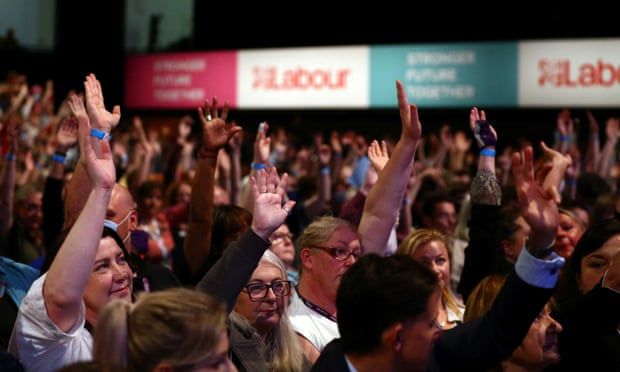 The motion, calling for the next Labour government to replace first past the post with a form of PR, was submitted by more than 150 constituency Labour parties (CLPs), and was the second most popular issue for the conference.

After an inconclusive show of hands in the conference hall in Brighton, a card vote showed just under 80% of CLP votes backing the motion. But the votes from affiliates – almost entirely comprising unions – were 95% opposed. The eventual result was nearly 58% against.

Laura Parker from Labour for a New Democracy, which backed the motion, said the vote showed that party members were overwhelmingly in support of proportional representation, and that Keir Starmer should have shown more support for the idea.

She said: “Rank-and-file trade unionists play a key role in our campaign, but despite this most unions do not yet back reform. The truth is, if the leadership had engaged with this unifying policy as intensively as they pushed their own proposed rule changes, PR would now be Labour policy.”

During a debate on the main conference stage, a series of local delegates backed the motion, with one saying first past the post was creating a generation of apathetic young people.

“I see so few of my friends, of my generation, engaged in political activity, even if they’re passionate about the issues. So many never show up to vote,” one said. “We need to ensure that every voter, not just those in swing seats, feels heard.”

The only speaker against the idea was Margaret Clarke, of the GMB union, who called the motion an “attempt to commit the Labour party to an unnecessary distraction in backing proportional representation”.

She said of PR: “It’s unpopular. Voters rejected it overwhelmingly in a referendum in 2011. It’s less accountable, breaking the vital constituency links between hundreds of Labour MPs and their voters across the UK. It also risks handing power to the far right in our parliament.”

But other speakers pointed out that the 2011 referendum on a change to the voting system, run as part of the Liberal Democrats’ requirements to join a coalition with the Conservatives, was about the alternative vote system, which is not proportional.

The motion argued that first past the post created “electoral deserts” and “widespread disenfranchisement, disillusion and disengagement in politics”.

It said: “A voting system in which every vote counts equally is needed to address the worrying levels of alienation, division and mistrust in British politics. Labour in government played a leading role in introducing forms of PR to the UK’s devolved government.

“There are systems of PR that retain a strong constituency link between MPs and their electorates, while ensuring that all votes count equally and seats match votes.”
Add Comment