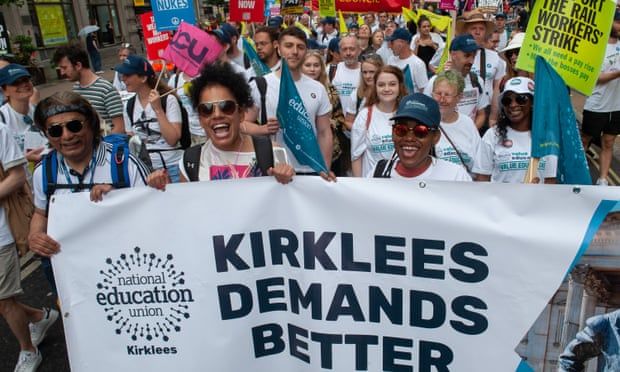 Move could see synchronised strikes in autumn as new prime minister takes office
Britain is facing a wave of coordinated industrial action by striking unions this autumn in protest at the escalating cost of living crisis, the Observer can reveal.

A series of motions tabled by the country’s biggest unions ahead of the TUC congress next month demand that they work closely together to maximise their impact and “win” the fight for inflation-related pay rises.

The move, which includes the two biggest unions, Unison and Unite, comes amid growing anger at the government’s failure to agree a detailed package of help for families following Friday’s announcement that average gas and electricity bills are to rise by 80%.

While coordinated action would be short of a “general strike” floated by some union leaders, Unite’s motion would give the TUC the task of ensuring that walkouts are synchronised or deliberately staggered to deliver the greatest impact.

Backed by the rail union RMT – which has led its members in a series of strikes in recent weeks – and the Communication Workers Union, which took action on Friday, Unite calls on the TUC to “facilitate and encourage industrial coordination between unions so workers in dispute can most effectively harness their union power to win”.

Another motion from Unison, the country’s biggest union, says the cost of living crisis is a “low pay crisis” and also demands that the TUC coordinate union action to campaign for pay rises “at least in line with inflation” – now 10.1% – as well as for a £15 per hour minimum wage.

The signs of unrest underline the scale of the problem now facing the next Conservative prime minister, Liz Truss or Rishi Sunak, as soaring energy costs drive inflation further upwards. Union militancy will also place Keir Starmer, the Labour leader, in a difficult position. He recently called for his frontbenchers not to support the rail strikes.

Starmer, whose party receives much of its funding from unions, is due to make his first speech in person as leader to the TUC Congress which opens in Brighton on 11 September.

Unite general secretary Sharon Graham, whose 1,900 dockworker members at Felixstowe, the country’s biggest port, are on an eight-day stoppage, cited the example of the ongoing rail dispute, which, she said, it was “critical” that the RMT won.

“If we were going on strike on the buses, why wouldn’t we coordinate the two things?” she told the Observer. “You want to make sure we give as much support as possible. Now, that’s the role of the TUC to see you do that.”

Graham made it clear she was not talking about unlawful secondary action – one union not in dispute supporting another which is – but instead of coordination between unions whose members have voted to strike in separate pay disputes.

Within her own multi-sector union, she said, Felixstowe and Liverpool docks, both with mandates for industrial action over separate pay claims, could well be on strike at the same time. “If it helps them both to be on strike together, why wouldn’t you?”

Ministers will be alarmed at the extent of potential strike action reflected in the TUC motions.

In response to government plans to cut 91,000 civil service jobs, the First Division Association, representing senior civil servants, is calling on the next prime minister to abandon the “destructive approach of arbitrary job cuts”, while the Public and Commercial Services Union calls on the TUC to “support industrial action aimed at preventing job cuts and coordinate such action with other unions in dispute where possible.”

With unrest spreading, the GMB union is set to ballot more than 50,000 school support staff on whether to accept a £1,925 pay rise offered by local government employers. The GMB is also balloting more than 100,000 local government workers over their pay deal, while the Royal College of Nursing is preparing to consult its members on whether they would be prepared to take strike action.

Senior government sources said that Truss, the likely winner of the Conservative leadership contest, would be ready to hold an emergency budget with measures to help people with energy costs “very soon” after the winner is announced on 5 September.

While Truss has said on the campaign trail that her priority is to deliver tax cuts and not “handouts”, in recent days she has also made clear that she will help those most in need – without specifying what that would involve.

George Eustice, the environment secretary, said yesterday that people “don’t have long to wait”, but added that both Truss and Sunak would “want to look at all of the options, properly costed”.
Add Comment