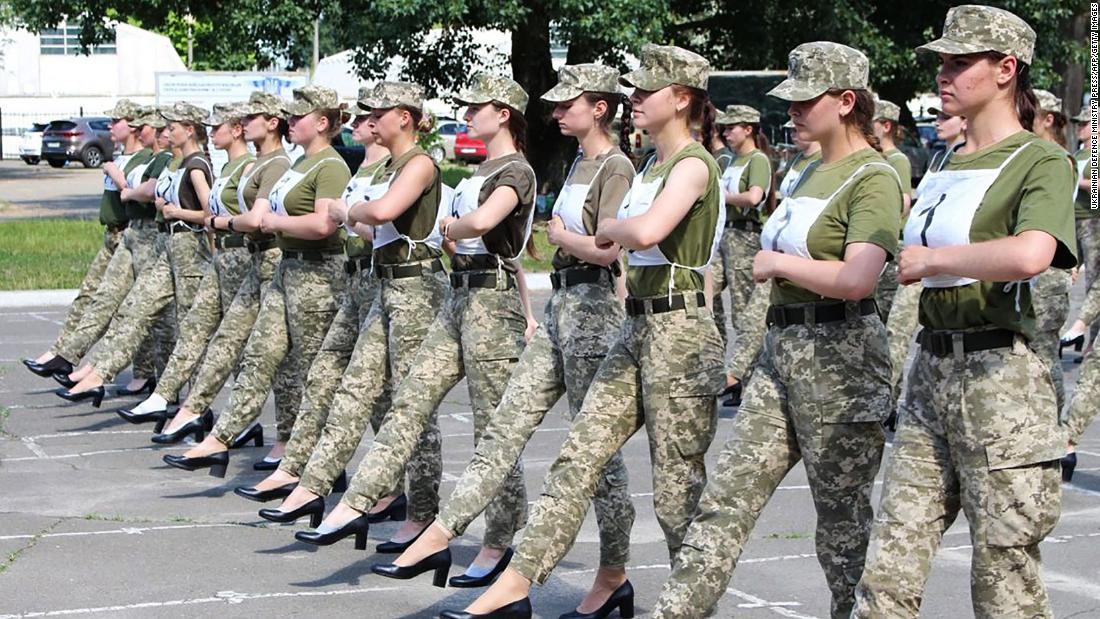 Ukrainian army is training female soldiers to march in heels

Ukraine's Ministry of Defense has defended its decision to train female soldiers to march in high heels, following an outcry from local lawmakers.
Women from the Ukrainian armed forces will march in a parade to mark the 30th anniversary of independence from the Soviet Union on August 24, according to a statement from Army Inform, the defense ministry's official news agency, published Thursday.

They have been training twice a day to master the steps and are progressing well, Major Eugene Balabushka told Army Inform. Balabushka confirmed the plan to wear high heels during the parade.

Ivanna Medvid, a cadet at the Military Institute of the Taras Shevchenko National University of Kiev, has been training for more than a month. "Today, for the first time, training takes place in high-heeled shoes," she told Army Inform. "It's a little harder than in boots, but we try."

However, the decision to march in high heels angered a number of lawmakers after local media picked up images published by the defense ministry.

"Shoes with heels are incompatible with the combat capability of soldiers, and a 'Prussian' step on a parade in such shoes is a deliberate harm to the health of soldiers," reads the statement, posted on Stefanishina's Facebook page on Friday.

There are 57,000 women serving in the Ukrainian armed forces, according to the post, and the country is introducing NATO standards, under which the principle of equality of rights and obligations of servicemen, regardless of gender, applies unconditionally.

In response to the criticism, the defense ministry uploaded a series of pictures to Facebook of female soldiers from other armies wearing high heels.

But Stefanishina and the cosignatories of her statement pointed out that while the armies of some NATO member countries issue high heels to women as part of their dress uniform, they are not worn while marching in parades.

The officials called on the ministry to replace the high-heeled shoes, appoint a gender adviser and carry out a survey of women in the security and defense sector to find out how they feel about working conditions, including their uniforms.
#Facebook
Add Comment