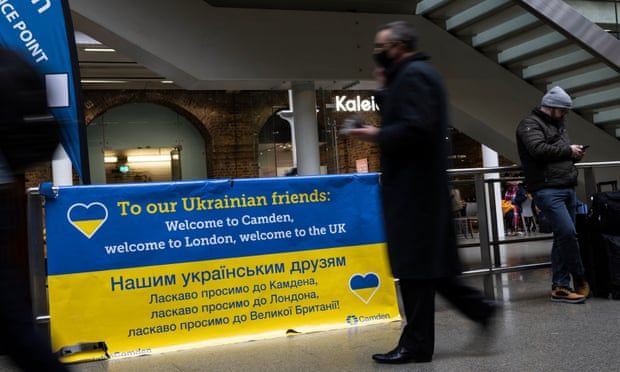 Ukraine refugees who enter UK via Ireland may be sent to Rwanda, MPs told

Minister also refuses to say whether Ukrainians who cross Channel in small boats could be sent to Africa
Undocumented people who travel from Ukraine to the UK via Ireland could be considered for removal to Rwanda, a senior Home Office official has told MPs.

During the same select committee hearing, a minister refused to say under repeated questioning whether Ukrainians who arrive in the UK across the Channel by boat could also be sent to the central African country.

The exchanges occurred at the home affairs select committee where the minister, Tom Pursglove, was unable to point to any calculations that the government’s relocation policy would reduce the number of people arriving in the UK in small boats.

Some Conservative MPs have criticised Ireland’s decision to lift all restrictions for refugees fleeing war, claiming it would create a back door to the UK, leaving the country vulnerable to potential criminal elements.

It has been pointed out that the common travel area means that Ukrainians who do not pass British security checks or are left waiting for visas to arrive could simply reach the UK by travelling to Northern Ireland from the Irish Republic and then getting a ferry to the UK.

Stuart C McDonald, the SNP’s home affairs spokesperson and a committee member, asked Dan Hobbs, the director of asylum, protection and enforcement, about Ukrainians crossing into Northern Ireland from Ireland. “Are they within the scope of this policy or are they not?” he said.

Hobbs replied: “Depending on the individual circumstances they may not fall in the ‘inadmissibility’ criteria.”

McDonald said: “You are leaving open the possibility that you can cross from Dublin to Belfast and conceivably end up in Rwanda.”

Earlier, Diana Johnson, the chair of the committee, asked Pursglove if Ukrainians who travelled to the UK by small boat would be ruled “inadmissible” and therefore could be removed.

Pursglove, the minister for justice and tackling illegal migration, replied: “There is absolutely no reason why any Ukrainian should be getting into a small boat and paying a people smuggler to get into the UK.”

When asked what modelling was used to give the “evidence base for this decision”, the minister replied: “This is a new and untested policy at this point in time. I do think that in the fullness of time we will see this policy, as part of a wider package that we are introducing, really shift the dynamic.”

Johnson said that it sounded like modelling had not been carried out. Pursglove replied: “I would be delighted to hear an alternative.”

The two safe and legal routes under which Ukrainian refugees can enter the UK – the Ukraine family scheme and the Homes for Ukraine scheme – have been beset by delays. The latest government data shows that 37,400 of 125,100 applicants have so far arrived in Britain.

Under the scheme announced last month by the home secretary, Priti Patel, the UK will pay for people seeking asylum who are deemed to have arrived “illegally” to be sent to Rwanda, where their claims will be processed.

In theory, they will be granted asylum or given refugee status in the country. Boris Johnson said “tens of thousands” of unlawful migrants would be removed to Rwanda.

Documents released by the government on Monday show that the Rwandan government has managed to process a maximum of 307 asylum cases in a single year since 2016.

Joanna Cherry, attending the session from the joint committee on human rights, asked Pursglove if he accepted reports by the US state department, Amnesty International and Human Rights Watch documenting “unlawful or arbitrary killings”, along with forced disappearances and torture by the Rwandan government.

Pursglove said that “overall Rwanda is a safe and secure country” to use for resettlement, arguing that there were “no systematic breaches” of human rights obligations in the east African country.

The government announced on Monday that the process of removing people to Rwanda would begin over the next few weeks.

Responding to the hearing, Enver Solomon, the chief executive of the Refugee Council, said: “This government has now openly acknowledged it is intent on treating any person fleeing war or oppression from around the world as a commodity to be shipped to Rwanda. This includes those fleeing the deadly conflicts in Ukraine and Afghanistan right now. It is appallingly cruel and will cause great human suffering.