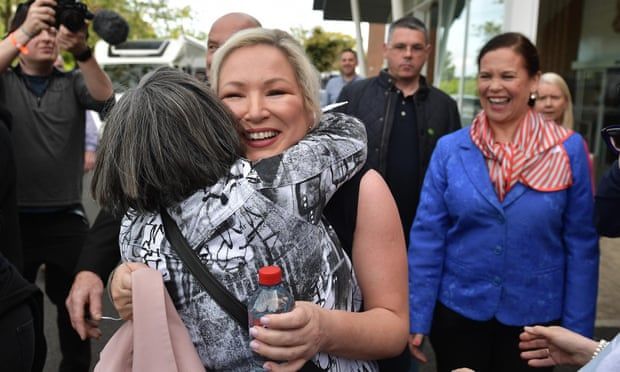 UK will do ‘whatever necessary’ to reform Northern Ireland Brexit protocol, says minister

Raab warns stability in Northern Ireland is being ‘imperilled’ by dispute over protocol agreed by Johnson
The UK government will take “whatever measures are necessary” to reform Northern Ireland’s Brexit protocol, the justice secretary, Dominic Raab, has pledged, amid fears the newly elected Stormont assembly could be put on pause until Christmas.

At the same time, the Northern Ireland secretary, Brandon Lewis, has ruled out any imminent prospect of a referendum on a united Ireland.

After a resounding election victory for Sinn Féin, the DUP has said it cannot take up its position as deputy first minister until Brexit checks on goods entering Northern Ireland from Great Britain are removed.

Raab told Sky News on Sunday: “If anything, the outcome in Northern Ireland from those elections makes it clear it [a protocol fix] can’t be put off.”

He suggested it would be dealt with in the coming “weeks and months”, warning that stability in Northern Ireland was being “imperilled” by the dispute over the protocol – which was agreed by Boris Johnson’s government as part of the Brexit divorce from the EU in 2019.

Lewis told the BBC’s Sunday Politics Northern Ireland programme the election results were “significant”, but pointed out that the three unionist parties still have more seats than nationalists.

London’s threat to take action will increase tensions between Westminster and Brussels over the protocol, with the UK saying all options remain on the table – including the possibility of unilaterally scrapping elements of the deal.

That could trigger a breakdown in relations between the UK and Europeanthe EU with Brussels previously threatening a trade war if such unilateral action was taken.

The war in Ukraine has switched the political focus across Europe and while talks between UK and European Commission officials have been under way since last October the momentum has stalled.

Lewis last week indicated that the UK would not take immediate legal action over the protocol, saying the UK preferred to resolve the issue through negotiation.

Sinn Féin’s historic victory in Northern Ireland has resulted in it overtaking the DUP as the largest party in the region for the first time since Northern Ireland was formed more than 100 years ago.

Under a complicated post-conflict power-sharing system, it is entitled to nominate the first minister in the Stormont executive, or cabinet, but that position can be taken up only if the largest party of the unionist side also nominates a deputy first minister.

After the counts were completed close to midnight on Saturday night, the party, which supports a united Ireland, had clinched 27 seats – three more than the DUP.

However, the unionists’ combined number of seats still outnumbers Sinn Féin’s when the nine seats won by the albeit diminished Ulster Unionist party are taken into account.

Overnight, leading members of the British, Irish and US governments urged all sides to respect the democratic will of the people and form the devolved government.

Lewis said the “people of Northern Ireland deserve a stable and accountable local government” and that he would be meeting all parties in the coming days.

But he too hinted at a move on the protocol, saying: “The electorate delivered a number of messages … they were clear that they want a fully functioning devolved government in Northern Ireland” but also “want the issues around the protocol addressed”.

The taoiseach, Micheál Martin, said it was “incumbent on all political parties” to deliver their mandate and nominate a first and deputy first minister to enable a fully functioning executive.

In the US, congressman Richie Neal, who chairs a powerful committee that would have the final say over a potential UK trade deal, urged all sides to make continuing stability in Northern Ireland a priority.

“Now is not the time for hard lines that will diminish this great progress, and any form of triumphalism should be resisted. The preservation of peace and stability remain paramount regardless of the outcome of these elections,” he said in a statement.
#Boris Johnson  #Dominic Raab  #Johnson  #Raab
Add Comment