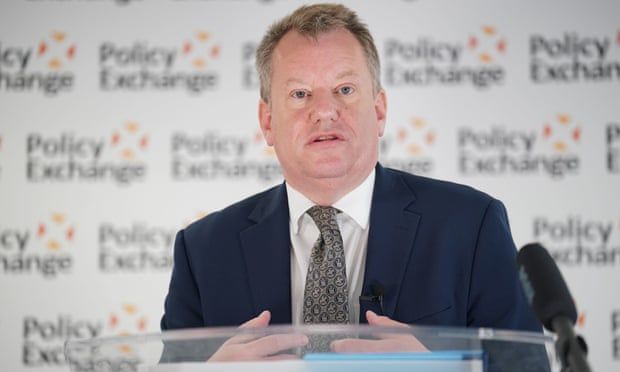 UK should not fear EU trade war, says Frost as he backs ripping up protocol

In a provocative newspaper column, he said the UK “cannot be defeated” by Brussels and needed to “make sure it is ready” for the consequences of a unilateral move to scrap parts of the Northern Ireland protocol.

The foreign secretary, Liz Truss, is expected to announce plans for legislation next week to disapply some of the protocol in a risky move that could result in sanctions or even the suspension of the trade deal that Lord Frost negotiated in December 2020.

Writing in the Daily Telegraph about the potential move, Frost said: “We may, of course, face EU retaliation, although it would be disproportionate to the trade involved, only arguably legal and entirely self-defeating. I am not convinced every EU member’s heart would be in it either. Logic may yet prevail. But if it does happen, it will complicate things, but we should not fear it.”

Adding to tensions with Europe, Jacob Rees-Mogg claimed on Friday the EU “wants to make the UK feel bad about having left the European Union”. But the Brexit opportunities minister told GB News he doubted the EU would retaliate with something as severe as a trade war if the UK were to remove parts of the protocol, saying it would be a “pretty silly” thing to do.

He questioned whether Brussels would even have the support of all member states. “The European Union would need unanimity and it seems to me that’s a pretty high bar to get,” he told GB News on Friday.

He also argued that the EU would be punishing its own voters by starting a trade war at a time of rising inflation and the cost of living crisis. “Do they really want to make prices even higher for their consumers and their voters? I think that’s an interesting and important question.”

“The EU … may decide it wants an act of self-harm – that is not under our control – but it would be a pretty silly thing to do,” he added.

Truss has argued that she would have no option but to act if the EU did not concede to the UK’s demands to scrap the checks on goods crossing from Great Britain to Northern Ireland. It is a high-stakes move that is testing relations with EU leaders, but is also timed to exploit the lack of appetite in Europe for a trade war with a former ally at a time when political focus is on Russia and the expansion of Nato.

In an interview with GB News on Friday, Frost said he hoped the US delegation would see for themselves the issues the protocol was creating when they arrived in the coming days.

“I think it’s good that if if a team is coming across here to the UK to see what is happening, then they will see very quickly the problems,” he said. “I do think the administration should be careful in intervening on a question that involves the unity of a country, of a very close ally and friend, and I would hope that they would be.”

Earlier this week Frost told the US president, Joe Biden, who has invested much of his career in supporting peace in Northern Ireland, to keep out of UK business.

“I get slightly frustrated when we are told by a third party, albeit a very important one in this context, how to manage these issues,” he told a thinktank in the US. “It is our country that faced terrorism, faced the Troubles. I am old enough to remember having to check under my car every morning, as a diplomat, before I went to work. Most people were very affected in one way or another by this.”

His remarks come as a delegation of influential US Congress representatives, including the head of the ways and means committee, Richard Neal, plan to fly to London amid growing concern in the White House about spiralling tensions over the Northern Ireland protocol.
#Joe Biden
Add Comment