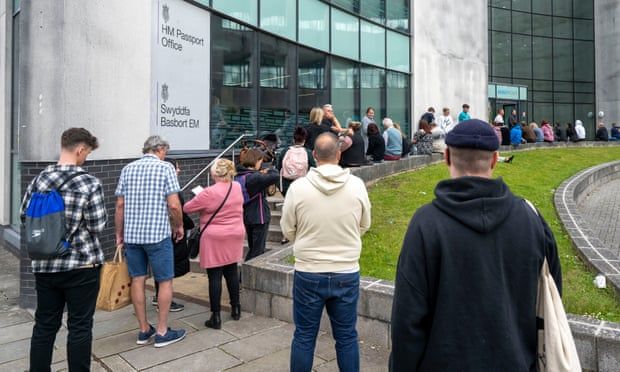 Processing times remain lengthy, despite ministers pledging 700 more staff to deal with backlog
Families are suffering a nailbiting, up-to-the wire wait this weekend as they face the prospect of having to cancel their half-term holiday plans as ongoing Passport Office delays put trips abroad at risk.

The summer half-term break starts on Monday for much of the UK but a backlog of passport applications has caused months of delays, with some people now set to miss their holiday bookings.

The Passport Office’s most recent advice is to allow 10 weeks to process forms because of a surge in applications after lockdown restrictions were lifted – but many people are still waiting for passports they ordered when the estimated processing period was much shorter.

Thomas Singlehurst, 44, from west London, applied on 8 April for new passports for sons Rex, 15, and Bron, 9, when the estimated processing time was five weeks.

Their half-term trip to France is now in jeopardy.

His younger son’s passport was sent within a month but his eldest son’s was only printed on Friday, with no chance of it arriving for their flight this weekend .

He said the Passport Office had been “impossible to get hold of”. “I would get the train up to Durham to pick it up but it is impossible to contact them,” he said.

“Before, it was 50:50 if you could go on holiday because of Covid tests. Now it’s because you might not have your passport.”

One company director applied for her daughter’s passport renewal on 24 March but now expects to miss the family’s flights to Italy’s Amalfi coast on Monday. The family, from Kent, have already had to abandon plans for the trip over the Easter break because of the passport delay. If they are forced to cancel for a second time, it will leave them, in total, £5,000 out of pocket.

“It beggars belief that they can operate like this,” said the woman, who is hoping to travel with her daughters, aged eight and nine..

“It is the not knowing that’s the most frustrating part of this. Obviously, I want to go on holiday but it is better to know if you’re not going to get a passport.

“This is the first holiday we have had since Covid – to add insult to injury – and it is just such a shame. It’s not fair to leave one daughter and take the other. The kids are incredibly disappointed but it is out of our hands.”

Keir Starmer highlighted the backlog issue at prime minister’s questions on Wednesday, saying there are 500,000 passports waiting to be issued. “That’s potentially half a million people worrying whether they will get away this summer,” he told the House of Commons.

In response, Boris Johnson insisted that the government was “massively increasing the speed with which the Passport Office deliver”, saying “to the best of my knowledge” everyone is getting their passports within four to six weeks.

The Passport Office said that 5 million people delayed their applications due to the pandemic, leading to the delay of around 10 weeks. However, it said that passports are being received within six weeks in 90% of cases, and it is still in the process of hiring the 700 new staff members it pledged to recruit in April.

A Passport Office spokesperson said: “Since April 2021, we’ve clearly stated that people should allow up to 10 weeks when applying for their passport to factor in the increased demand, which has seen 5 million people delay their passport application due to the pandemic.

“The latest figures show that 90% were completed within six weeks. But we cannot compromise security checks, and people should apply with plenty of time prior to travelling.”
#Boris Johnson  #Johnson  #Covid
Add Comment