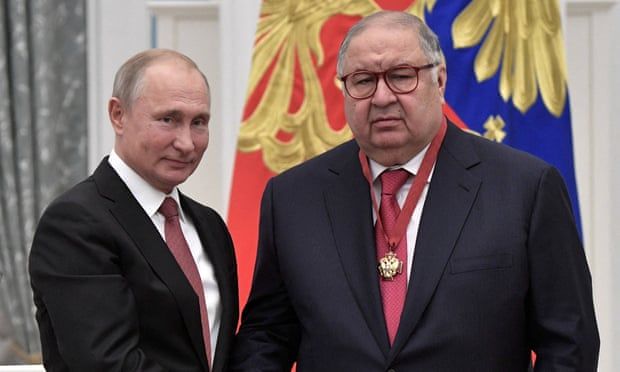 Liz Truss announces moves against Everton-linked Alisher Usmanov and Igor Shuvalov
The UK has sanctioned two new billionaire allies of Vladimir Putin, amid growing pressure to speed up the crackdown on Russian oligarchs, with delays blamed on legal issues and poor preparation.

Amid widespread criticism of the delays to sanctioning more Kremlin allies, the Guardian understands ministers are set to reform “intimidation lawsuits” to crackdown on multimillion legal bills from oligarchs.

The oligarchs Alisher Usmanov and Igor Shuvalov were added to the UK sanctions list on Thursday night, a week after it was announced there would be a “hitlist” of more than 100 oligarchs. Both will be cut off from their multimillion pound British mansions, with a full asset freeze and travel ban.

The telecoms magnate Usmanov owns the £48m palatial Beechwood House in Highgate and the 16th-century Sutton Place estate in Surrey, and has had significant interests in the English football clubs Arsenal and Everton. Shuvalov, the former deputy Russian PM, has assets including two luxury apartments in central London worth an estimated £11m. Both have been sanctioned by the EU.

In a coordinated move the US government announced “full blocking sanctions” on eight “Russian elites and their family members who enable Putin”. Those sanctioned include Usmanov and Shuvalov as well as Nikolai Tokarev, chief executive of the energy company Transneft, Dmitry Peskov, Putin’s press spokesperson, and Yevgeniy Prigozhin, a wealthy businessman nicknamed “Putin’s chef”.

Whitehall insiders have warned that legal change is needed or the government’s full list could take as long as six months and blamed a lack of preparatory work in the run-up to Russia’s invasion of Ukraine.

Liz Truss, the foreign secretary, announced plans to establish a cross-government oligarch taskforce to help build cases against its targets.

Government sources blamed the slow pace on amendments to the 2018 sanctions law, but the crossbench peer Lord Pannick who proposed the changes said they should not mean the UK must act slower than the EU, which has named significantly more individuals linked to Putin.

The Guardian also understands the government is preparing to toughen up the long-delayed economic crime bill after pressure from Labour – including cutting the implementation period from 18 months to six for a new register revealing the ultimate owners of UK properties. Labour had called for a cut to 28 days.

Government sources said Truss was pursuing changes to limit the amount of damages that could be incurred should those who have their assets frozen and seized for close ties to Putin’s regime challenge them in the courts.

Truss has told government lawyers to “find literally any way” to crack down on so-called Slapp suits – the Strategic Lawsuit Against Public Participation technique – often used by the litigious and mega-wealthy to censor and intimidate journalists and activists by burdening them with huge legal costs they cannot meet.

The justice secretary, Dominic Raab, is expected to launch a call for evidence on reforming Slapp cases, but it could take several weeks.

Vladimir Ashurkov, a Russian political activist who was executive director of the Anti-Corruption Foundation, said such lawsuits were “acts of hybrid warfare which are used to weaken the UK’s democracy, judicial system and fundamental freedoms”.

Meanwhile, there is widespread internal frustration that preparatory work for legal cases against a number of individual oligarchs has only just now begun, after months of warning about a Russian invasion.

“It’s a big cross-Whitehall process between the Home Office and the Foreign Office – which should have started months ago – and it’s exposing the system’s weaknesses,” one Whitehall source said. “HMG is weeks behind where it should be.”

The source emphatically denied it was a lack of political will and said senior cabinet ministers had been repeatedly raising the issue and asking questions about why the UK appeared behind.

Two government sources said that the speed of the UK’s response had been hampered by the Sanctions Act of 2018, passed after Brexit, which makes the procedure legally cumbersome, with overstretched government lawyers now facing a vast caseload.

They blamed extra protections brought in after amendments were proposed by Pannick and Lord Judge, the former lord chief justice of England and Wales.

Pannick, who has previously represented a Russian individual challenging EU sanctions, said the changes should not mean the UK moved slower than the EU.

“The sanctions regime rightly requires ministers to satisfy themselves that the proposed sanctions are ‘appropriate’ in the circumstances of the individual case, and to give reasons for a sanctions order. Any lesser test would be impossible to justify under the rule of law,” he said.

“I cannot understand the government’s position. I cannot understand why these conditions should impede sanctions if there is a case for imposing them against an individual. Indeed, under EU law the same basic requirements apply.”

“The EU can do it, and the EU moves more slowly than our brand new nimble system is supposed to. Our post-Brexit landscape isn’t a whole lot different than our pre-Brexit sanctions landscape. As far as how it works, it’s more or less the same.”

Separately, Boris Johnson has also given his backing to the levelling up secretary, Michael Gove, who is understood to be considering plans to toughen up the government’s powers so that sanctioned oligarchs’ properties could be seized without compensation – rather than just frozen.

One government aide said that requisitioning individuals’ property “jars” with the UK’s tradition of upholding the rule of law, and offering security to investors – though they denied there was any dissent within government about pressing ahead. “We are going full tonto on this, within the parameters of the rule of law,” the aide said.
#Boris Johnson  #Dominic Raab  #Johnson  #Raab
Add Comment