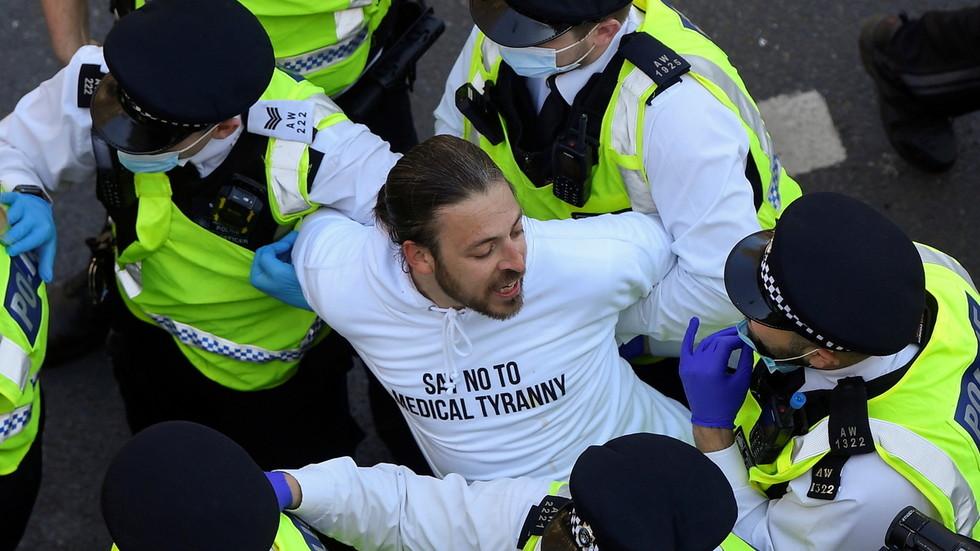 UK citizens are prepared for a “great British summer” due to the progress of the UK’s vaccination program. However, quietly-published government contracts reveal the promised roadmap out of lockdown could in fact be a red herring.

On April 26, the UK government published a tender in search of 60 new “covid marshals” in the district of Hertfordshire. The contract, offered to “public security, law and order [and] compulsory social security services” providers, is set to run July 2021-January 2022, and cost £3 million.

Marshals were introduced in October 2020 to help businesses manage queues, ensure adherence with social distancing measures, remind people to wear face coverings where necessary, and regularly clean frequently-touched surfaces. As Britain’s state broadcaster has acknowledged, though, they don’t actually have any legal mandate to enforce rules. Officials merely “hoped” they’d make life at least slightly easier for those authorities – such as police – actually invested with such powers.

According to the new tender, these individuals are expected – using “an intelligence led approach” – to “provide practical support to aid and encourage compliance,” help “introduce measures to aid public and business awareness and understanding of regulations and guidance,” and disseminate Covid-19 guidance, “including where additional local restrictions are in place.”

While the job description sounds like something to expect in the Covid-era, the timing may raise quite a few eyebrows. According to Whitehall’s official roadmap, due to the “success” of London’s national vaccination program, “no earlier than 21 June, the government hopes to be in a position to remove all legal limits on social contact.”

In March, Health Secretary Matt Hancock was reportedly “more optimistic than ever” of a “great British summer” imminently impending. Not long after, Transport Secretary Grant Shapps said with much fanfare that “for the first time, people can start to think about visiting loved ones abroad, or perhaps a summer holiday.” Where Britons could head to, what encumbrances on their liberty they would face upon returning, and how much restrictions – such as PCR tests – would add to their trip bill was unstated.

That a “great British summer” wasn’t on the cards, contrary to official pronouncements, was in any event hinted in mid-April, when the Association of Independent Festivals – which represents approximately 40 percent of the country’s festival calendar – revealed over 90% of its members were unable to convene events in 2021 without state-backed insurance, which remains unforthcoming.

However, a document stating that Covid marshals will be required to “encourage compliance” among members of the public until the start of next year at least appears to be the first black-and-white confirmation, coming directly from the UK government. The tender strongly implies what ministers have so far been unwilling to concede – the global pandemic isn’t anywhere near over yet, resultant lockdowns are likely, and citizens’ lives will continue to be adversely affected far beyond the foreseeable future.

An even longer period of uncertainty is even more heavily insinuated by a separate tender for a “COVID Public Information Campaign” in Northern Ireland, which calls for “an advertising contractor to build on and continue to deliver a multimedia advertising campaign on COVID-19.” Published not long after Hancock’s munificent prophecy, the contract is set to run for two years from April 2021, and cost £2 million.

Residents of the UK should by this point be thoroughly accustomed to optimistic ministerial forecasts in respect of Covid leading only to disappointment. When the country first entered lockdown in March 2020, Johnson pledged it would last just three weeks.

That period of confinement eventually ended four months later, and the Prime Minister unveiled plans to return the country to “normal” by Christmas. A four-week lockdown was “temporarily” reimposed in November, rules were relaxed for Yuletide then partially reimposed, before a full lockdown was again applied in January.

Johnson has since alleged that lockdowns, not vaccines, are the key driving force behind the country’s much-reduced Covid casualties and caseload, and “the majority of scientific opinion” remains “firmly” of the view “there will be another wave of Covid at some stage this year.” Evidently, now is very much not the time to be booking holidays, or expecting “normality” – whatever that means by this point – to come flooding back anytime soon.