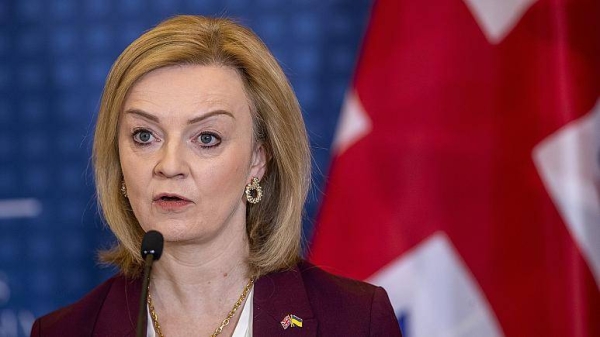 UK Foreign Secretary Liz Truss is visiting Sarajevo on Thursday in a bid to reaffirm her country's commitment to peace and stability in Bosnia amid growing fears of malign influence from Russia in the small Balkan country of about 3 million.
During her one-day trip, Truss will meet with top Bosnian officials and announce plans to deepen "security and economic partnership with [the country] in the face of secessionists and Russian attempts to influence and destabilise" it, the UK Foreign Office said in a statement.

Truss will also address Bosnia's multi-ethnic armed forces to urge support for Ukraine with a message that "Russia's aggression cannot be appeased. It must be met with strength," it added.

The country condemned Russia's invasion of Ukraine at the UN but failed to agree on imposing sanctions against the Kremlin because of opposition from Bosnian Serb officials.

Bosnia’s recent history was marked by a bloody war that saw 100,000 casualties, with two million people becoming either refugees or internally displaced in a country of 3.5 million.

Drafted to bring the war to an end in 1995, the US-sponsored Dayton Peace Accords created two main administrative units in Bosnia — the Serb-dominated entity of Republika Srpska, or RS, and the Bosniak-Croat majority Federation of BiH.

The peace agreement also created one of the most complicated political systems in the world, with a dizzying maze of jurisdictions enabling the country’s three main ethnic groups to dominate domestic politics and exert control over key decision-making processes.

Fears of destabilisation have mounted in recent months as staunchly pro-Russia Bosnian Serb leader Milorad Dodik increased his divisive rhetoric, threatening to dismantle the country's multi-ethnic institutions and block its long-stated strategic goal of joining NATO, and advocating for the secession of the RS.

Dodik has been put under both UK and US sanctions that include a travel ban and an assets freeze.

The most recent sanctions, doled out by the UK in April for "irresponsible behaviour" that was deemed to have been further encouraged by the Kremlin, saw Dodik cut all ties with the UK ambassador in Bosnia, calling the decision "nonsense".

During the same month, Dodik had increased security measures in place at his residence and in front of the institutions in the RS de-facto capital, Banjaluka, including armoured police vehicles, citing fears of abduction by British forces.

"They used to take our people to these containers for ten, fifteen days, three months," he told the local press on April 16. "They turn on the lights, play loud music so you can't sleep and ask for you to confess."

Dodik's strong anti-Western stance has been repeatedly praised by Russia's ambassador in the country, who stated in March that if Bosnia achieves its goal of NATO membership, Moscow "will have to react to this hostile act."
Add Comment