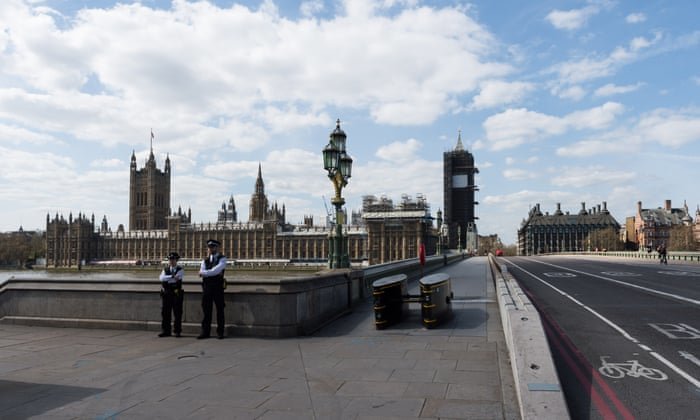 UK Covid-19 lockdown 'to be extended beyond next week'

Ministers voice concern Easter weekend could see change in public behaviour
Dominic Raab is expected to signal that stringent lockdown measures must remain in place beyond next week, in the first key government decision to be taken while the prime minister remains in intensive care.

The death toll from coronavirus is continuing to rise daily, with 938 UK fatalities announced on Wednesday – close to the highest daily figures reported in Italy and Spain. Medical experts are not expecting the peak to come for more than week.

With the long Easter weekend looming, ministers are concerned that any suggestion of an imminent loosening of restrictions could result in an immediate change in the public’s behaviour.

The Guardian has learned that at least five police chief constables want the government to consider toughening coronavirus lockdown restrictions amid concerns that a growing minority will flout the rules over the bank holiday. Options for more stringent curbs include preventing people driving long distances and legislation to enforce the government’s order to limit exercise to once a day.

Government sources suggested Raab, the foreign secretary deputising for Boris Johnson “where necessary”, would address the issue at Thursday’s Downing Street press conference – and prepare the public for an extension of the measures put in place on 23 March.

Legislation to implement the measures dictates that the health secretary, Matt Hancock, must also oversee a formal review of their impact by next Thursday – and another within three weeks after that.

Johnson, 55, was set to spend a third night in intensive care at St Thomas’ hospital in London on Wednesday night. While his condition was said to be improving – with Johnson able to sit up and talk to medics – Raab is now chairing the powerful four-man Covid-19 committee, which has continued to drive the government’s response to the crisis while the prime minister is in hospital.

On Tuesday, Raab declined to say whether a review of the restrictions would take place as planned next week, in the absence of Johnson. But the foreign secretary is expected to address the issue directly on Thursday, after a Cobra meeting in the morning – the first since the measures were imposed.

Current restrictions oblige the public to remain at home unless they are exercising, shopping for essentials or going to a job that cannot be carried out at home.

Pressure for clarity from the government intensified on Wednesday, as senior politicians from across the UK suggested the lockdown must remain in force.

Sadiq Khan, the mayor of London, said: “I think when the prime minister announced the lockdown just over two and half weeks ago, he said he would review it in three weeks’ time, which is this Monday. I think we’re nowhere near lifting the lockdown.

“In London we lost 224 lives [on Tuesday], so we’re still, I’m afraid, on a daily basis seeing too many people losing their lives. At the moment thankfully we’ve got some spare capacity in intensive care units in London but we can’t be complacent at all.”

In Northern Ireland, the communities minister, Deirdre Hargey, suggested the lockdown should remain in place “for the foreseeable future”.

Mark Drakeford, the Welsh first minister, told an online meeting of the Welsh assembly: “We will not throw away the gains we have made, and the lives we can save, by abandoning our efforts just as they begin to bear fruit.”

He added: “There is more work to do in reviewing the regulations. The precise nature of what will follow the current regime will be agreed over the coming days.”

Nicola Sturgeon also said that Scotland is not expecting to see an end to the lockdown any time soon. It is understood that evidence to the Scottish government does not support the idea that the peak of cases or deaths is imminent north of the border, and the expectation in Holyrood is that rigorous physical distancing is likely to have to go on for 12-13 weeks.

Sunak made clear at Wednesday’s press conference that the evidence is not yet available to enable politicians to lift the lockdown – and suggested formal confirmation of any extension may not come until next week. He said the Cobra meeting on Thursday would “talk about the approach to the review”.

“We committed that there would be a review in and around three weeks; that review will be based on the evidence and the data provided by Sage [the Scientific Advisory Group for Emergencies], which will only be available next week,” he said. “Our priority right now is to stop the spread of this virus: to get the other side of the peak,” he added.

That message was underlined by the government’s deputy chief scientific adviser, Prof Angela McLean, who said the government would need evidence about whether the entire “suite” of lockdown measures is working, before any decision to lift them could be made.
Add Comment