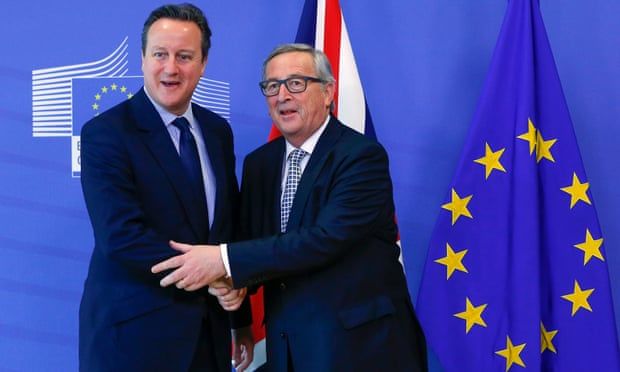 Exclusive: David Cameron’s government said to have been one of ‘biggest supporters’ of idea in 2016
The British government was one of the “biggest supporters” of EU plans to require non-EU nationals to obtain authorisation and pay a fee to enter the bloc’s passport-free travel zone, the Guardian has learned.

David Cameron’s government backed the idea when it was floated by the European Commission in April 2016, three months before the EU referendum, when few foresaw the €7 (£5.95) fee would one day hit British travellers.

Brexit supporters reacted with fury this week when the commission said plans for a European travel information and authorisation system (Etias) were on track to come into force for travellers in late 2022.

Despite claims of “Brexit punishment”, the idea, which is intended to increase border security, long predates Britain’s EU divorce and applies to citizens from about 60 countries.

Modelled on the US Esta scheme, non-EU citizens who do not require a visa will have to fill out a form and pay €7 before entering Europe’s passport-free Schengen zone. In 95% of cases approval will be given within minutes. If travel is allowed, the €7 fee – which applies to adults between 18 and 70 years, – covers multiple visits over three years.

The former Labour MEP Claude Moraes said the government had been keen on the idea. “The UK government was one of its biggest supporters, obviously prior to the referendum, and [Etias] was seen as part of the digital securitisation of borders that the UK wanted to lead on in the EU.”

Moraes chaired the European parliament’s home affairs committee, which was responsible for negotiating the Etias regulation with EU interior ministers.

The then home secretary, Theresa May, was understood to have supported the concept although she never expected to join, because the UK was outside the Schengen zone. If the UK had remained an EU member state, British nationals would be exempt from the form filling and charge – a special status that non-Schengen Ireland has today.

The UK’s former ambassador to the EU Sir Ivan Rogers said the UK would have been in favour, but added he did not have a detailed recollection. “As it was a Schengen-building measure, we would not have joined it. That applied to several Schengen-building propositions of which we said we were in favour, on good [Home Office] securocrat grounds.”

The former Europe minister David Lidington said: “I don’t remember exactly what our position was then on Etias – we were very much focused on the referendum campaign by that time. Having said that, our general approach was to encourage and support EU measures to strengthen aviation security in order to mitigate the risk of successful terrorist attacks.”

When May was at the Home Office, the UK was at the forefront of pushing the EU to adopt a law requiring law enforcement authorities to collect data on aeroplane passengers. The passenger name records (PNR) directive was co-written by the British Conservative MEP Timothy Kirkhope, spawning data-sharing deals with Australia and the US.

In April 2016 May said remaining in the EU “means we will be more secure from crime and terrorism”, as she praised the European arrest warrant and PNR law.

The government saw the Etias scheme as part of a security package that included PNR and EU databases, Moraes recalled. “That’s how they saw Etias as well, as modernisation of borders. Interoperability was the key dividend of Etias in the view of [the government] – that it would work with other EU-wide databases.”

When a traveller completes the Etias form, their data will be automatically cross-checked with other EU databases, including the Schengen information system, Europol, and the Eurodac fingerprint data store for asylum seekers.

The idea for a European travel authorisation system was aired at least as early as 2011 and gained momentum after terrorist attacks in Paris in 2015 and Brussels in 2016.

Despite scratchy relations between Cameron and the rest of the EU, his government voted in favour of most EU laws.
Add Comment