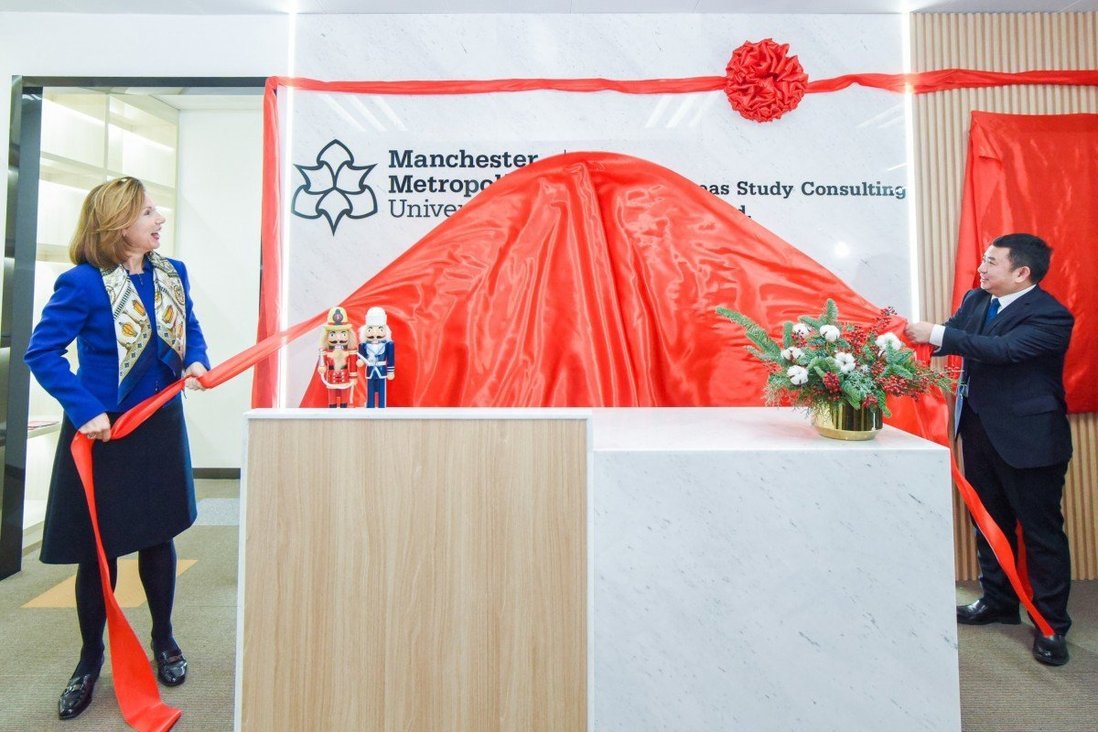 The British ambassador to China officiated the opening of new Chinese headquarters in Wuhan for Manchester Metropolitan University on Tuesday, as the city marked one year since the first coronavirus infections were reported.

The university’s vice chancellor, Professor Malcolm Press, said the university was focused on “tremendous opportunities in Wuhan”, where it would launch a joint institute with Hubei University next year.

The joint institute will launch one masters and three undergraduate programmes – all in the fields of science and engineering – for Chinese students in Wuhan.

Manchester Metropolitan University has had its Chinese base at Wuhan since June 2019 and its new premises next to the British consulate would help the university enhance its ties in China and promote study opportunities for Chinese students in Manchester, a university spokesman said. Manchester has been a sister city to Wuhan since 1986.

Revenue from British education exports reached £21.4 billion (US$28.8 billion) in 2017, according to the British Department for Education. China – where British universities run 229 joint degree programmes – is a major market.

According to the British Council, China sends nearly 108,000 students to study at British universities a year, more than the rest of the European Union combined. Roughly 41,000 Chinese students are also enrolled in British degree programmes in China.

Caroline Wilson, who took up her post as ambassador in September, presided over the opening ceremony during a four-day tour of the city.

Wilson, who posted video of her trip on Chinese social network Weibo, also attended a joint conference at Wuhan’s Huazhong University of Science and Technology, with representatives from Swansea University participating via videoconference. At the conference Wilson spoke to medical workers about the coronavirus pandemic.

“I was delighted to be able to exchange with frontline medics from both sides and to hear their admirable stories of fighting the pandemic,” she wrote.

Wuhan was the initial reported epicentre of the coronavirus pandemic with the first cases reported in December last year. In April, the municipal government put the city’s official death toll at 3,869. The city endured a tough 76-day lockdown at the beginning of the year.

It has not recorded any Covid-19 cases in several months.

Wilson told local media she was pleased to see Wuhan’s recovery from the outbreak.

“The people here have very lofty ambitions for the development of their city,” Hubei Daily quoted her as saying. “This left a profound impression on me.”

Wilson’s active presence on Chinese social media and her use of Mandarin have made her popular among Chinese netizens.

But she courted controversy in the West for posing for a photo with the Chinese ambassador to Britain, Liu Xiaoming, while holding a copy of a book of speeches by President Xi Jinping titled The Governance of China.

“On the one hand being fluent in Mandarin Chinese and a high degree of intercultural competence certainly helps to foster positive people-to-people relations,” said Professor Andreas Fulda, a senior fellow at the University of Nottingham Asia Research Institute.

“Yet on the other hand such soft skills are not a panacea when dealing with thorny issues.”

Steve Tsang, director of the SOAS China Institute, said it was a good thing for a British diplomat to project a positive image of Britain in China.

“The increase in tension in UK-China relations over Hong Kong and other issues means that there is a good case for Caroline Wilson to get on a ‘charm offensive’,” he said.

“She will not be given any serious concession because she has been charming,” he added. “But she knows that.”