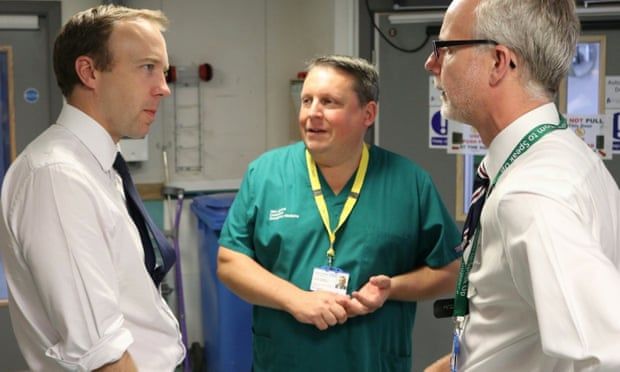 Pair leaving posts ahead of publication of review into search for whistleblower at Matt Hancock’s local hospital
Two directors at Matt Hancock’s local hospital are to step down, it has been announced ahead of the publication of a delayed review into a “witch-hunt” for a whistleblower involving an unprecedented demand for fingerprints from senior clinicians.

In January 2020 a “rapid review” was ordered into claims of managing bullying at West Suffolk hospital trust which the health secretary had to recuse himself from because of his friendship with the trust’s chief executive, Steve Dunn.

Days before the review is expected to be published, Dunn emailed staff to announce that two of his colleagues on the board were due to stand down early.

The email said that the medical director, Nick Jenkins, would be stepping down from the role at the end of next month to support his family through a period of illness, but would continue to work part-time at the trust as consultant. It also said the trust’s chief operating officer, Helen Beck, would retire at the end of November.

The NHS has been criticised for the time it has taken to publish a review that had initially been promised last April, but was delayed because of the pandemic. In December the Doctors’ Association UK said it suspected the conclusions were being sat on because they are likely to make embarrassing reading for Dunn, who once was described by Hancock as a “brilliant leader”.

Dunn was urged by the Royal College of Anaesthetists to end the “toxic management culture” after the Guardian revealed that trust had demanded fingerprint samples of senior clinicians in the hunt for a whistleblower who had tipped off a family about a potentially botched operation.

John Warby, whose wife, Susan, died after an operation in August 2018, was sent an anonymous letter highlighting errors in her procedure. A coroner concluded that errors in her care had contributed to her death. This led to a search for the whistleblower, which health unions described as a “witch-hunt”.

The incident, and other failings in patient safety, contributed to the hospital in January becoming the first ever to be relegated by Care Quality Commission (CQC) inspectors from “outstanding” to “requires improvement”.

Weeks before Warby’s operation, Patricia Mills, a consultant anaesthetist at the trust, had, along with a number of other colleagues, formally raised the alarm internally about patient safety over a doctor who had been seen injecting himself with drugs.

As the same doctor was involved in Warby’s care, Mills, along with other colleagues who had complained, was immediately suspected by those investigating the leak of alerting her family to the errors.

Mills has consistently denied this. But managers demanded that she and other senior staff provide fingerprint and handwriting samples to prove it.

In an email seen by the Guardian, Beck had warned Mills that any failure to provide fingerprints “could be considered as evidence which implicates you as being involved in the writing of the letter”. Despite the email, Dunn claimed staff had not been threatened to provide fingerprints, and that the request was only voluntary.

A spokesperson for the trust pointed out that it has not been given a copy of the review, which was led by Christine Outram, chair of the Manchester-based Christie trust.

Dunn said: “On behalf of the board I would like to thank both Nick and Helen for their dedication and leadership over many years.

“We are pleased that Nick will remain as a valuable member of the trust’s consultant body and we wish Helen all the very best for her retirement at the end of the year.”

Dr Jenny Vaughan, chair of the Doctors’ Association UK, said: “Doctors that approached DAUK said they felt persecuted. The concern is that this long awaited report has still not seen the light of day and less than 60% of West Suffolk staff feel they are treated fairly when they raise patient safety concerns.

“We note recent events but we agree that family should come first for the medical director. The report we hope will be totally rigorous when it comes to examining the actions of the executive. We look forward to seeing the report as soon as possible.”