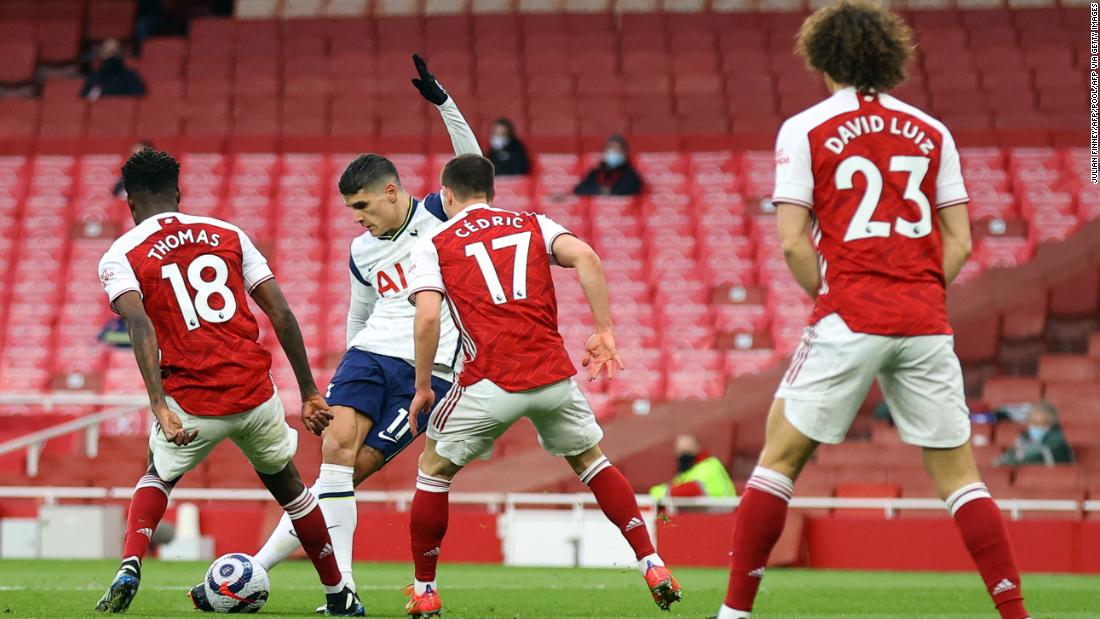 Tottenham's Erik Lamela produced an outrageous piece of skill to score a rabona goal but was later sent off in the North London Derby, as Arsenal beat its rivals 2-1 on Sunday in the Premier League.

The Argentina international squirmed the ball through the legs of an opponent and into the bottom corner to give his side the lead, but Martin Ødegaard leveled just before half time.

Alexandre Lacazette's penalty midway through the second period gave Arsenal the lead before Lamela was sent off 10 minutes later after being shown two quick yellow cards.

After the defeat, Tottenham manager Jose Mourinho criticized referee Michael Oliver after awarding the second half penalty, whilst also admitting his side didn't play well enough in the opening period.

"We played really bad in the first half," he told Sky Sports afterwards. The 1-1 was not a fair reflection of the first-half. We were poor. Defending bad. No intensity or pressing.

"Some important players hiding. Really bad. In the second half, we only had space to improve which we did and then it is a question -- but an impossible one as they don't speak -- for the referee Michael Oliver to answer. Probably Paul Tierney too as he was the VAR.

"What I see from the bench is just a feeling at first. I am 40-50 meters away. I saw it on the iPad. Referees have a difficult job sometimes. I did not complain but when I watch back on the iPad it is what it is. If somebody has a different opinion it has to be one of the big Arsenal fans with a season ticket. It is the only one I accept as it is the passion speaking. Other than that I don't accept a different view as it is obvious." 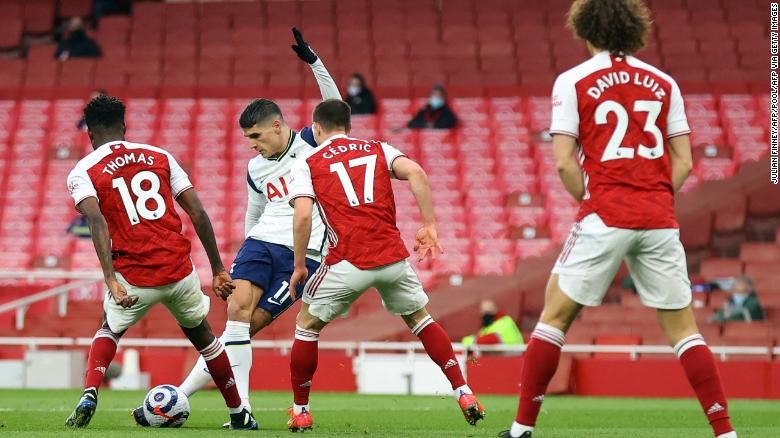 The North London Derby is the biggest game on the footballing calendars for both clubs and both would have wanted their best players fit and firing.

However, when the teams were announced shortly before kickoff, Arsenal captain Pierre-Emerick Aubameyang was on the bench, with manager Mikel Arteta confirming that he had planned for Aubameyang to start but was dropped due to a "disciplinary issue."

According to reports from The Athletic, the Gabon striker reported late when the squad met up earlier today.

However, following 15 minutes and consistent Arsenal pressure -- during which former academy player Emile Smith Rowe smacked the bar with an outstanding long shot -- Tottenham was down a star player, too. 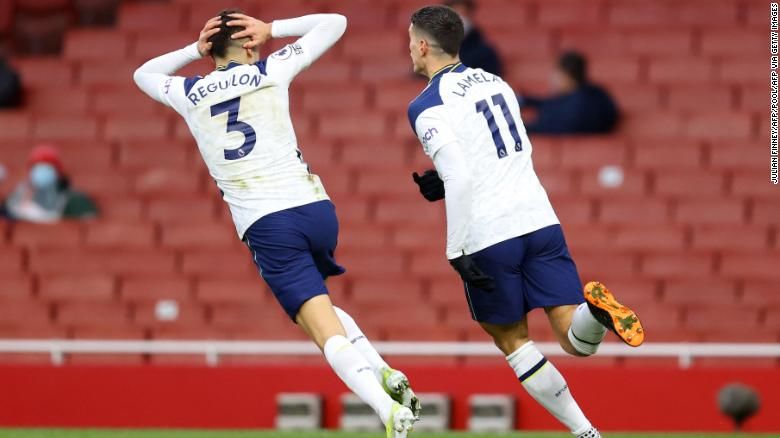 After sprinting to chase a speculative long pass from defense, Son Heung-Min pulled up clutching his hamstring before hobbling off to be replaced by Lamela.

And it proved to be an inspired substitution.

The Argentine, without controlling the ball, hit a delightful rabona -- where a player wraps their kicking leg around the back of their standing leg -- through the legs of Thomas Partey and into the bottom corner.

The display of outrageous skill seemed to kickstart the match after a slow opening, with Cedric Soares smashing the post minutes later with Hugo Lloris standing helpless.

Parity was restored on the brink of halftime, and it came from Arsenal's dynamic left-hand side. Having broken away from his defender, Kieran Tierney put in a low cross and Ødegaard's deflected shot squirmed past the despairing Lloris. 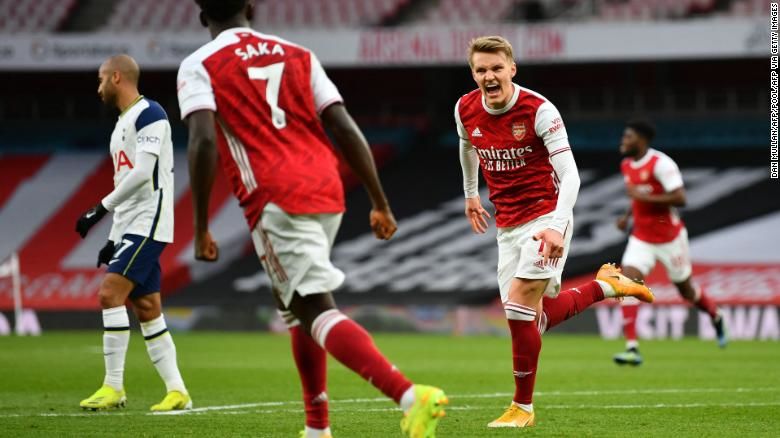 Ødegaard (right) celebrates after scoring the equalizing goal against Tottenham.

The second half started with little to separate the two teams until Davidson Sanchez's rash challenge on Lacazette following a miscued shot from the Frenchman gave him the opportunity to give the hosts the lead.

After the game, the 29-year-old admitted to Sky Sports that Arsenal was "lucky to get the penalty." However, he duly stepped up and converted.

For Lamela, it was a case of hero to zero.

Having opened the scoring with a wonderful piece of skill in the first half, he was shown two yellow cards in relative quick succession for two fouls which sent him for an early shower. 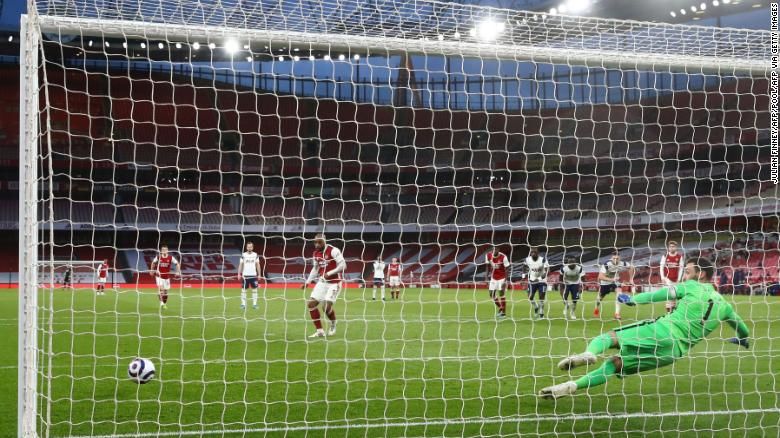 Lacazette shoots from the penalty spot to score his team's second goal.

Despite going down to 10 men, and having done relatively little throughout, Tottenham's superstar striker Harry Kane thought he'd grabbed a late equalizer with a fine headed finish, only for the offside flag to rule it out.

There was even more late drama as Kane struck the post with a freekick in the dying moments and the follow-up was blocked with the goalkeeper floundering.

"Full credit for the way we have done it today after two days coming back from Europe," Arteta told Sky Sports afterwards. "It was incredible. Going 1-0 down the way we were playing was disappointing and worst case scenario against a team like Spurs. But we kept playing and deserve the win.

"Last 10 minutes we did not manage the game and we need to improve on as a team. We relied on luck. With the way we played we should have seen it out comfortably."